G’day all, today I had a very greasy landing in Dubai after doing some testing and practicing. I have been practicing landing without the autopilot. I know the landing was late but it was worth it.

I was flying on solo from Dubai to Dubai in the Emirates Boeing 777-200LR at noon.

All Images and videos are Copyright © 2019 by Qantas094. All rights reserved.

Very nice landing but I believe the proper term would be “Butter”. When all aircraft get truck tilt butterizing the 777, A330, etc. will be so much easier. I sometimes have difficulty buttering a 737.

Thanks mate but this is the meaning of butter.

Butter is a dairy product with high butterfat content which is solid when chilled and at room temperature in some regions, and liquid when warmed. It is made by churning fresh or fermented cream or milk to separate the butterfat from the buttermilk. It is generally used as a spread on plain or toasted bread products and a condiment on cooked vegetables, as well as in cooking, such as baking, sauce making, and pan frying. Butter consists of butterfat, milk proteins and water, and often added salt. 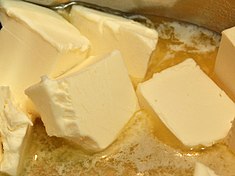 Most frequently made from cow’s milk, butter can also be manufactured from the milk of other mammals, including sheep, goats, buffalo, and yaks. Salt such as dairy salt, flavourings such as garlic and preservatives are sometimes added to butter. Rendering butter, removing the water and milk solids, produces clarified butter or ghee , which is almost entirely butterfat.

Butter is a water-in-oil emulsion resulting from an inversion of the cream, where the milk proteins are the emulsifiers. Butter remains a firm solid when refrigerated, but softens to a spreadable consistency at room temperature, and melts to a thin liquid consistency at 32 to 35 °C (90 to 95 °F). The density of butter is 911 grams per litre (0.950 lb per US pint). It generally has a pale yellow color, but varies from deep yellow to nearly white. Its natural, unmodified color is dependent on the source animal’s feed and genetics, but the commercial manufacturing process commonly manipulates the colour with food colourings like annatto or carotene.

Yeah, grease also has a different meaning that doesn’t belong in aviation but people still use it xD, I’ve honestly, and I’m not making this up, never seen anyone use the term “grease” outside of IFC xD.

He was saying that the term ‘butter’ is commonly used in aviation when a smooth landing was made :/.

The butter and grease war is a real thing that should be spoken about on the news xD.

I think grease is used as a hard landing and butter is the complete opposite, so no wars are needed yet.

Technically should’ve been a go around as you’ve missed all the marks by some distance but hey ho :)

Yeah but it was worth it in the end, plus I was testing it and found out I only need like 1,000 feet of runway.

Whatever the term is, a firm landing in the touchdown zone is always better, and safer that greasing, or buttering it half way down…

Hey there, that type of language is not recommended here. Everyone has different perceptions of words, maybe even considering them unrelated to certain things like aviation (in which educating is better than complaining on them not knowing if it actually is related to that or aviation) :/.