The aircraft, originally believed to be operated by Ariana Airlines when it came down near the Afghan capital of Kabul. However, later reports show images that suggest it was a Bombardier E-11A, on a mission for the US Air Force.

Arif Noori, spokesman for the provincial governor, said the plane went down around 1:10 p.m. local time in Deh Yak district, which is held by the Taliban. Two provincial council members also confirmed the crash.

The number of people on board and their fate was not immediately known, nor was the cause of the crash.

Ariana Airlines, Afghanistan’s national carrier, dismissed the claim that one of their planes had crashed in a statement on their website, saying all their aircraft were operational and safe. Ariana Afghan Airlines’ acting CEO Mirwais Mirzakwal on Monday denied reports by Afghan officials that one of its planes had crashed.

“There has been an airline crash but it does not belong to Ariana because the two flights managed by Ariana today from Herat to Kabul and Herat to Delhi are safe,” Mirzakwal told Reuters.

The mountainous Ghazni province sits in the foothills of the Hindu Kush mountains and is bitterly cold in winter.

The flight is thought to have been operating a service between Kandahar and Kabul at the time of the crash. 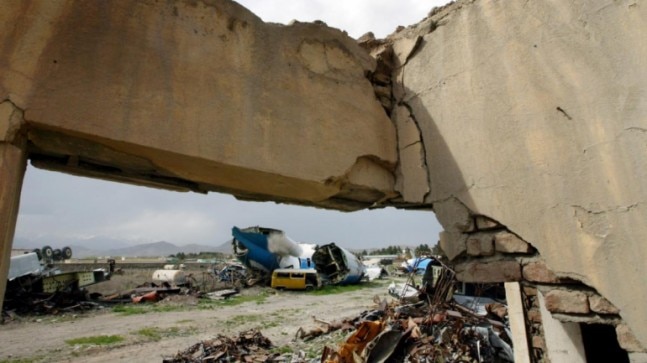 The number of people on board and their fate was not immediately known, nor was the cause of the crash.

An aircraft has reportedly crashed and caught fire in eastern Afghanistan, but details remain unclear.

This is a breaking story and will be updated as further details are uncovered.

Something is really off hear. This states “2 pilot bodies” were found but no passengers?

Some sources are reporting there was no crash or that it wasn’t a 737, but was rather a 767. Sounds like cargo?

Plane goes down in Taliban-held territory in Afghanistan

Ariana Afghan Airlines flatly denied reports that one of its jets had crashed south of the capital, and there was no indication of mass-casualties.

I don’t think it’s a 727 since there’s no middle engine on the tail. It looks more like a CRJ

It could also be a 717 ??? I heard about this a couple minutes ago and thought I would check the forum and see if there was something I had missed.

Considering the nature of this story, your “haha got you to click” spoiler is absolutely ludicrous & a disgusting “joke”. Have a bit of humanity about yourself & respect the two lost souls rather than attempting humour.

This isn’t a 737, it has rear mounted engines on what looks to be a bombardier tail…

Based on the picture, it appears to be an E-11A BACN aircraft, known to operate in that part of the world.

Yeah agree, it’s definitely bombardier however it could be any number of Military aircraft if it hasn’t been claimed by an airline. BACN & Sentinel to name just 2.

But only the BACN has those two colored stripes which match the picture.

Again I agree however we cannot assume one or the other until the USAF (the only user of BACN that I am aware of) acknowledges this.

Asian Intel says that “More unofficial Taliban channels are claiming “that a U.S. aircraft was shot down by Taliban in Dahiek district of Ghazni province”. The channels also claim “the area has been sealed by Taliban forces.”

Here is a better screenshot found on on social media.

“The aircraft, originally believed to be operated by Ariana Airlines when it came down near the Afghan capital of Kabul. However, later reports show images that suggest it was a Bombardier E-11A, on a mission for the US Air Force. “

Well, the question now is if it crashed or was shot down

Well the Taliban are a terrorist group, so it probably leans more towards shot down.

Well they certainly could have just taken the blame. It could have been a mechanical failure, pilot error, then the Taliban comes out of nowhere and says “We shot this plane down!”. I don’t know why but the Taliban sure loves waging war against first-world countries.

That’s pretty much all they know, is war.

This is a breaking story and will be updated as further details are uncovered.

Out of respect to the victims, it would be irresponsible and insensitive to speculate on the cause of the incident without enough facts. Prayers to their loved ones.

Let’s not make assumptions about what happened here. We barely know any information and to refrain from this topic being closed, we must avoid speculations. Unless it is a confirmed fact, then we should refrain from saying it!