I have notice that sometimes at altitudes between FL280 - FL430, winds have been 150kt +. The other day, I flew KMDW-KSRQ with a 152 kt crosswind. That is considered a C4 or C5 hurricane IRL. Anybody have a reason or maybe an admin who may understand. The amount of shaking and swaying as well it causes sometimes is strong enough to blew you well off course and the plane has trouble intercepting the flight plan again.

How do you know it’s unrealistic and wasn’t the actual conditions?

I was looking at FR24 and planes were flying through the area just fine. I also was curious and looked at multiple weather radars and never saw winds even within a ballpark of that number.

Take a look under WINDY and enter the altitude, the FL and then look how strong the wind is or was =)

topics like these have been created many times in the last few days, it isnt’t ‘unrealistic’ as IF gathers weather data from real life… you can use apps like windy to check if they are realsitc…

take a look at this topic already created hopefully this answers your questions :D Realistic weather

Seems about right, no? 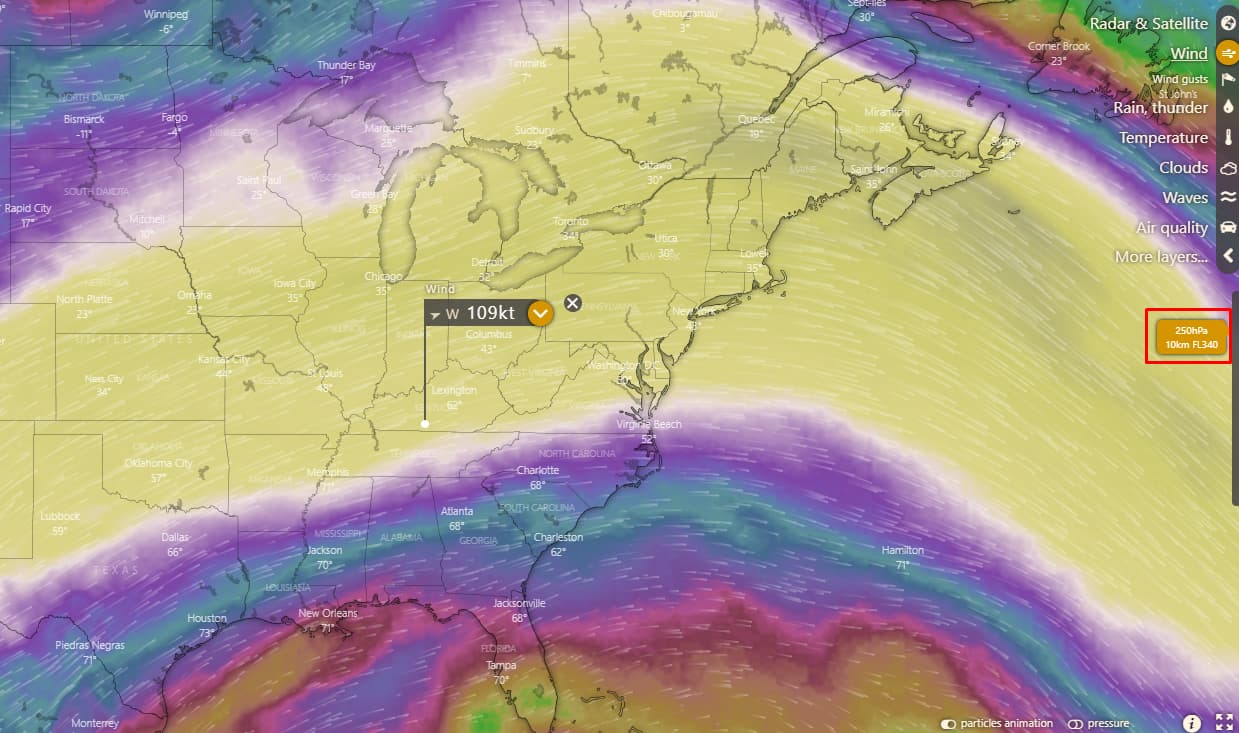 The winds are definitely more strong up there. Also, they’re usually more straight and calm-ish than a hectic, random hurricane.

It’s not considered as C4 - C5 hurricane these winds are quite normal in routine flights.

As others have pointed out, if these winds were on the surface it would be a hurricane.

Right near the ground, air doesn’t move easily. there’s trees, buildings, even grass to cause drag and keep the air (relatively) stationary. As you move up a few thousand feet, there’s less drag. The only drag comes from the air below… once you get up to where the jet streams are, the air can easy surpass 100 knots. If the air is all moving in the same direction at the same speed, it’ll be pretty smooth… you’ll hardly even know there’s so much wind if you don’t look at the instruments.

Thanks for all the input. I understand the winds are stronger but I still question the aircraft reactions to that wind are unrealistic. The winds cause aircraft banks of over 5 degrees at some points and causes trouble maintaining a steady flight. I think that should be looked into by the IF crew. Turbulence is normal and some swaying is fine but if these are normal winds and planes IRL act like this, no plane would be able to fly through it.

This. The winds are pretty realistic, but the way the aircraft reacts is sometimes not. Sometimes, the aircraft bobs like a boat in a storm, but aircraft IRL usually never do this.

Yes. Even when flying in 30-50 knot winds, it’s bobs around like a row boat in a hurricane. Whereas, in real life, it can be windy but the plane still doesn’t rock around and we can still get up and move around.

Idk, I’ve been in some planes that do that lol

I started a transatlantic westbound flight earlier. Had these types of winds over the British Isles about until entering the NAT area.Obviously as we’ve discussed the wind speeds are normal, but I would point out that these are on the top end of normal. I was listening to Shannon Center on LiveATC.net, and many aircraft were reporting moderate-severe turbulence. There was also a SIGMET (forecast of significant weather) which forecasted areas of severe turbulence, which is defined as turbulence that caused abrupt changes in attitude or altitude, and can cause temporary controllability issues which I guess could potentially include this roll some people are talking about that I also witnessed. I do agree though that maybe the A/Cs response to wind is a little over exaggerated, just not sure if it is as bad as people think it is.

wow that got long quick…

I wish I had the replay to simply prove how bad and unrealistic the swaying was. Wing flex and such is normal but it was the banking and such that I believe is unrealistic. I think we’ve reached a conclusion:

I honestly think its really annoying and experience ruiner. I just wanna see maybe some wing flex and a calm cruise over land, i hate it when it rocks back and forth so violently. Ive even resorted to flying solo and purposely setting winds as 0, but neither is that realistic.