Plane rises from the ground with passengers I did not find the page in English, but you can see photos and video 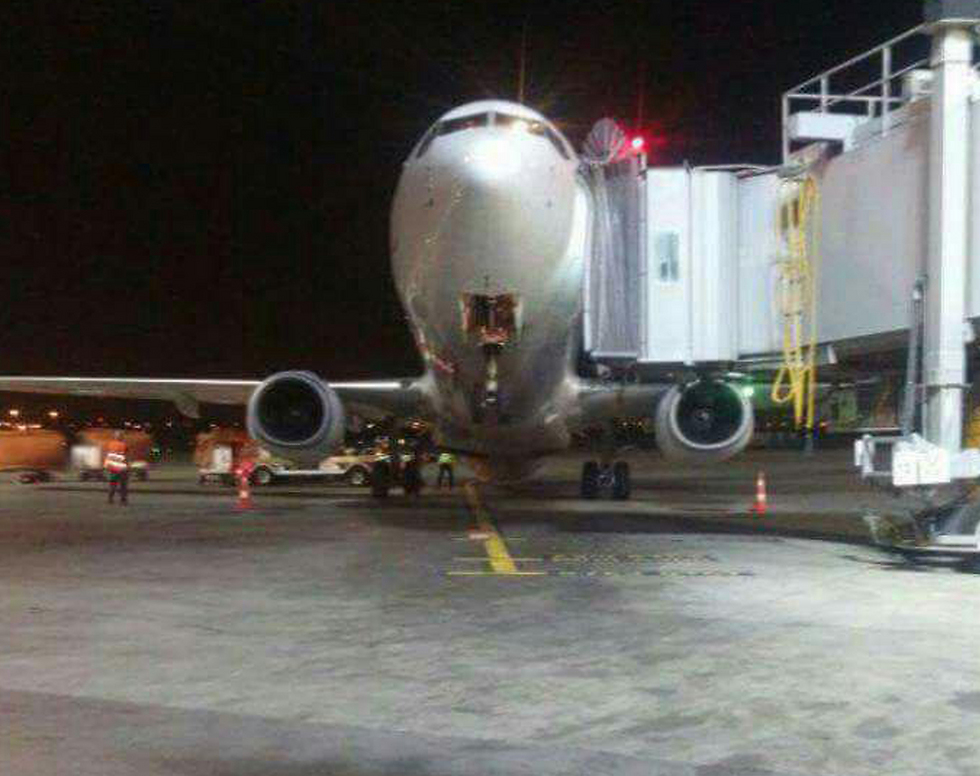 I don’t know Hebrew, but I am not sure that should happen. Quite abnormal.

Nice, I read about 1/2 the article (I know a handful of hebrew)

Why on earth was the 737 lifted up? Was it not fitting the gate?

@NatIsrael972 what is in the article

With Passengers Inside: Plane lifted while still connected to the jetway

Damage was caused to the Ukraine International Boeing 737 due to improper distribution during the loading of cargo. The authorities said that there were no passengers onboard the plane but Ynet found out that there stewards started screaming hysterically and was traumatized.

Serious Safety Incident at Ben Gurion: The front of the Boeing 737 passenger plane of Ukraine International rose up and struck the jetway at Terminal 3. The reason: improper loading of cargo in Ukraine. The incident occurred while passengers were onboard the plane even though, according to the information provided by the authorities, the passenger plane was empty. No one was hurt, but the plane was damaged. The chief investigator of the accident reported to the Ministry of Transport and began tests.

The plane landed in Ben Gurion Airport last night after midnight and the front rose up while the jetway was connected. The initial investigation indicates that the plane went out of balance after the passenger cell(?) has been discharged from the wrong weight distribution belly of the plane. However, Ynet emphasizes that passengers were on the plane. located in the damaged part of the front door.

Nose in the air. Night at Ben Gurion Airport

Damage to the front door

Michael Greenstein from Petah Tikvah landed Tuesday at Ben Gurion Airpor after a vacation with friends in Kiev and described the hysteria that took place inside the plane. “The plane landed and was already in place, and suddenly we felt a sharp rise. The plane was falling then it happened again. Flight attendants started screaming hysterically, telling everyone to move to the front of the plane but because they spoke in Ukrainian and their English is not clear, we could not understand them.”

Greenstein also said that there was panic on the plane and everyone was screaming. I sat at the end of the plane, and because they all were, I could not move because all of them were in the aisle and tried to get their bags from the cabin compartments. It was very traumatizing and frightening.

According to her, when people began to realize what was happening, they started shouting in Hebrew, “Move quickly forward because the aircraft rises”. Throughout the time, no one from airline let us know what happened. We only discovered the incident after we entered the terminal. My anxiety peaked and it traumatized me for a long time.

After the incident, the aircraft was towed to a parking area and was examined by representatives of the company who will later decide if it was fit to fly or grounded for repairs. Ground staffs of the Airport Authority were called and worked for several minutes to recover the aircraft and remove it from the jetway.

Airport Authority noted that the Ukrainian airline reported that after the incident, passengers got off the plane, but it turns out that passengers were still on the plane and prepared before terminal decline(?)

Coincidentally, scheduled for tomorrow morning at Ben Gurion is exercise Magellan which simulates a passenger plane crash at the airport. The exercise, led by members of the Airport Authority, Ministry of Transport and the Israeli Police are used to all the possible situations during an Israeli air disaster. Even seinor representatives from major airports around the world watch in one of the largest exercises conducted at Ben Gurion Airport.

Mostly from Google Translate, a little edit here and there but still with some incomprehensible parts

As Hebrew has no capitalization, there is no grammar rules for the capitalization - they are all put in by me to fit the translation

Wind probably, a month ago it happened to 2/3 united 737s in Austin there was a 3rd their but my uncle put on the brake, the two that were caught in the wind had no one on them and had their wings ripped up as well as the engines