Doesn’t seem to say what the strength or weather was…

Anyway, I thought it was blood. Someone must of been very injured. But it could of been Juice or Ice Cream.

Either that or someone took “fasten your seatbelt” a little bit far.

Nope…blood…but a cut in the head is bleeding a lot, cause it has a lot of blood vessels, looks bad, but mostly it isnt…hurts for sure…

Was that in a 777? But fortunately no one dies

I bet that was a scary incident.

I was caught off guard by some unexpected turbulence over the Atlantic a few years back (Delta 767). I was launched straight up against the overhead panel and it hurt. A lot. No cuts or blood thankfully.

Since then I keep my seat belt fastened tight all the time - but even then the sheer amount of luggage that came out of the luggage bins was rather worrying…
I think carry on luggage can be about 5kg in weight. That would hurt if it dropped on your head.

Thai Airways International Public Company Limited, trading as THAI (SET: THAI, Thai: บริษัท การบินไทย จำกัด (มหาชน)) is the flag carrier airline of Thailand. Formed in 1988, the airline has its corporate headquarters in Vibhavadi Rangsit Road, Chatuchak District, Bangkok, and primarily operates out of Suvarnabhumi Airport. THAI is a founding member of the Star Alliance. The airline is the largest shareholder of the low-cost carrier Nok Air with a 39 percent stake, and it launched a From its hub a...

11 April 2016
A Thai Airways Boeing 777 hit a severe bout of turbulence en route from Jakarta to Bangkok. At least five crew members and one passenger needed hospital treatment, which was covered at the airline’s expense. Service trolleys, luggage and other personal items were thrown around the cabin, as evident in photo’s uploaded to social media. The Airline issued a statement apologising to passengers and praising the efforts of the pilots

EDIT : It’s confirmed that it was blood 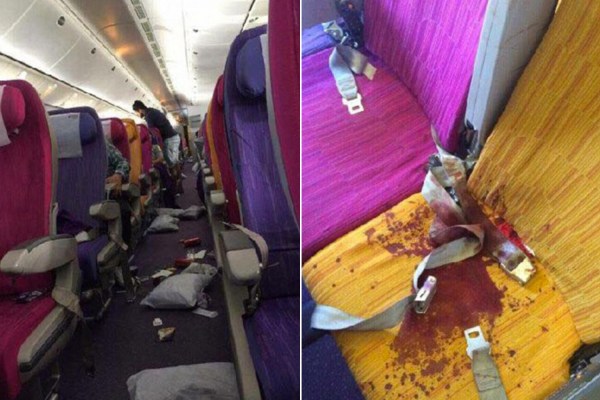 Blood splattered on seats and luggage in the aisles: Shocking photos reveal...

Blood splattered on seats and luggage in the aisles: Shocking photos reveal aftermath of severe turbulence


There are 72 people on board and 12 crew on board (Didn’t expect a high traffic between Jakarta and Bangkok via THAI, many peoples are choosing to use AirAsia instead)
dkennedy82 April 15, 2016, 3:52pm #14

Rough day. Hit some serious weather (a modest typhoon, apparently) on approach to HKG a couple years ago on a 777- everyone screamed, FA crawling up the aisle to her seat, etc. I’ll be more than happy to never experience that again, and was very appreciative of the delay in getting a ferry across to ShenZhen, gave me time to find my stomach.