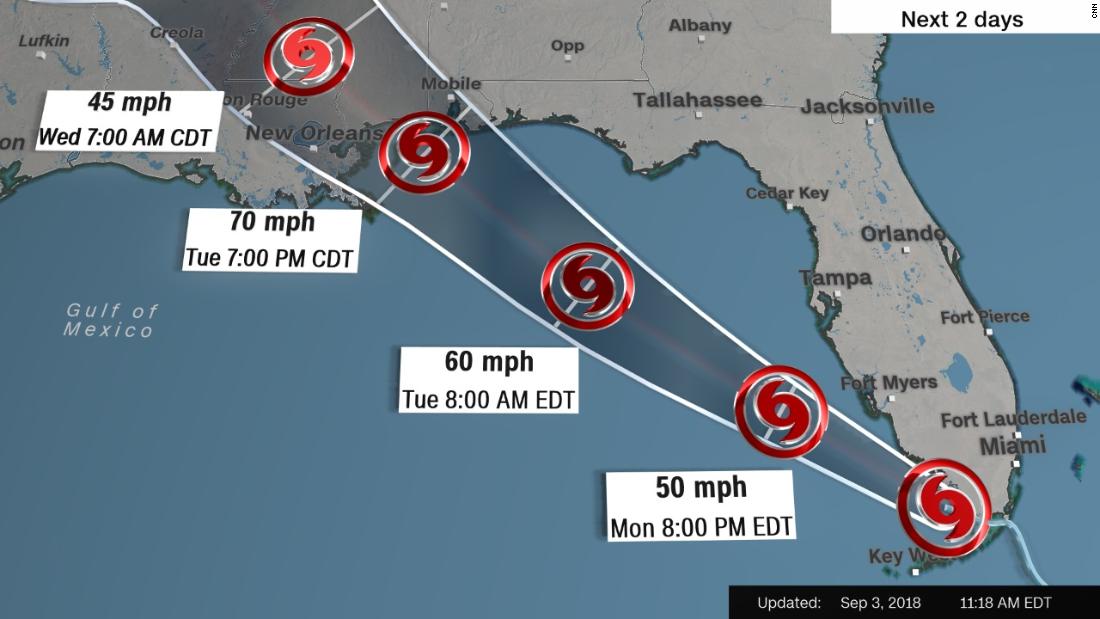 Much of the central Gulf Coast was under a hurricane warning late Monday as Tropical Storm Gordon, which is expected to strengthen, continued its march from the Florida Keys.

A tropical storm watch has been issued for parts of the Gulf Coast as a potential cyclone brews east-southeast of Marathon, Florida.

The National Hurricane Center said Sunday evening that it is tracking Tropical Cyclone Seven. The[ weather system was 115 miles east-southeast of Marathon] and had maximum sustained winds of 30 mph at about 2 a.m. ET on Monday.

It was moving west-northwest at 15 mph and is forecast to pass over the Florida Keys Monday afternoon, emerge over the southeastern Gulf of Mexico by Monday evening and reach the central Gulf Coast by late Tuesday night

The system is likely to strengthen into a tropical depression Monday morning, then a tropical storm with the name Gordon by Monday evening, CNN Meteorologist Gene Norman said.

A tropical storm watch has been issued for portions of the central Gulf Coast from the Alabama-Florida border westward to east of Morgan City, Louisiana, including Lake Pontchartrain.

“Potential Tropical Cyclone Seven will bring heavy rainfall and gusty winds to portions of the Bahamas, South Florida, and the Florida Keys tonight and Monday, and interests in those areas should monitor the progress of this system,” [the National Hurricane Center said Sunday.]

It warned that heavy rainfall from the system would affect portions of the central Gulf Coast later in the week.

I have not heard of this storm, thanks for letting me know

It was just named a couple of minutes ago

I’m go from KMIA and fly around in a USCG plane. On expert.

Hmm it’s too weak for any fun for me.
I may hit up typhoon Jebi in japan

Typhoon that is coming tomorrow right?

Yeah the one coming towards the Kansai region

Maybe it will do what Harvey did. Dissipate randomly before hitting land, then come back as a category 4 🤷🏼‍♂️

gordon is moving at twice the speed of harvey, however there is very low wind shear as well as warm gulf waters… i could see gordon being a low end cat 1

Looks like it’s expected to strengthen to a hurricane before making landfall.

Flew through the eyewall today. It was windy, but tolerable, wouldn’t recommended to any plane smaller than a Cessna Citation X.

Welcome folks to this thread, where you will find upcoming or active cyclones throughout the world. @HurricaneTracker500 will be helping me maintain this thread so all of you can enjoy the challenge of flying near/into a cyclone. If you aren’t experienced with high velocity wind I wouldn’t recommend attempting this! To help keep this thread uncluttered please use the following format when posting about a cyclone. Cyclone name: Cyclone category: Current location: Expected path: Wind Velocit…

Oh wow!! Thanks for letting us know.