The 2017 Virtual Airline Awards! | THE RESULTS ARE IN! | Sponsored by IFNEWS.co.uk

The creation of this is approved by @JoshFly8 of the IFVARB. 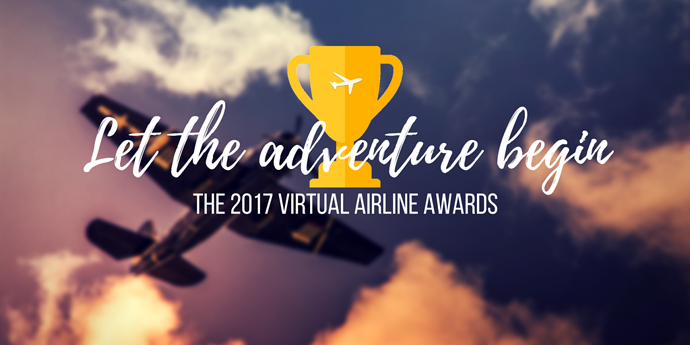 Good day fellow IFC members! I present you with The 2017 Virtual Airline Awards. How this works is: I created categories. You then nominate a virtual airline to win each category (maximum 2 nominations per category, you can nominate your own VA) and then on Monday morning (American time), voting will begin. After 3 days of voting, votes will close and then a winner will be announced for each category! There is no official prize, just bragging rights (Voted best/most ____ by the 2017 IFC) and publicity for your VA.

The categories are below:

-Best VA Website
-Most Professional VA
-Most Caring VA
-Best Overall VA
-Most Organized/Put Together VA
-Best Fictional VA (a VA not based off of a real world airline)
-Most Active VA
-Best VA partnership (this would be 2 VA’s that are partnered with each other)
-Most Unique VA
-Most Fun VA
-Best VA to be a pilot for (this would be a VA that offers good conditions, benefits, events, etc. for their pilots)

Thank you all for taking the time to read, and best of luck!

I’m choosing for most fun VA as NetJets Virtual. They really have their ballgame together and I have done some group flights with them and boy are they energetic and amazing to be around.
@NetJets_Nick @Flightfan84 you guys have created one of my favorite small VAs to hit the forums. Well done guys.

Nominations for NetJets:
Most Fun VA

My votes are as follows:

I vote Travelsky for all of it 👀

Well the VA that took the cake for their appearance of there post.

Was Lufthansa don’t know what category that would be under.

Frontier
-Best Overall
-Most Organized/Put Together

Which awards do you want to nominate them for?

Professional, caring and fun. It’s always good looking through their threads at how a VA should be ran.

I think there should be best new comer

The AeroSync Group has my vote for Most Professional VA, Most Organized/Put Together VA, Best VA not based off a real world airline, and Most Unique VA.

I’ve just been on the line with William Hill and they’re offering me pretty good odds on Aerosync :)

This sounds a really nice idea and a lovely way of celebrating Virtual Airlines on the IFC, however I have a few reservations.

Although I 100% support, on behalf of BAVA , the idea of an award system to celebrate positive contributions to the IFC and the VA category, I feel that on this occasion, BAVA won’t be taking part.

However, I will take the opportunity to commend Frontier VA, Air France VA and also the USCG VA, who I really do join BAVA in leading the way in virtual airline operations on Infinite Flight.

Best of luck to all whose involved!! See you in the skies!

This looks like a great idea! I wish I had a VA to nominate:-/

Okay I said I wouldn’t but I have to as it isn’t fair to my pilots and staff to do otherwise. Please don’t get the wrong idea and think I’m just trying to puff myself up. This is for the entire team. No one man could have done what FVA does as a family and team.

Nominations For Frontier Virtual:
Most caring VA (we work as a solid tight knit family)
Most fun VA (just check our chats if you ever join. Boy do they get wild lol)
Most Unique VA (I have to with our animal tails)
Best VA to be a pilot for (I love every single of my pilots and flying with them is some of the most enjoyable times of my IF career)

Remember guys, these are only nominations. Voting begins in about 4-7 days, who knows, I didn’t expect a huge surge in nominations so maybe sooner!