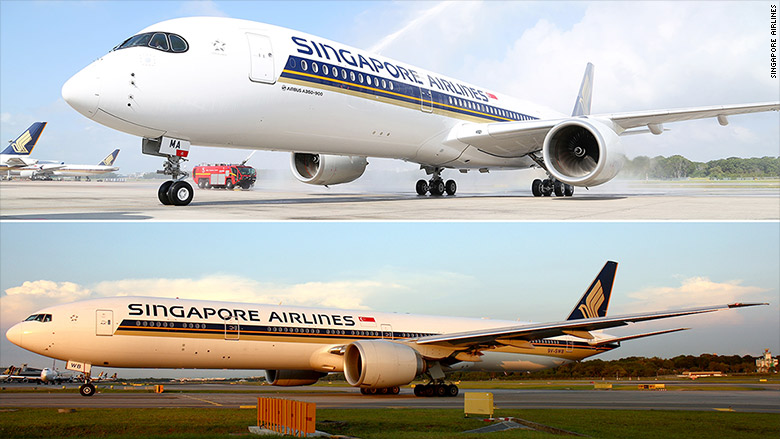 Singapore Airlines is set to decide by the end of the year on a new jet from Boeing and Airbus that could become the world's longest.

[quote]Boeing and Airbus are holding a paper airplane contest. A very expensive one. And the winner may get the chance to build the world’s longest jet.
The U.S. and European aerospace giants are vying for a coveted spot in the fleet of Singapore Airlines.
By the end of the year, the airline is expected to back one of the company’s designs, according to three people familiar with the campaign.
There’s a “pretty fierce campaign for this” order from Singapore, said one of the people.
At the moment, the Boeing (BA) and Airbus planes exist largely as PowerPoint presentations that are being evaluated by engineers at Singapore Airlines.
Both planes would be the longest twin-aisle jets ever built and the biggest with just two engines. Nose to tail, they’ll be nearly the length of a football field.
Airbus’ A350-2000 would be nearly 258 feet long and seat 400 passengers. Boeing’s 777-10X would be 263 feet and hold 450, in standard arrangements. That’s about 30 and 50 passengers more, respectively, than the current largest A350 and 777X jets.
While both jets may earn the title of world’s longest, they won’t carry the most passengers. The four-engine Airbus A380 has the distinction of being able to hold more passengers than any other airliner, carrying about 550 people on two decks. [/quote]
I’m calling Boeing if SQ is looking for a one-size-fits-all long-haul aircraft to replace the A380 and 77W fleets.

I’m calling Airbus if SQ is looking for a short-haul aircraft to abuse.

The wild card would be Boeing offering a 777X with capped wingtips instead of the folding ones and reinforce the wing for high-cycle use. If not, the A350-2000 wins on short haul. I would imagine that NH, JL, and CX will be looking at the winner closely because they’re in need of high-capacity, short-haul aircraft.

I don’t think it will replace the 77W.

I don’t think it will replace the 77W.

SQ might have no choice, their (unwritten) policy is to replace aircraft after 15 years, those 77Ws will hit that limit soon.

I’m going to be really sad when that time comes.

lol can’t imagine a longer A350

I don’t think those aircraft are comparable.

It really depends on what the manufacturers are offering. The 777X could be pitched as a 777D variant a la the 747-400D variant sold to Japanese airlines in the 1990s. The A350 might be offered with the same capabilities as well. It would be interesting to see what was actually offered because it might differ wildly from what we are envisioning as a 777X and A350.

The solution for SQ in order for expansion is range. SQ could easily be a global airline because there is always demand to go to singapore it seems. SQ has gotten big with Airbus and has great relations with them. They are also the launch for the A350-900ULR. Maybe SQ could get a bit of a discount with them which would make them own the -2000.

If Boeing gives them a trade in where they return their 77W they could receive a bit of a discount with them. I know Boeing has had some relations with them so who knows. They do have a high chance of ordering Boeing as a few carriers such as Lufthansa, Emirates and Cathay Pacific have ordered the 777-10

I can see them ordering both as some airlines have done it. They are both good planes and would do SQ a lot of good

I really hope Boeing will offer a 777 with fixed wingtips if they require it.

Hmm, In my opinion, Singapore Airlines will prefer A350-2000 more than B777-10X, why? Cause SIA is known as an Airbus fanboy (They have an all Airbus fleet except B777s) Especially after rumours saying that SIA’s B78X orders will be given to Scoot instead operating for SIA. However, if Boeing’s plan is more promising, SIA may pick B777-10X More

However, with recent decrease of SIA’s pax. I don’t think they want to order an aircraft that capable for alot of pax. So I doubt, A350-2000 will be a better choice for SIA

SIA had a large fleet of 747s. Their fleet decisions used to the gold standard to what other airlines are compared to for some reason. SQ will take a long, hard look at both aircraft, and they’ll determine the best fit.

Once again, what A&B are offering might not be what we currently have in our minds for an A350 and 777X, so all bets are off since we don’t know what they’re offering to SQ.