The RAF’s QRA Typhoons have been very busy lately! Several excercises and emergencies for the guys up at Lossiemouth in the past few weeks, and now the Conningsby crew are getting some action!

One a more serious note, I’m glad it was a hoax. Still, must have been a pretty scary situation for those onboard! 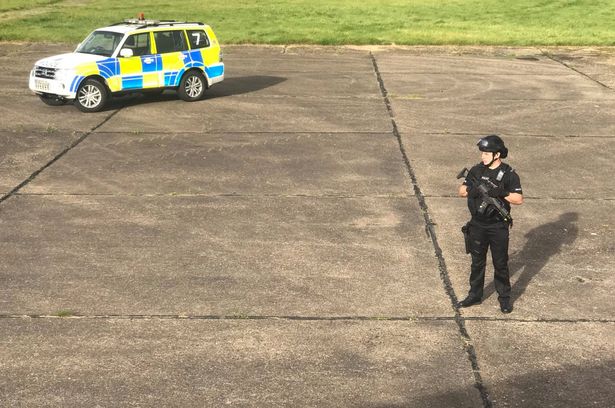 This morning, two Royal Air Force Eurofighter Typhoons were scrambled at twice the speed of sound to intercept Ryanair flight FR2145 over UK airspace, after a bomb threat was called in for the flig…

I’m just glad the threat was fake and all the passengers and crew remained safe.

I heard them fly over my house - what a noise! Good job it’s just a hoax. I’ll see what my Squadron CO has to say about it tomorrow haha

What were the chances of the plane taking off my home airport and the same flight i was in before the summer…
Glad to see no one was injured : )
Also currently watching it on my countries news

Heard about this, they didn’t tell the passengers whilst in-flight, it was coming from Lithuania.

Honestly tho how would intercepting the jet help? All it would do is agitate the perpetrator

I was thinking the same thing. All the jet’s pilot can do is watch it blow up if the bomb was on the plane. Its not as if the jets being there can make any major impact. I think it more frightened the passengers than calmed them down.

I think there main job is to make sure the surrounding Airspce is clear, they can’t do much really apart from watch, very unfortunate.

BEWARE your DM is about to get filled with questions XD

That must have been quite scary for the passengers and crew members. I’m just glad everyone was okay! c:

The jets get airborne and intercept and airliner for several reasons:

Primarily - to show a presence and ensure flight safety to the other airspace users. Should the Airliner go low level and fade from radar, turn off the Mode C (Accurate height reading) the the jets can report the height and we can ensure everyone else in the airspace is safe.

Secondly - to minimise casualties and, if required - engage the airliner. The idea is, an airplane crashing in a field doesn’t harm the same amount of people that would be caught underneath it in a city.

Yesterday’s event, a hoax - would most probably have been intercepted with the second reason in mind. It’s also an air policing role.

When an airliner loses radio Comms, the jets are airborne, intercept and communicate with the pilot via hand signals while multiple calls on guard are made to the airliner. Compliance turns and an eventual escort are the results of such an event.

The little dink turn and then a second back to the original heading are what we call a compliance turn.

How many knots is the speed of sound ?

667 knots is roughly the speed of sound, give or take a few decimal points.

It depends on pressure entirely

I heard them scramble out of conningsby, Been hearing them go out way more often recently

And then the Ryan Air plane nose lands and crashes.
.
.
Jk glad everyone is OK.

Thankfully everything was ok. Props to the pilots for sure