Revised Updated:MaxAvEvolution: The next step in GA Development.

MaxSez: This is just one of the no Pilot License required electric/quadriplegic air vehicles now in development. Both the Germans & Chinese have 2d generation full scale experimental in flight testing. (UTube) 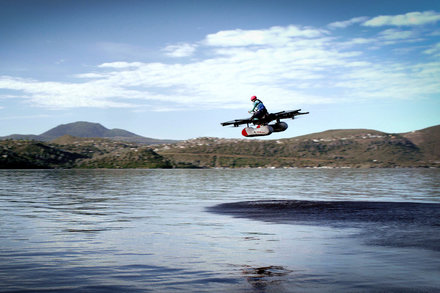 No Longer a Dream: Silicon Valley Takes On the Flying Car

This isn’t science fiction. A number of start-ups as well as big aerospace firms are trying to build personal aircraft you could fly around town.

It’s going to go from pilot error to coffee cup dumping on the electric control panel failure. I never liked the idea of no manned aircraft. At least with a pilot they could be trusted to do things a robot wouldn’t do.

I saw this recently! It’s looks awesome! The future, I present to you.

I will put my trust in a pilot over a machine any day.

But were those accidents caused by failure of the systems or failure of the pilots being adequately trained/experienced enough to deal with the failure?

A further reading into the accident reports will show that human input failure due to high workload and often poor or inadequate systems knowledge and training led to most of the accidents in which the plane, although ‘broken’, was flyable. Over reliance on automation.

When a ‘perfect’ human can develop a ‘perfect’ autopilot then I’ll trust it even if it would put me out of a job. Until then I’ll still have to go to work.

I read it and refuse to adjust my mind set. Thanks though :)

It’s a case of strengths and weaknesses-

The human brain is slower and error prone (when compared to AI), and multitasking can confuse/overwhelm it. It is, however, much more flexible and much better at responding when things go wrong.

A computer is fast, can multitask and does not make errors (when programmed correctly), but it is awful when things go wrong/stuff it dosen’t expect.

That’s why FBW aircraft were developed with advanced systems- under normal operations the pilot’s workload is greatly reduced, however when stuff goes wrong (as often happens in aviation) you’ve got humans there to sort it out.

I think much of the fear comes with that fact- there’s little to help when stuff goes wrong, without a human there- the difference to humans is that computers are getting more and more advanced, and while I can’t see in the next decade or so many pilots being replaced by machine, who knows where we’ll be in 50 years time.

No thanks, I’m happy in my glider.
No engine, just me and the aircraft. Perfectly fine.

I saw this ages ago - I think on ‘Apple news’