A Red Bull helicopter’s blades have struck an airport building after a misjudged landing in Austria. The helicopter had taken part in the opening of a new 1,300ft walkway connecting a Roman fortress and a castle in the mountainous town of Ruette, Tyrol. The Bell AH-1 Cobra hovered over the landing pad in Reutte-Hoefen Airport but moved sideways towards the building before touching down (video in article below). This damaged the helicopter’s blades and the side of the building, sending debris towards onlookers. The aircraft then caught fire soon after. The pilot and spectators were not injured in the incident. The pilot admitted the accident was a parking mistake, and Red Bull is yet to release a statement. 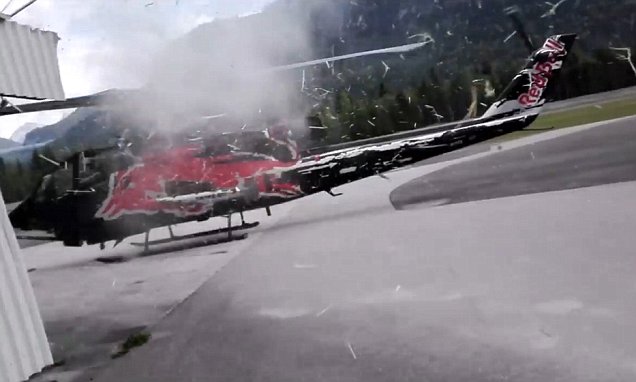 Terrifying footage from Reutte-Hoefen Airport in the Austrian state of Tyrol shows the rotor blades of the Bell AH-1 Cobra hitting the side of the terminal building, before it bursts into flames.

Ooh! Wow, looks like it caused a fair bit of damage

Yikes! That had to be an intense moment for everyone. Glad that there were no injuries. That could have been horrible. I hate to see that happen to such a cool looking heli!

It’s Red Bull. They did it on purpose because they’re hardcore! 😉 Good thing no one got hurt.