Why is infinite flight so windy? Almost everywhere i’ve flown there are extreme wind speeds of up to 180mph. It makes the flight feel unrealistic. Also, the way the planes react to these winds isn’t realistic either

Welcome to the community!

If I’m not wrong, Infinite Flight gets winds from real life, it has live weather. It’s not unrealistic, but just the fact that it’s windy in a lot of cases at an altitude as high as cruise.

Where are the areas that you’re experiencing these winds exactly?

Sometime the wind is very windy. Especially frequently traveled airways where a lot of jets passes through. The planes may not react realistically, idk I don’t know how they react, but the wind itself should be from real life.

the wind is from real life, IF uses real weather reports for its conditions… where exactly have you been flying ? :)

Yea, sometimes I fly and there’s 100+ winds. Like there’s this airway in the southern part of Canada where it’s very windy.

@Colton623 I assume you’re talking about the jet stream. During this part of the year, the jet stream is particularly strong blowing eastbound which is accurately reflected in Infinite Flight.
However when you’re talking about the plane reacting to the wind I agree with you. The way the aircraft bounces around seems quite exaggerated as opposed to how it is in real life.

Realistic weather can be explained as live weather updated through the internet and those conditions applied into Infinite Flight at every single airport through the United States and the airports around the world. Wind speeds of 180 mph do not seem plausible and not applicable to real life.

In the jet stream, you can see that the wind speeds are way off the charts at FL340, so 180+ knots is absolutely possible in the northern US and west Canadian coast. 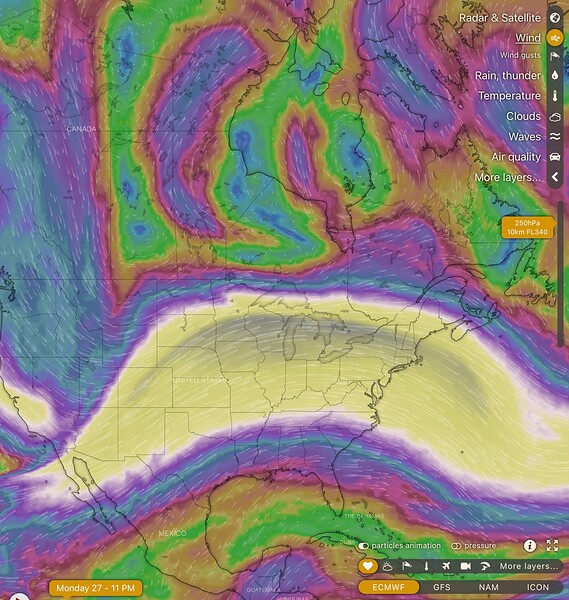 In infinite flight, the winds make a 737 bounce around like a C172.