Take a gander at this story/video and see what you think. I see both sides of the response that this stunt has generated, although overall I think it is hilarious! 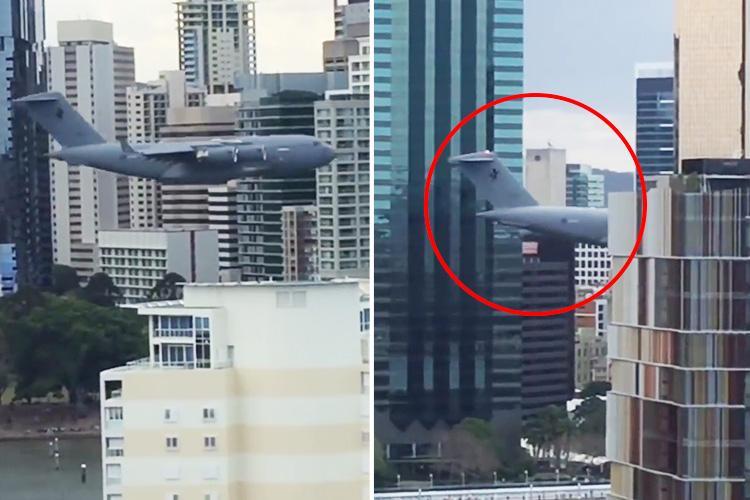 THIS is the terrifying moment a Royal Australian Air Force jet flew shockingly close to high-rise buildings in Brisbane – sparking comparisons with 9/11. The eye-popping stunt saw the military plan…

I personally don’t see this as funny, cause of the shadow of 9/11 still over us. I can see why people would be scared.

This could’ve gone wrong in so many ways. Why do it in the middle of the city?

“Alright, time to add the power so we can climb outta here, don’t wanna hit that huge building in front of us…”
“Uh Jeff? That’s the trim.”
“Ah.”

This no laughingstock to make fun of. This is really worrying. Hope the Austrialian military sort this situation out.

“, although overall I think this is hiliarious”
Next time, review what you say before posting it.

I agree with your statement completely

They have all right to be scared as they probably didn’t know what was happening but at the same time I’m almost 100% sure that pilot was skilled enough. I live in Brisbane and I didn’t even know this happened 😂

These are trained professionals, I think they are fine. Take a look at combat flight, close proximity flying to buildings and the earth. Also my opinion to think it’s funny😜 I’m not asking you to agree, just stating my opinion, and yes, I thought about it before I said it.

He likely was, but still, nobody knows if somebody hijacked the aircraft. I personally would be extremely worried

The Boeing C-17 Globemaster jet was taking part in the iconic Riverfire festival, an annual event held in September to celebrate the end of Queensland’s three-week arts and cultural festival.

They were doing it for a reason and was not like it was a random event.

Ask anyone who works in downtown Chicago what it is like when the Air and Water show is practicing.

Does that give them a right to fly 300 feet agl between buildings?
( I mean, it kinda does, but they could’ve planned that out better)

@WestJet737767, I guess that would depend on your training. Are you a combat trained military pilot?

In my personal opinion, this could have been done maybe a few yards out of downtown, not right in the middle of it.

I love this thread… they were doing to for a reason for a display. It wasn’t even that close. For the people that say, “this was close” do some research on airshows and approaches.

Oh no I did! That’s my opinion

Fair enough, and I’m not trying to say that anyone here is wrong, honestly, they could have at least said hey everybody, we are gonna fly a c130 a few feet away from your buildings, so be prepared
That’s where the issue comes in

Question: Did RAAF tell the media/the general public about this before it happened?

If so, then I think the media obviously didn’t do a great job. Then again…

Exactly my point, and if the media screwed up, then I officially hate the sun.