Just wanted to report this incident -

This flight from Abu Dhabi to Rahim Yar Khan landed at Lahore (approximately 624.5 km away from destination) due to poor visibility and asked the passengers to take a bus to the destination. The passengers refused to get off the plane, following which, the staffers switched off the air conditioning system.

Wouldn’t it just have been better to wait till it clears up then reach final destination? Unless of course you are in the vicinity of the destination… which doesn’t seem to be the case.

That’s a bit harsh. The passengers had paid their money for this and a 600k journey in car/bus is quite far

I mean sure I would understand if you were like let’s say 10 minutes drive from the original destination then I understand why they would do that (to save money), but you really shouldn’t just expect to have to make an emergency landing and then say, “take a bus the rest of the way”. It is especially wrong that they shut off the Aircrafts A/C basically suffocating them, which could then lead to a death, which would then lead to a big investigation which could then put PIA in jeopardy of going bankrupt due to passengers not wanting to fly with an airline that, 1: Makes some of their passengers Stand the whole flight and 2: Refuses to fly to the original destination and force their passengers to ride a bus there. Not a smart decision on PIA’s side.

Can’t they use the ILS for a low vis approach?

632km in a Bus without A/C which they were originally supposed to go to in a A321? Well thats a huge downgrade. And suffocating minors by turning off the A/C in the plane when they refused to get out? Wow.

Can’t they use the ILS for a low vis approach?

IRL when it’s below a certain degree even where there is ILS in the airport they still don’t land for safety reasons. However in this case I don’t think that airport had a functioning ILS.

Maybe, just maybe, the airticle is a bit biased. After all, it is an Indian newspaper reporting on a Pakistani incident. They’re gonna be harsh. Just pointing that out.

Yeah, I pretty much agree with everyone here. Very stupid from PIA’s part. But yeah, not much we can do about it.

In that case would there be any delays or flights cancelled?

I got so confused when I read the title. For whatever dumb reason, I though they landed at Chicago Midway 🤦🏼‍♂️

The staff shouldn’t have turned off the AC. Their customers paid for the full trip, and that is what they should get.

This is the kind of impression Pakistan has on the World. Such a shame they had to do this.

Passengers pay for their ticket, plane makes unscheduled landing due to fog at destination then wants to accommodate pax on a 10 hour bus ride. No please, at least wait for the fog to dissipate which would take a shorter time.

Shame on you PIA!

That’s really rude towards passengers.
Delayed flight is very much acceptable compared to the downgrade from a Airbus to RoadBus

Nothing This harsh was done by the Staff
This is false news shared by Indian Newspaper website
The flight was diverted
The planes AC was not turned off
There are no reports of passengers being told to take a bus
Pakistan’s TV and online media would’ve given this news but there was no such Bus Incident
How did TOI get this news before Pakistani Media??
This this is false news, a try to ruin the Country’s Falg carrier

How did TOI get this news before Pakistani Media??

It’s on Geo TV which is a Pakistani television channel. It isn’t confirmed though if they took them by the bus in the end. I am pretty sure PIA did some alternate airplane arrangements or else it would have turned into something bigger. 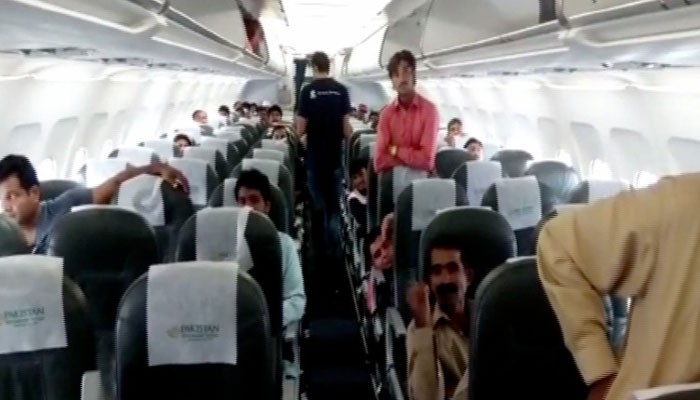 PIA passengers told to travel to destination by bus

It is especially wrong that they shut off the Aircrafts A/C basically suffocating them, which could then lead to a death,

And suffocating minors by turning off the A/C

Ok you guys will have to explain this one to me. Since when did air conditioning start providing oxygen? I’m thinking never.

Shutting of the A/C in a plane in hot weather is like turning the plane into a toaster.

Lahore’s been dealing with smog for about 2 days now. At as of right from with I have heard on the news there dealing with fog. Here’s whats on IF right now:

You can’t even see your whole plane.