Many people do inter regional flights by just setting the heading, pause and leave. This should not be allowed. If I remember correctly you get 10XP for every minute flying. This is one of he reasons why XP means nothing because you can leave the game on and rack up XP while you’re not even there. This is a good example below 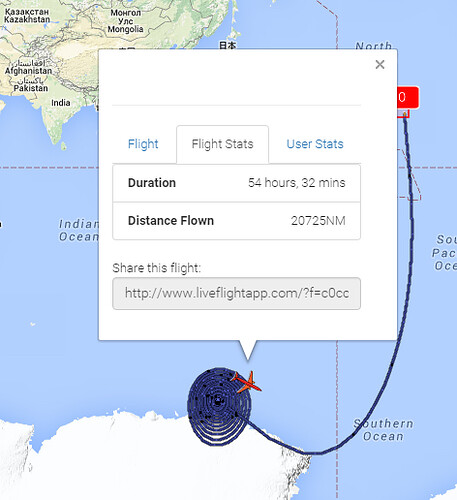 If you noticed I removed the name of this user because I do not want to call anyone out. This behavior is not fair to pilots who actually do a lot of touch and goes to get XP. I have tried to search, but couldn’t find or remember anything that is similar to this, if there is please correct me.
I propose there be a time limit on how long you can have the pause menu on in live. This will stop people from setting heading and leaving. For those of you who do not know. If you set throttle to 100% and click pause your throttle will not cut back if you leave the region. Another solution would be to bypass this and allow the throttle to cut back even if you’re paused, but I feel that would be a harder fix. If you are only allowed to pause for a certain amount of time, than the person will have to come back and keep resetting it, which will make doing these flights much more annoying to do.
What do you guys think?

I’d go with that, but then I’m not a dev so not sure how fiddly that would be to sort out. It does go to show that XP quite often means nothing, but then I think we all know that if you spend any time on the playground server.

Yea that would be the ideal solution, but I would think that’s harder.

but then you could have the problem of if you where making a cup of tea, bathroom break or similar then you could end up crashing. However having a time setting of say min 5 mins would allow for this, but still mean those trying a “global flight” would get caught out.

As an example I often listen to the internet radio when on IF and if I go to change channel or similar this goes to the ‘Pause’ page!

Even 15 minutes would be fine

Stick it on Autopilot in that case, that’s what I generally do. The only time I use Pause is if I want to change the settings, even then I’ll stick on AP first.

fine for cup of tea making…but when changing the radio or replying to a message it goes to pause menu, even if on AP

Are you planning on changing the radio for 15 minutes? I think 15 minutes is a good time.

Ah ok, I’m using an older iPad on iOS 8 and if I leave the app at all to do something else it just kills the session entirely!

I do have one question. What if someone like myself is not interested in XP at all. I am very bored with the short flights and would much enjoy being able to fly from Florida to North Carolina. I see they did proceed with the throttle cutback, but as someone who has paid for this as many others, and is not interested in the XP gained from the long distance flights, what can I do to get this changed? I’m new to the forums and don’t know where to go exactly to ask these questions. I would make donations to even have this changed if that is what it took. I really like this sim.

There is nothing you can do to bypass the throttle cutback, just wait for global flight:)

This doesn’t work for me- not like I’ve tried ;)

I seem to lose altitude and crash whatever happens, is this a apple thing?

This should only come into effect once you are 35 knots or higher.

And, I fully support this Carson. This is an example of a noob who wants to reach Advanced and disgrace it 😒😒😒

This idea could be avolved into something like ATC removal. How if an ATC doesn’t communicate with aircraft for so and so minutes they are removed from the operation.

We already have something where if u don’t answer 5 messages from pilots, you get disconnected