On this day in aviation history the right stuff began 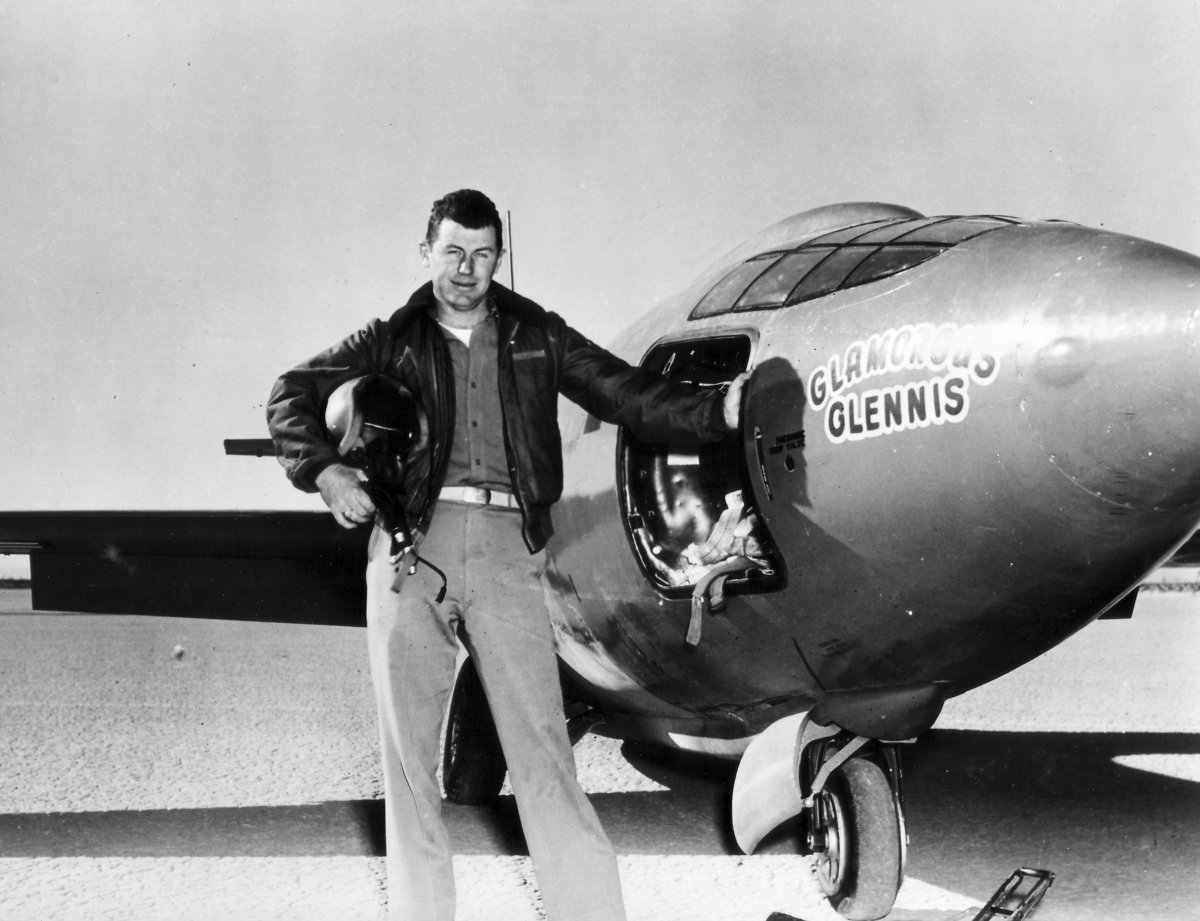 The journey to that flight started in late 1943, a conference hosted by the National Advisory Committee for Aeronautics, which was NASA’s predecessor.

Attendees were looking for a way to give aerospace companies better information about high-speed flight in order to improve aircraft design, and it was concluded that a full-scale pilot with a pilot at the controls would yield better information than wind tunnel experiments.

The project picked up speed in March 1945, and testing and tinkering continued until late 1947, when the X-1 — nicknamed “Glamorous Glennis” after Yeager’s wife — was ready to fly into the “ugh-known,” as Yeager and others called it.

But just days before his record-breaking flight, Yeager broke two ribs in what he described as a “disagreement” with a horse.The accident earned Yeager some teasing from the project team — which gave him a raw carrot, a pair of glasses, and a piece of rope as a joke on the morning of the test — but didn’t delay the schedule.

The injury hindered him, however, and he had to use a piece of broomstick handle to help close the X-1’s hatch. The night before the flight, Yeager slept poorly because of his ribs, but he resolved to only scrap the test if he couldn’t manage the contortions required to get into the X-1 from the B-29 that would lift it into the sky.

“If I could get into the pilot’s seat, I knew I could fly,” Yeager said in a November 1987 essay in Popular Mechanics recounting the flight.

“ Everything was set inside X-1 as [B-29 pilot Maj. Bob] Cardenas started the countdown,” Yeager wrote. Bell project engineer Richard Frost “assumed his position and the mighty crack from the cable release hurled the X-1 into the abyss.”

Yeager fired the test aircraft’s engines, and, “The X-1 began racing toward the heavens, leaving the B-29 and the P-80 far behind. I then ignited [engine] chambers No. 2 and No. 4, and under a full 6000 pounds of thrust, the little rocket plane accelerated instantly, leaving a contrail of fire and exhaust.”

The X-1 raced toward the sound barrier as Yeager tested the plane’s stabilizer. “The rudder and elevator lost their grip on the thinning air, but the stabilizer still proved effective, even as speed increased to .95 Mach,” he wrote. “At 35,000 ft., I shut down two of the chambers and continued to climb on the remaining two. We were really hauling!”

The flight report Yeager filed afterward described a professional calm during the acceleration to 662 mph, the speed of sound at that altitude.

“The airplane was allowed to continue to accelerate until an indication of .965 on the cockpit Machmeter was obtained,” Yeager’s report stated. “At this indication, the meter momentarily stopped and then jumped up to 1.06, and the hesitation was assumed to be caused by the effect of shock waves on the static source.”

“I had flown at supersonic speeds for 18 seconds,” Yeager wrote 40 years after the flight. “There was no buffet, no jolt, no shock. Above all, no brick wall to smash into. I was alive.”

Yeager’s flight took place on October 14, 1947, but a December 21 New York Times story, citing Aviation Week, said that, “Persistent rumors that a new plane traveled faster than sound have never been confirmed by the Defense Department.”

Aviation Week said at the time that the “biggest surprise” of the tests the ease with which they were conducted.

“None of the pilots, it is said, experienced any undue difficulties while traveling faster than sound. Generally anticipated troubles such as severe problems of stability, control and structural load failed to materialize,” The Times noted.

Yeager’s achievement was not officially acknowledged until June 1948. He kept working as a test pilot — six years later he flew 1,650 mph aboard an X-1A rocket plane — and retired from the Air Force in 1975 as a brigadier general.

I actually was about to write a topic for that as well, when I discovered the Rotodyne. That would’ve been interesting to see, two posts about the same event many many years ago. 😈

Aviation never fails to surprise you with fascinating trivia and flabbergasting stories from the past. This is definitely one of them. Thank you for sharing it with us tonight!

That’s funny! You do the rotor wing thing and I do the fix thing!