New flights will give Norwegian a total of 52 non-stop routes from the U.S. to Europe.

These new routes will include:

These new routes with one way transatlantic fares of under $250; are said to offer American travelers even more affordable fares and create American Jobs.

Norwegian Air Shuttle has said, that they plan on having 52 routes from Europe to the USA by the end of 2017!

Norwegian has said in a statement that they have intentions on flights to:

Many US Carriers are concerned with the low fares; How Norwegian may take them out of business with the Long Haul Flights across the Atlantic. (“U.S. carriers and unions had hoped for a more hostile environment from President Donald Trump’s administration toward foreign competition on routes, but the administration has hinted toward an interest in foreign airlines’ use of American products and workers.”)

I am extremely happy that Norwegian is operating cheap long haul flights with quality planes and a new designed interior (and that they are Boeing!) I think that with Norwegian flying low cost, more airlines will drop there prices to compete with them. Which could open up a new market of low cost flights in the USA.

With that… Tell me what you think of their new routes and how successful you think these flights will be, aswell as your thoughts on low cost carriers and Norwegian Air Shuttle in general! (Comment #1 to respond to this)

Interesting choice from the airline. Personally would love some more international airlines in the Midwest us. Also, thanks for the very well structured and detailed post!

I think this is wonderful news. It’s great to see Norwegian spreading their wings (no pun intended) to other European destinations along with US ones.

Norwegian has grown substantially since their inception, specifically their long haul operations, and has definitely become one of my favorite foreign low cost airlines. I’ve heard many great things about them – the greatest being their very low cost ticket prices and highly rated service. I cannot wait to get on a Norwegian flight someday and I’m very excited to see their many, many expansions in the future.

Wow Norwegian is going in for the kill of Alitalia.

They defently can… But would they. (Regional Routes + America and Asia)

This is amazing Norwegian Air Shuttle will be making a stop in my home town of Newark, NJ. I’m so excited.

I never knew Norwegian Air Shuttle was a low cost carrier. I’ve never seen any low cost carriers flying long haul ever in my life. I think Norwegian is going to be successful with this and hopefully they’ll attract a lot of people to fly with them. When will Norwegian start flights to Vietnam?

Another Norwegian expansion plan is to base at AMS and fly long haul to the US. Also @CannedAviation Scoot, AirAsia X have been flying low cost long haul for quite a while now. LEVEL is another airline starting up.

You never know if they will. If the Singapore route works out good, then we may see Norwegian continue the push in Asia and the Countries on the Pacific.

But as of now; there has been no statement regarding a further expansion towards the continent of Asia

I would love to see Norwegian fly from AMS…

If they did open up AMS as a huge hub… Do you think it would affect KLM? @Aircraft19

Well it depends which routes they would operate on.

Currently, Norwegian Air Shuttle flies to AMS from HEL, CPH, ARN and OSL. These would most likely be competitive routes, as currently, the low cost short haul European market is booming, as passengers on shorter flights may prefer lower costs over decreased service.

If they take a hub at AMS, and fly short haul services around Europe, I can imagine them taking over a large percentage of the market share, and causing a few problems for KLM. After all, KLM do offer very good service, but at some rather high prices. On certain routes, I can see KLM pulling out, such as their seasonal routes to Spanish holiday destinations which attract lots of people lower cost holidays. Norwegian go into these markets because they know they can attract a lot of passengers and gain a lot of revenue.

On longer haul flights, Norwegian would definitely receive a decent market share but I still think KLM would be take the majority. I know Norwegian have been very successful from LGW, CDG, OSL and are likely to be at FCO, but KLM charge more on longer haul routes and this is were they earn most of their revenue, from premium services.

Although Norwegian’s premium seating is rather affordable, and offers a good service, professional business people are more likely to fly with a legacy/flag carrier. So with longer haul flights, I don’t think KLM will suffer too badly

Norwegian only fly to a few destinations in Asia, Singapore and Bangkok to name a few. I don’t see them flying anymore routes to Asia for now, and definitely not out of AMS. If they do, I presume it would be from LGW. I’m hoping they open a route to HKG in the near future! 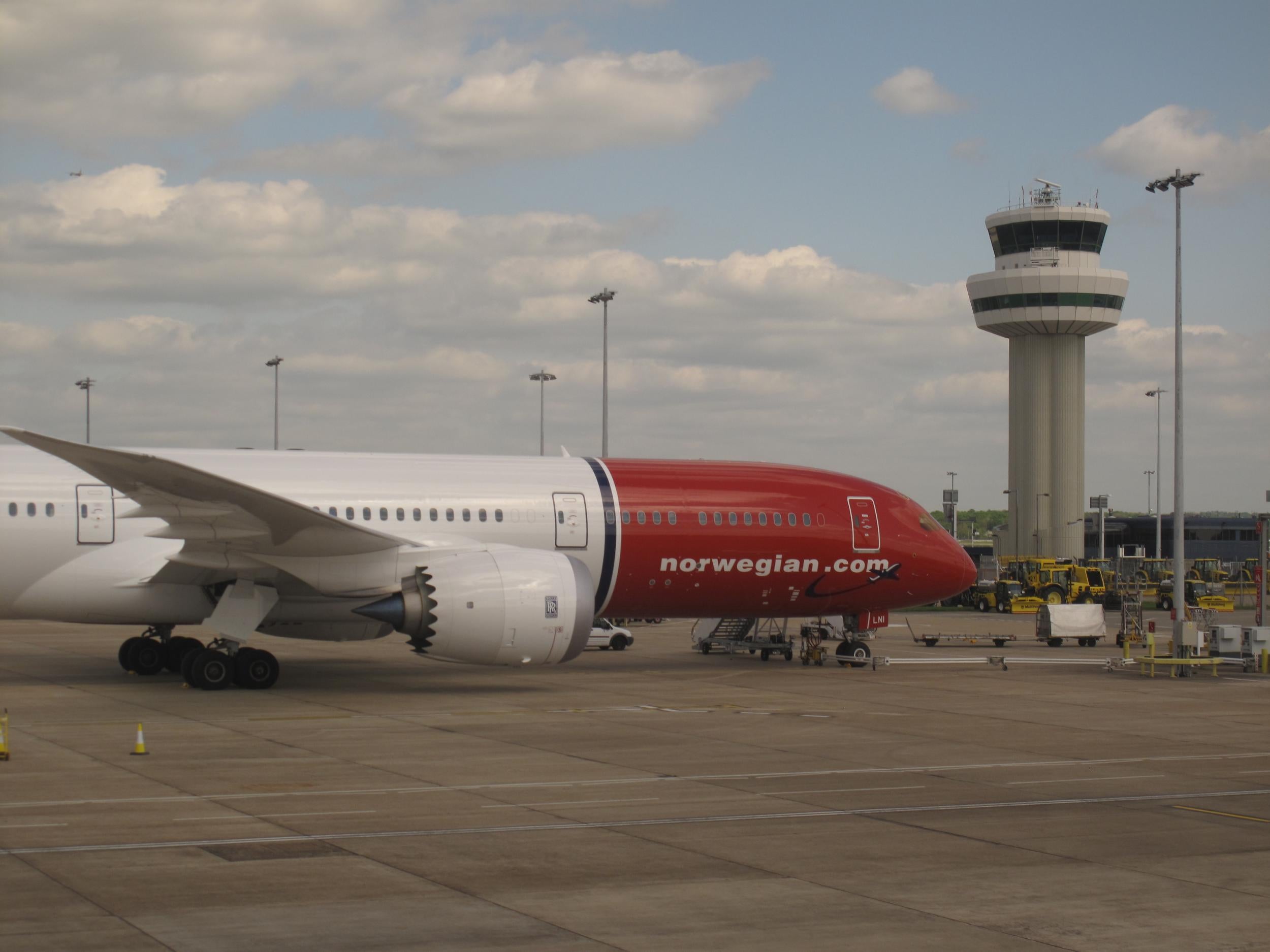 Valentine’s Day 2018 will see the maiden flight of the longest ever non-stop route from Gatwick: a new link to Buenos Aires. Norwegian, which has a busy long-haul network from the Sussex airport to the US, is now launching the first long-haul,...

A new route has been announced 2 days ago by the European Low Cost Carrier; Norwegian Air Shuttle / Norwegian Long Haul

This new route with fares of £300; is said to compete with British Airways and other European Carrier to connect South America to Europe with low fares.

Norwegian has said that they plan on setting up a branch-off airline called Norwegian Argentina.

I am extremely happy that Norwegian is operating cheap long haul flights to South America. I think that with Norwegian flying low cost, more airlines will drop there prices to compete with them. Which could open up a new market of low cost flights in the world. With Norwegian operating short haul in South America, Norwegian may be able to finally operate to SXM (Cant currently due to some type of law)

With that… Tell me what you think of their new route and how successful you think these flights will be, aswell as your thoughts on low cost carriers and Norwegian Air Shuttle in general!

Are You Excited For Norwegian Argentina!!??!?! (Comment #2 to respond to this)

Side note: Buenos Aires is EZE not EXE.

Edit: Another side note: The first flight is scheduled as a 787-9.

Norwegian took delivery of its first two Boeing 737 Max 8s today, with the aircraft due to enter service on transatlantic flights in July.

Today Norwegian took delivery of their first two Boeing 737-8 MAX’s… This makes them the 2nd company in the globe to receive the B38M and these 2 will be the 3rd and 4th in the world!

These planes will start service to the East Coast of the United States in Mid - July.

The 737 MAX incorporates the latest quiet engine technology to reduce the operational noise of the airplane by 40% and can service longer distances with using less fuel. The smallness of them also make them able to land at smaller airports!

I am absolutely thrilled that Norwegian has finally taken delivery of their B38M’s as they have been delayed by Boeing by about a month. With these new planes, they can service more places and expand the Norwegian Brand (and maybe finally service KISP and TNCM)

Photo by me
Edit: Thanks to @DeerCrusher for the info about the Max arriving Oslo 😊

On June 29, 2017, Norwegian and Boeing celebrated the delivery of two Boeing 737 MAX 8 aircraft. The airline is the first European carrier to receive this new aircraft type. Norwegian will use the …

And look where it ended up :)

Batik Indonesia’s 38M just arrived in Jakarta at around 5-6am this morning. It’s nice to see more airlines using these MAXs 😊

It was supposed to be delivered to OD as the third plane, but somehow Lion changes the order to ID instead. Thus the registration changed to PK-LQJ

I can’t wait to make these flights in global!

I was there and saw them land earlier today! The winglets look beautiful <3

Nice article! Can I call myself a published photographer now? 😁
She is a beauty