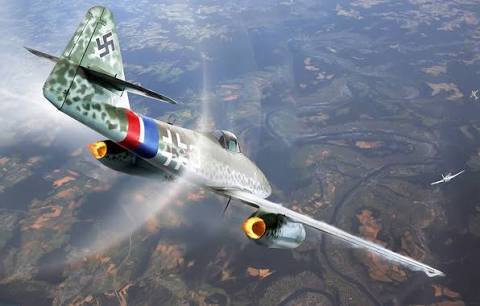 Yes, the first effective jet fighter to become operational. 4x30mm MK 108 cannons, two Jumo 004B engines, capable of carrying two 500kg or 1000kg bombs under the nose, 24 R4M air-air missiles under two hardpoints under the wings, could be equipped with two RATOs (Rocket Assisted Take Off) under the fuselage.
Its main weakness was the low speed at which its engines reacted to the throttle, being very vulnerable when landing/taking off. Flameouts usually ocurred too.

Just a small suggestion, please change the image to one of a real aircraft, by 1944/45, the Luftwaffe had stopped using yellow on the nose of their aircraft, and the band on the tail is an invention from the producers of “Red Tails”. Also, JG 3 never used the Me 262. Artistic license again.

Some of the planes requested today I’ve never heard of before and look quite unusual… Where do you find these?