A KLM Boeing 777-200, registration PH-BQI performing flight KL-31 from Amsterdam (Netherlands) to Toronto,ON (Canada), had been instructed to line up runway 24 and wait by the outgoing tower controller.

Immediately after this instruction the incoming controller cleared KL-31 for takeoff, the crew of KL-1385 immediately reported they were still departing conflicting with KL-31’s jet blast, the controller immediately cancelled takeoff clearance for KL-31 and instructed them to hold position, the aircraft had not yet moved.

KL-31 departed about 2 minutes later, both aircraft reached their destinations without further incidents.

Incident Airbus A3ST at Hamburg on Jun 20th 2017, could not retract gear

Ooh no. One of my favourite planes

Thanks max! These topics are always useful :)

Better stuck down than stuck up

Sunday Jun 25th 2017
Incident AirAsia X A333 near Learmonth on Jun 25th 2017, engine shut down in flight after severe vibrations

I just saw a short clip from inside the cabin from this incident. It literally shakes like a washing machine standing on uneven ground.

What can cause such vibrations? Seems really odd.

The Airbus A333 with the flap issue circled over my town for 3 and a half hours burning off fuel before returning to KCLT. 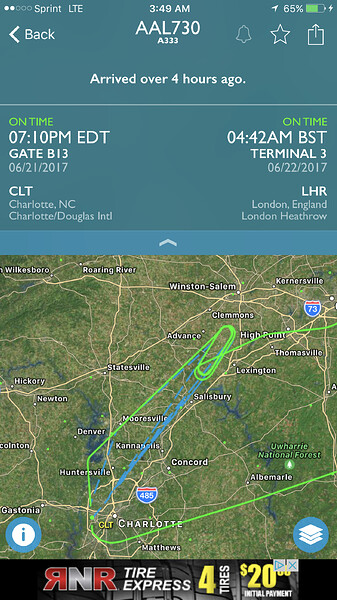 @schyllberg… MaxAsks:. AirAsia 333 Incident : If available please publish here the video clip you noted in your comment. Thanks

MaxSez: Wow! Experience a similar incident years ago. Sheared Bolt on an engine mount pylon on a C-123 (Provider) out of a rough dirt strip in SEA. I had to wash up after recovery!

Well, that is not good at all…

A China Eastern Airbus A330-200, registration B-5926 performing flight MU-774 (Jun 17th) from Paris Charles de Gaulle (France) to Kunming (China), was enroute at FL390 about 260nm northeast of Tyumen (Russia) the aircraft encountered severe turbulence including two large jolts causing the aircraft to experience multiple rapid descends and climbs (in excess of 5000 fpm) reaching a minimum of FL349 as well as injuries to 26 people on board. The aircraft continued to Kunming for a safe landing about 5:45 hours later. Four passengers were taken to hospital with serious injuries (fractures and head injuries), 22 passeners with minor injuries.

Passengers reported that many passengers were not buckled in about 6 hours prior to landing in Kunming when turbulence lasting for about 10 minutes set in and resulted in two very large jolts having everyone not being buckled in hitting the cabin ceiling and being thrown back onto the seats. Between the large jolts there were a number of other lesser jolts.

The airline reported without identifying when and where the tubulence took place, that the fasten seat belt signs were illuminated however not everyone complied with the instruction. A number of passengers needed to be taken to hospitals.

Thanks for all of that information!

Incident Delta B764 near Boston on Jun 22nd 2017, problem with minimum/maximum speed indications

I remember seeing this on FR24 a few nights ago. Good to finally know what the issue was.

Incident: Delta B764 near Boston on Jun 22nd 2017, problem with minimum/maximum speed indications

A Delta Airlines Boeing 767-400, registration N834MH performing flight DL-174 from Atlanta,GA (USA) to Milan Malpensa (Italy), was enroute at FL330 about 190nm southwest of Boston,MA, almost over New York City, when the crew descended the aircraft to FL250 and then FL230 due to problems with the maximum and minimum operating speed indications. The crew decided to divert to Boston, advised ATC it would be a normal landing and landed the aircraft safely on Boston’s runway 33L about 45 minutes after leaving FL330.

The aircraft remained on the ground for about 4:40 hours, then continued the journey and reached Milan with a delay of 5 hours.

A passenger reported the captain announced they had faulty minimum/maximum speed indicators. After landing the captain indicated that the thrust reversers had not stowed after landing, maintenance needed to fix the problem.

I didn’t know that AirAsia X has massaging seats, now I know who I should fly with to a destination in Asia.

On serious tone, the vibration look really bad. Maybe a component in the engine is out of alignment causing imbalance.

Yeah, i found some similar explanations in the topic about just this incident:

Much like my QF94 report not so long ago, An Airbus A330 operated by Air Asia X had a engine failure mid flight. A successful emergency landing was made back at Perth Intl. Passengers say that the plane was rocking violently”. It is belived that one of the fan discs came off. More info here: