Man Runs after Plane on Apron in Dublin

Just this morning, an incident occured at Dublin’s International Airport.

After a man and a woman were delayed for a Ryanair flight, the agitated man banged on the window repeatedly asking the plane to wait, after which he eventually broke through a door, entered the apron and chased the Amsterdam-bound 737 while it was taxiing. The man was pinned to the ground by police, then detained and is now in custody of the local police.

Personal opinion: As funny as this is, one must be spectacularly stupid to think that he’d manage to enter the airplane after it had begun taxi. As important as getting to Amsterdam might’ve been for him, it was completely unnecessary. Not to mention of course the danger involved.

Here’s an article by the BBC: 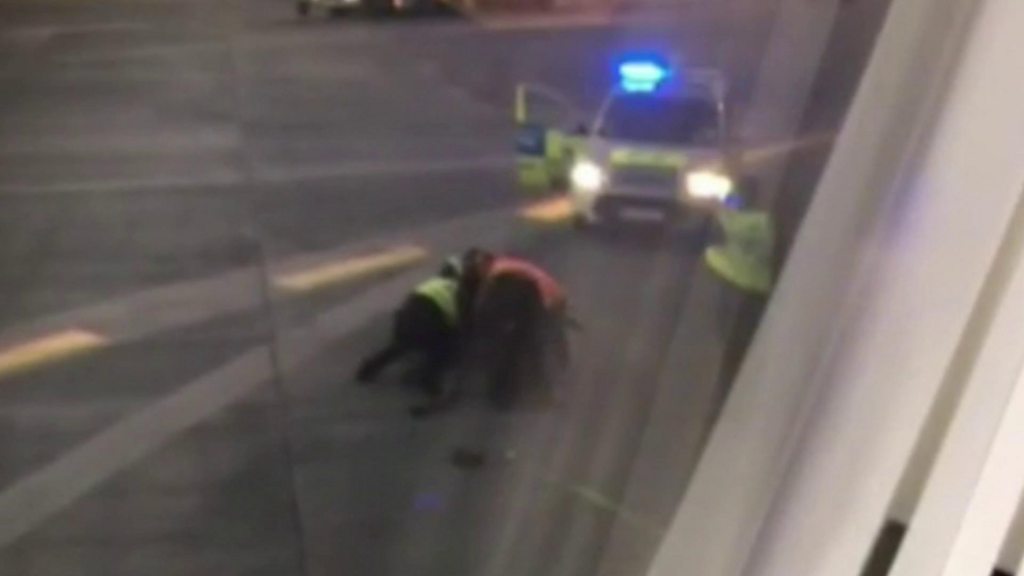 Patrick Kehoe was pinned to the ground by police at Dublin Airport after chasing a Ryanair jet.

“Ladies and gentlemen, we are going to be delayed here for a moment as we are currently being chased by someone on the taxiway”

In all seriousness I don’t know what he was thinking.This year has been a strange one for aviation for things like this

Maybe no one on babe’s home lol.

Now I’m imagining me on a plane hearing jacksepticeye running and screaming after me.

But seriously, be there earlier if you need to get there that bad.

Even just this week has been strange! The guy who thought the door out of the plane was the bathroom, the guy who tried to get into the cockpit to charge his phone, and now this!

It’s becoming an increasingly common for these things to happen. Thankfully no1 was seriously hurt.

I can’t imagine what the guy was thinking! He probably expected the plane to stop for him, open it’s doors, but NO! He probably would also get blown away for the jet blast. These crazy incidents really should stop.

I am beginning to wonder about when will the last time I hear about some person just running on an airport, or trying to steal a plane.

The fact that he actually broke the doors to get through then ran after the plane, expecting to be let on after such a breach and commotion makes him even more delusional.

So there is a man who mistakenly thought the exit door was the restroom. Then a passenger who thought he can charge his phone in the cockpit. Then a man running after a plane on the tarmac. What’s next, a man who wants a tour of where the checked luggage goes by sneaking on the conveyor belt?

It’ll probably be someone wanting a free trip while grabbing onto the wing during takeoff and the entire flight.

Then he would get hypoxia, pass out, lose grip, fall from 30000+ feet, and then die if he were to do that. And that’s if he even managed to hold on during take off and climb, or catch the plane.

This is saddening. We have gone from the great minds of Socrates, The Wright Brothers, Da Vinci, Kepler, Euler, and many others to… well… this. One of these days, anyone who can do simple algebra is going to be held up as a genius 🙄

This is just plane stupid and very dangerous what this. Man did
And don’t try it at home😉

The number of people getting on tarmacs seems to have been going up lately, I hope no one will get seriously hurt by doing this and choose to be smart.

he eventually broke through a door

As in one of the metal, bullet-proof gate security doors?

From what I saw, he damaged a door lock. I’m not sure on that note though