I love this new update. The 18.6 update is by far my favorite update in the year 2018. Probably my third favorite update of Infinite Flight history (behind the introduction of Live and Global). Since the update, I’ve enjoyed flying the B737 more and more. This plane is much more fun and realistic to fly and I can’t stop flying them, especially for Southwest Virtual.

I also couldn’t find any duplicates or any reports of this little bug.

Now on to the problem 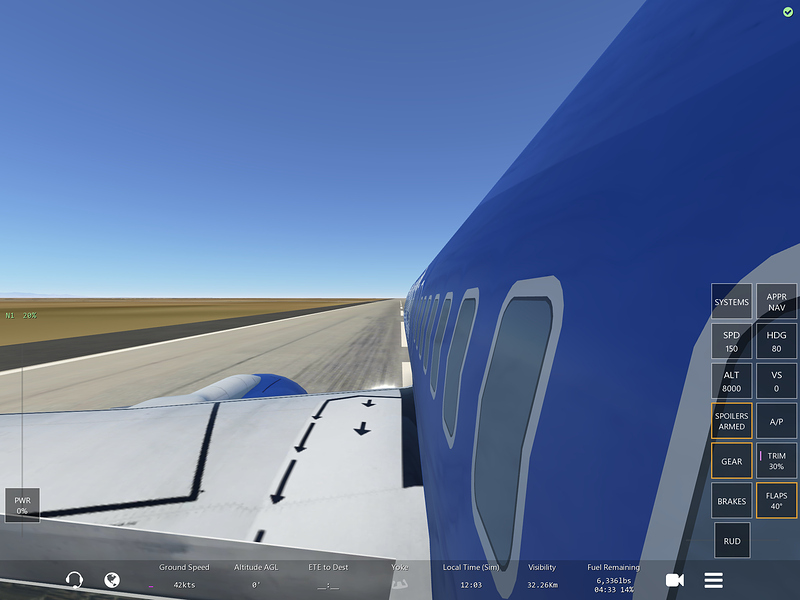 As you can see from this picture, I am on the wing view and facing forward. You can also notice that I am on the runway. This was when I was landing and released reverse thrust. I have noticed that after throttling up, my camera over the wing glitched from facing to the wing to facing the front of the plane when I didn’t even lay my hand on the screen to move the camera, just the throttle to control the engine power.

NOW, you could say I could just use my finger to turn the camera back, but whenever I do try to do so, the camera barely budges. So basically, I’m stuck in that position until after I become airborne or I have slowed down to around 40kts.

How did I find this?

I always like to take a quick peek at the wing while on takeoff roll or after landing to look at the spoilers and downed flaps. This bug is preventing me from doing so.

Have you replicated it?

Yes, every time I fly a plane from the B737 family, it happens. I don’t know about other planes because I’ve been flying nothing but the B737 since the update.

To replicate it on takeoff:

To replicate it on landing:

I think this is a very annoying bug as I like to take a quick glimpse of the wing on takeoff and on landing. I don’t know. I like to observe the flaps and spoilers (on landings) XD

I don’t know if you guys can also replicate it or if this is just a problem on my end. I also don’t think restarting or deleting the app and then reinstalling it would do anything either.

If there is something I’m missing,

Please tell me on how to fix this issue.

I have no idea how to solve this, have you tried the usual restart and reinstall stuff?

But on another note, this is what a #support topic should look like! Good job!

Whoops, nevermind, that was landing XD

If you look on the autopilot, I have “leftovers” from the flight.

I takeoff with my desire cruise altitude on autopilot

Thanks for pointing that out

when I was landing and released reverse thrust. I

thanks for pointing that out

This happened on multiple flights and I always restart every night.

You know, allow me iPad to actually rest on sleeping

I just tried on the 737-800 without luck. Is it on all the 737’s for you?
Do you have to be on the taxiway and then enter the runway for this to be reproducable?

Yes, I was on the runway and throttled up to being my takeoff roll or had reverse thrust activated after landing

This was all on Live so yes, I did have to taxi to the runway but the problem didn’t occur until I began my takeoff roll was accelerating down the runway for a bit

This happens to me too. I didn’t know if it was a glitch or just a weird update. I guess it’s a glitch.

I just didn’t a take off (manual), and a landing (APPR) in the wing view, with no issues on the -900, do you not have the issue on that aircraft?

Do you have any 3rd party apps running at the same time?
Can you check if the Connect API is activated for you?

I only have IF Assistant running in the background

Haven’t used IF PAX for a while now

Can you try and see if you can repro it without IF-A running?

I figured it out, it’s the “shakey” cam in IF Assistant, I just did it with that on and had the issue, and with that off (only till it happened on takeoff, didn’t do landing yet) and having “shakey cam” disabled solved it…

IF-A has been known to have shaky cam issues with the 737.

Glitch or Bug? After the Update Support

Hey guys, all I’m doing is calling the API, so this seems to be an API bug in IF. You can turn off the shaky cam until it gets fixed, I guess…

Well, good to know that it’s being worked on!