I have spent some time going through each of the aircraft that we have available to us and brought all of the fuel burns for all of the aircraft to one location. With these fuel burns is provided an Estimated Flying Time or EFT. This is the amount of time you could expect flying. The fuel burn and the EFT is provided in app under the weight and balance page. All I did was transfer what was given to an excel spreadsheet. As for the cruising speeds, I tested these speeds over a period of time to ensure the speed was in the “sweet spot”. These numbers may not be accurate during your flight as the fuel burn and EFT will either increase or decrease; again these are estimates. Use these numbers as a rough estimate when choosing an aircraft for your flight and when choosing a speed to cruise at.

Please note that the fuel burn will vary based on the multiple factors such as winds and aircraft weight. (See notes on last picture)

Blank spaces, “–”, or the “∞” represent that the information was incomputable or was not completed by me. If you have any aircraft that you think need to be revised, let me know and I’ll look into making the appropriate changes on the spreadsheet.

Hope this helps in pre-planning purposes for your global adventures!

(I cannot change fuel burn for aircraft in-app. I am not a developer.) 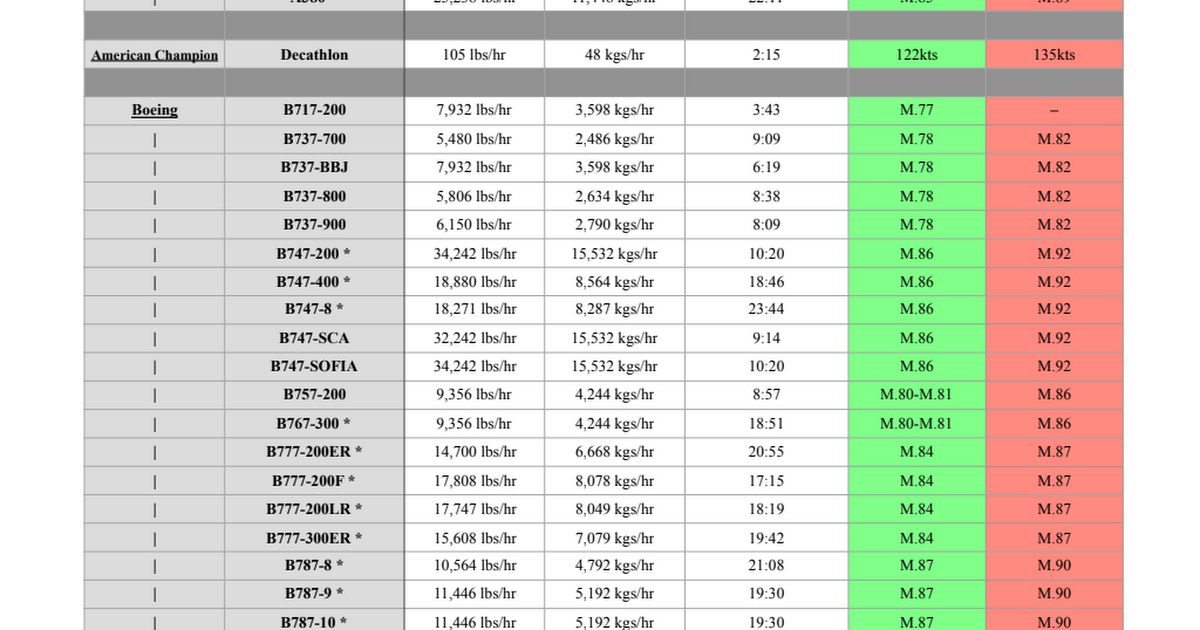 
For better viewing of the numbers, save the image to your device or download the files individually. Otherwise, I’ll re-upload them in a different manner based on feedback. Thanks!
143 Likes
How to save fuel
1hr Short On Fuel across the Pacific
MD-11 can only fly 12 hours?
How to save fuel
Max speed, Mach limit, and a HUD technical problem
Fighter Jets
Question
Crashing (Plane)
Infinite Flight Fuel Burns (Estimates)
Speed & Flap settings
Cruising speeds
777 fuel Consumption
FuelCalculations
FuelCalculations
748 Question
Cruise
What’s the Best plane for Long distance
From London to sydney
Refuelers || Tracking Thread
Time to Fly Long Range!
Time to Fly Long Range!
Optimal speed
Fastest Cruise?
What Are Mach Speeds?
Aircraft Ranges
Fuel calculation
747 fuel problem
787 Range
Longest range in IF
Fuel Issue
Best plane to use for 10+ hour flights?
Overspeeding
Is there a speed limit at or above 40,000ft
Turbulence?
Speed Violations
Please help me
Low fuel on long haul
Daniel14 October 12, 2017, 1:42am #2

I probably should use this instead of guessing now…

This is just to give you an overview of the fuel burn & flying time for a given aircraft. Right now we’re unable to see both of those elements from the aircraft selection page.

I loaded my 789 to it’s maximum fuel level and was getting 18:30 minutes while cruising.

Alright, I’ll look at it here in a few mins after I finish my current flight. I may have to update this list sooner than expected.

Would love to help you out, if you need it.

This is fantastic! For the time being, I’m just hoping fuelplanner.com is accurate…

Wow Deer… thanks so much for this. Great post!

I’ll work on getting a kilogram conversion. Give me some time to get it done. I’ll be sure to post it on this topic when its complete. So keep an eye on this. Thanks.

I have used onlineflightplanner.org yesterday, as soon as I have updated, to plan a basic route between EGGW and EGBB. The fuel estimates by this planner was almost 100% accurate. Have a look at it guys, I think it’s worth a try for route and also fuel planning as well.

Thanks! Just what I needed

@DeerCrusher. MaxSez: Good stuff, Copy to Flight Bag & Bookmarked…
Have a BZ Placket for your “I lov me wall”. Well Done”

Thanks a lot for the data, very helpful!

It’s interesting you mention this. I was messing around with the speeds last night and between .85 and .87 its a minimal difference in terms of the burn. .85 - .87 is where the sweet spot is. I suppose it depends how much faster do you want to fly. 🙂

Thank you, this will help tremendously with time as it seems I’m on the ground more just trying to do calculations.

Thank you DC. Now I don’t need to guess and make an unexpected stop lol.

I think the 77L numbers are a little high. It should have the same-ish fuel burn as the 777-300ER as both aircraft are essentially identical save for fuselage length. The 77L numbers should be a little lower, though I might do a little testing on my own to validate that.