Was literally coming to say the same. The latest Beta does not connect, I need to revert to a previous one.

Yep, it looks like my changes for the upcoming IF update are rendering it incompatible for the current version. Sorry about that! Solution for now is to revert to a previous TestFlight version. @karl_iszler @Bob_Robert @JavierW

Just last night discovered that you can choose Mark as your co-pilot voice! Very wholesome and reassuring to have the same voice behind the video(s) that taught me how to fly these planes calling out flaps settings in precisely the same cadence… Except he addresses me as Captain lol.

I bought the app and now i came to know that i need to spend more money on getting more features what is this? I spent already on installing the app now why do i need to pay more?

It takes a long time to code something like In-Flight Assistant (believe me, I know from experience lets just say) - that sort of work is not something that is to be done for free.

I’m on the public beta version and have reverted to the second last build as the most recent one isn’t working currently.

I’ve previous purchased all the add-ons and went to select “restore purchases” as they were asking me to buy them again to use them but then I get an error message saying “no purchases to restore”.

Is there anything that can be done to fix this or is this a known issue currently?

Because people don’t work for free, maybe? Would you like to spend hours coding an app, as useful as this one, and give it away for free just because?

Thanks for the insight. I’ll see if John has anything to add as well. It did work on a previous public beta version though, I believe.

So happy to see this again!

Everything works here except the VNAV - flight plan not showing up, anyone else seeing this?

Love it all the same!

reverted from beta to latest version, can confirm all in working order except VNAV.

I have no camera shake even tho it’s enabled.

Also sometimes the GPWS warnings does not sound.

The app is already a paid one and there needs to be something that tells that there are more paid ad ons inside the app. You should just ask for a higher price as a whole rather than getting every ad on for money.

there needs to be something that tells that there are more paid ad ons inside the app. 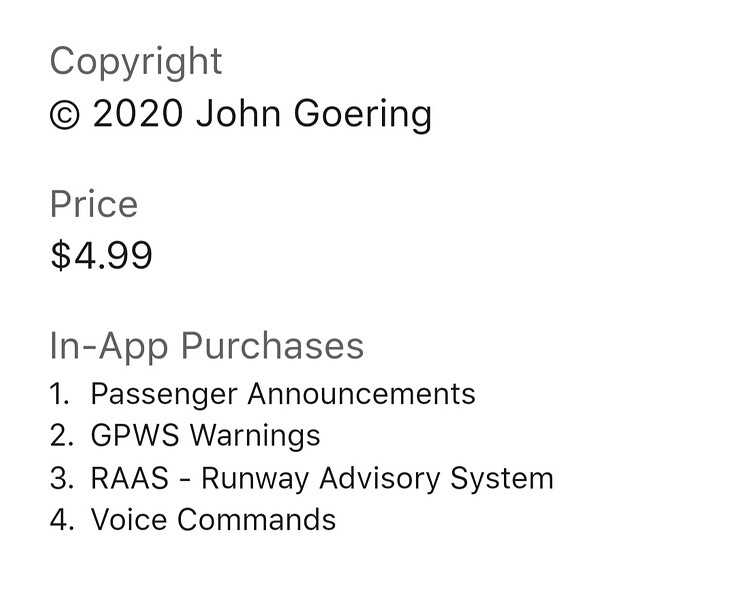 I have this app, I can confirm it is very good the rotate speeds are accurate and I always have smooth takeoffs