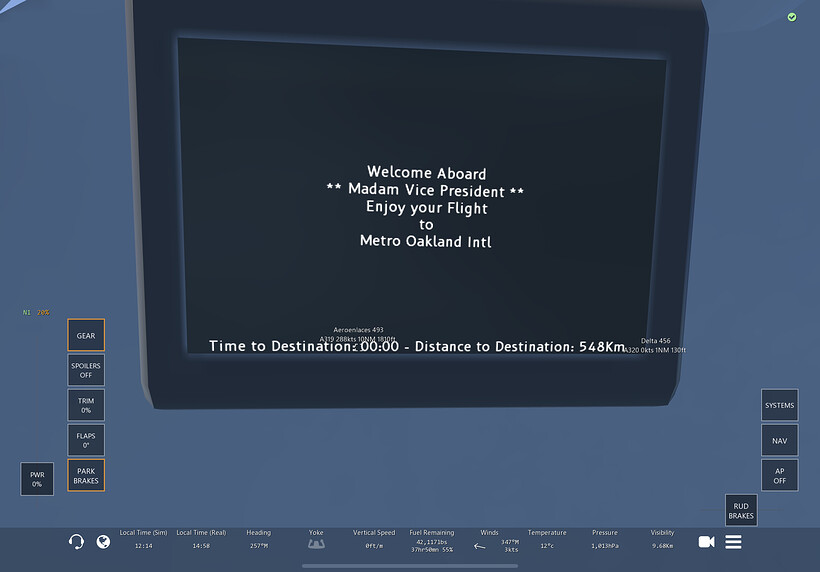 Haha, Madame… get it? Because… Kamala? Never mind…

Woah! I never knew that.

Ummm I don’t want to get political but shouldn’t that be Mr Vice President since Mike Pence is VPOTUS during the transition period.

Yeah, but then they have to change it to “madam” again in January.

True, No point having to change it back and forward.

Wow the vice president has to sit on rock hard plastic seats and do meetings in the largest open area, the restroom

What a nice touch! How cool!

Not to assume or get too political but maybe the devs side with one party?

Not a fan of Madam VP, but honestly THATS SOOO COOL like they add some cool features on the 757, ima go see if its real.🥰

The president when he flies on the 757,

He doesn’t, that’s the point.

Actually yes, especially for domestic flying , every time he came to Dallas he used the 757

Which is about ever 3 months

Quite often actually when airports have restrictions.

Any Air force Aircraft with the president on it has a callsign of Air Force 1.

Any air force Aircraft with the Vice President on it is has a callsign of Air Force 2.

No matter what type, just they must be on the plane

I’m just saying, the current VP is Pence until January.

Wether or not the IF team is biased, I don’t care if they are or aren’t and don’t like seeing people accuse them of that.

In his second post, all Lee was saying was that Pence is still in office (wether you like it or not). Sure his first reply was a bit controversial, but his second post had no intention of starting an argument from what I understand it as.

I’m over and out, don’t wanna get involved in this any more than I already am.

So what? Stop trying to start political arguments and drop it.

He’s just stating facts, I’m sure he has no intentions of starting a political argument and risk getting banned.

It’s the fictional world of IF where Laura is the VP and the President at the same time. That’s it, seems simple enough to me.