How to make my graphics better on iOS?

My graphics are all on the very highest setting (I checked loads of times!). But things like terrain and the planes are still a bit blurry. I’m not getting the expected level of quality. I know the terrain has always been blurry but this is just a little too much. Thanks for any advice!😄 This is NOT in live. Just in solo.

It’s just the way it is.

If it’s on live it won’t change

Turned on anti-aliasing?
And did you uncheck the limit framerate box?
If still blurry…appointment at the eye doctors office…😂 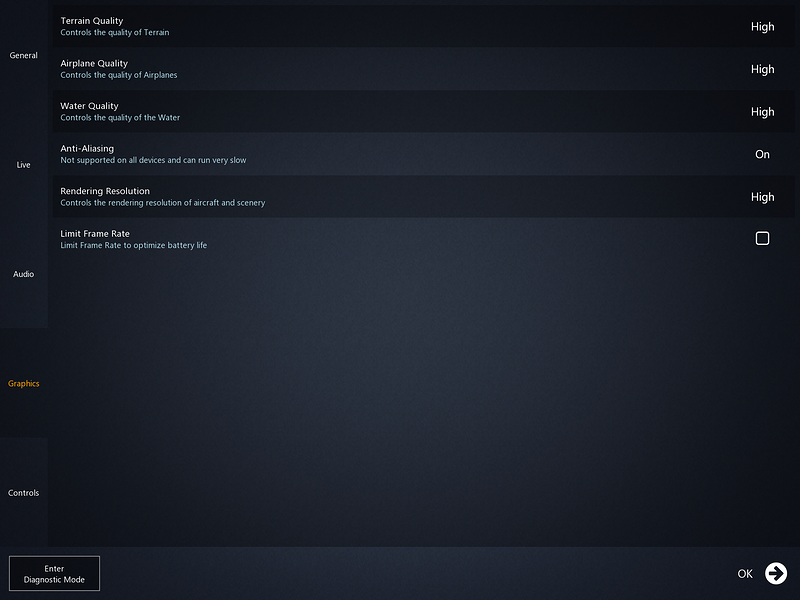 If it’s only in Solo…iam not sure there is an error in the app… and i dont see lagging in his post
But if this not help , try a good reset (home +sleep for ten seconds)

I have said that turning off anti aliasing is to stop lag if your connection isn’t very good this blur issue is not due to lag or connection issues so if everything is on full the problem is with some thing else, @British-Airways have you reinstalled the app?

Lol…i asked to turn it on…
possible you right, but before he re-install the whole thing…( what can take time to redownload all the stuff ) i would check these things first…

Guys. It’s not lag (it is on my iPad but I don’t use that for IF any more so it doesn’t matter). It just to make the airplanes have better quality. Anti aliasing seems to be working. The problem is pretty much solved. I don’t need to re-install the app. It’s ok. Thanks so much for your advice though. All of you! Really appreciate it!😄

Anti-aliasing is to smooth out all the lines. On the runway, on the aircraft and everywhere else. Limiting the frame rate only affects how many “photos” are taken of your aircraft, having it on will only make the animations a bit more stop start (although you can’t see the difference).

on my ipad neither terrain or air