I try it for hours, but I just can’t land the 717 smoothly or even as an normal landing! Is there someone who has some tips on how to land it smooth?
Thanks!

The 717 has a very small range in terms of the speed where it will remain stable. That specific speed is based on a lot of factors such as weight. All I can say is play around with the speed until you find that sweet spot, and remain on that until landing.

And do you have a speed where you land it mostly on?

You can’t expect butter all the time by using the same methods on different aircrafts. You just have to find each one of them by trying over and over.

Again, depends on several factors. There’s no magical speed for the 717 to butter all the time in every situation.

It’s quite obvious because those aircrafts are much more heavier, which can be easier to control comparing to the 717, and they also have much more better and accurate updated physics systems. 717 is a very old aircraft both IRL and in IF, so like I said, obviously it should be much harder to land smoothly. In this case I think it’s really up to your personal effort if you want the same butter of the 777 and the 787s.

Sorry that I can’t give you useful tips tho.

I know a guy who has perfected the mysterious art of flying the 717. @RoyalJordanian any tips you can share?

I Think eveen @AvioesEJogos did too
We must consult the elders

Here’s something that might help. It’s an ancient post, but it’s all I could find. Might still be relevant though, since the 717 is ancient too lol.

The Boeing 717-200 is one plane that is rather difficult to control, not because of an old design, like the A321 before the update, but because, as stated in another post dedicated to the 717, that the Devs added the faults of the original plane. The most obvious thing is the 717s rapid acceleration (with only 40% thrust needed for achieving 90kts) and inaccurate speed given when one activates the A/P for the speed. This is a tutorial that covers the trim, flap speeds, flaps needed for takeoff…

But basically, cross the runway threshold about 130-135 knots, and hold the nose really high, aka aggressively flare. That’s the general advice in that post

It’s better not to cut the throttle until you are on the ground. If you cut too early you will slam into the ground.

if he wants to crash while on a practical test, or slide and do some Tokyo drifts while trying peacefully to land, I can give him tips
otherwise, he really doesn’t need/want my tips haha

Haha, no I don’t want that

So I thought that maybe someone has an speed where he/she can land relatively smooth with.

Another tip that isn’t realistic in the real world, but is a life hack in IF is setting the speed on autopilot, and keeping it on until main gear touchdown.

That’s how I got this landing: 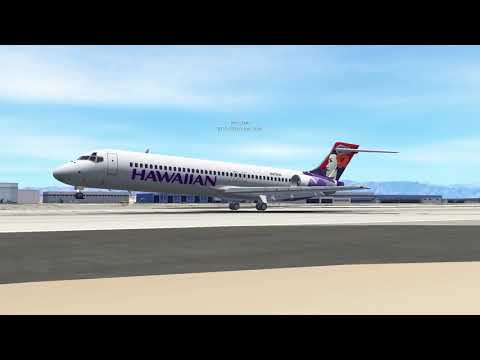