How do I handle this?

I could be doing this all wrong but ive read a few posts on the forum but didnt quite get it. Recently saw the picture of the approach all lined up so well, so i gave approach a try again. There are many tower and ground tutorials available but havent seen much for approach or departure. I intend to take this scenario to learn from it. Though its on PG, i understand my limitations on control, nonetheless, i hope to get some insight on how the experienced approach would handle this, or perhaps this shouldnt be happening.

At first i had a few aircrafts contacting me from far away with a flightplan similar to other aircrafts. So i lined them up behind each other asking them to maintain the same speed. The one closer to the airport at lower altitudes until perpendicular to the runway, i get them to make the turn so the runway would be directly infront of them. Then decent them to 3000ft to intercept the gs.

Then suddenly a bunch of aircrafts came in like this, in so many directions. They had flight plans and this was their flight plan. I would ask some to turn perpendicular and maintain a certain speed which they acknowledged but didnt follow.

So because they have more flight xp, i might be doing it wrong here. Anyone can help me out with some insights?

I left the position when faced with this picture above.

Approach is very fun, even when it gets busy. Your whole head needs to work and you need to keep track of where every single flight is etc.

Here is a method used by many ATC IRL. Vector aircraft like an S, see picture below: 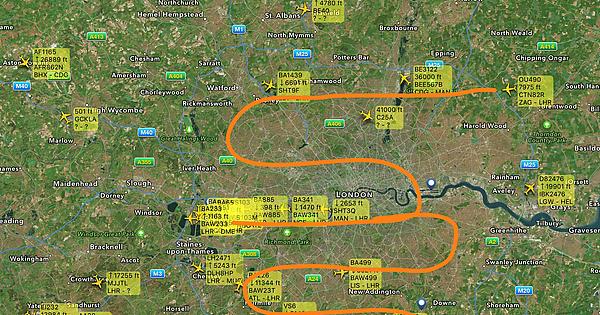 In your case I would most likely do it like this: 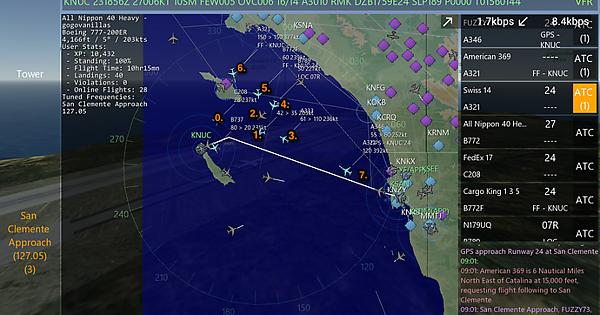 This is just how I would do it. In many cases you start off with no airplanes and your line builds up, that’s when it is easy. When you just join and everyone is not acting correctly, it’s very annoying. Just keep on trying! You will be better by the end, I promise ;)

Thanks samuel, that was insightful and also to your additional numbering for easier understanding.

At that time, before 6 and 7 appeared, i was intending to get 0 west then make a s turn east before turning in to intercept.

I wanted 1 to land first and was trying to get 2 to contact me, i cant remember why i didnt take too much notice of 2. I guess i ignored 2 completely, he was either on a unicom or with tower, just then, i wanted to turn 1 down west and make an s turn to follow behind the route 3 is using. After 2 lands, i would want 3 to land. 4 to slow down after making the turn.

Then 7 appeared but 7 was actually 2 planes xD on top of each other from ksan. I was about to seperate the 2 aircraft at 7 then 6 came in.

So im stuck with 4,5 and 6 in that weird position where 4 and 5 didnt turn as i told to do earlier. So i was actually stressed out and closed approach.

On top of that, some aircrafts was flying about 400-600kts below FL180, the only thing they did was slowed down when i said to do so.

Though i would also like to ask how you would instruct a 36 as approach since i dont see that option around. Do i need to give 4 headings manually?

Anyway, really thanks again for providing this insight. Atc is really fun and i dont alwayd get to see approach on, so when im on it, i really only intend to do well but theres only so much i can handle right now.

I find tower to have the most comprehensive atc commands. But most people like to be on tower, me likewise xD

Great questions. I am currently beginning work on my tower tutorials, but approach/departure will follow shortly. Be on the lookout! I’ll explain how to set your arrival sequence and issue approaches. Take care!

If you need an aircraft for your tutorials I’d happily come along.

Yea, 4 headings for a 360, that is how I do it. Also try to take the advanced ATC test and people will actually listen to you when you control there, otherwise just ghost.

I’ll look forward to your tutorials!! Ive watched your other tutorials and they were really helpful. Thanks!!

Ive watched the tutorials and the sequencing one too. But ive not seen the number sequencing for approach. All i could do was dictate speed and where to turn.

Ive seen a scenario like this one i have but all of them are asking for flight following, i dont thing proceed on course was a good reply. So i always dictate them =(

Maybe when Tyler release the approach tutorial i would be able to learn a bunch. Right now i depend alot on what i find here and watching how other approach guides me, but most of them disappear like i did.

I would need to go gain some xp, when i feel ready to take the next step i will ^_^

Theres definitely more complicated scenarios that i have yet to experience, my lack of knowledge will also compound to bigger issues practically.

Im always in awe when i see someone here posting their thanks to their approach and when i look at their work, its defintely inspiring to want to be like them.

I would love to see the picture you wanted to show me as well but it says theres an error in the link.

Ok here is how I would play it the Cessna 208 is the closest so bring him in first as Samuel said maintain his best forward speed. Next you need to get everyone on the same approach you can’t have them all going on FF which they are so broadcast the only accepting ILS approaches. Once hats done now you can start building your pattern.

Hope that makes sense and helps

It does make sense, thanks for the input. I’ll be sure to utilize some of these techniques when im on live again