Harrison Ford near miss with 737

Photo taken by someone in the terminal showing Harrison Ford landing on Taxiway C (http://www.tmz.com/2017/02/16/harrison-ford-plane-landing-photo/)

Here is a video. It was pretty close. How could he not see the runway markings? 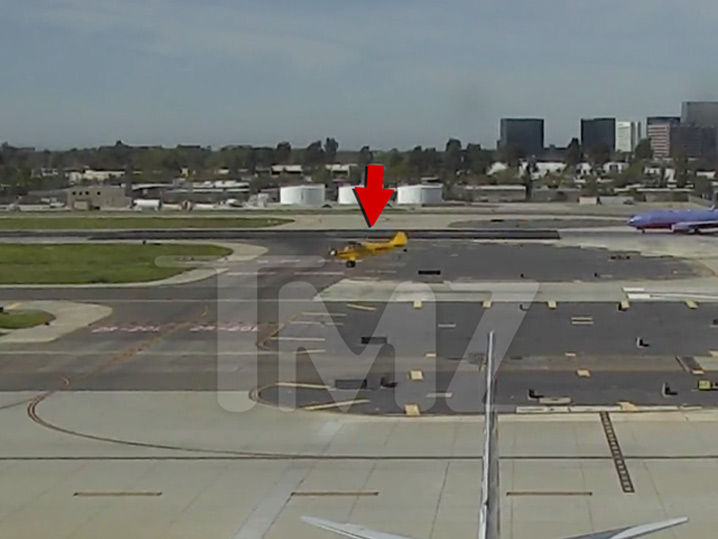 It was actually a nice landing! Looking at the airport, I can see a human factors problem here.

Runway 20L is mainly black / grey, however the top end of the runway where the runway numbers 20L are white on a light asphalt section.

This has the effect of somewhat masking that its a runway - the runway numbers blend in a little too much. And there are no piano keys.

On a low, curved approach this could well lead to him being misaligned with the runway.

So of course he made a boo boo, but if the top end of the runway was dark asphalt and the runway numbers were on a dark surface, would this incident still have happened?
The lack of piano keys really doesn’t help either.

This is a phone call Ford made to ATC following the incident. You can hear the humiliation in his voice :( I feel bad for the guy. He said he was distracted by the heavies. It’s still no excuse for what happened.

Calm down he approached a battle station faster than the light with the millenium falcon. And made the kessel run in less than 12 parsec xD.

I don’t really see how Han Solo missed the giant 20L markings and landed on a taxiway that’s probably half the width of the runway in broad DAYLIGHT!

His situational awarness is really bad. He flew into the airfield I was training at and he almost hit one of the parked planes. And also other incidents in the air which I don’t wish to mention. Really nice guy but man his skin is so leathery😂

I’ve read an article saying that no legal action will be taken against him regarding this incident.

Agree, can’t believe he has got to keep his licence, the cynic in me tells me that it was perhaps because of who he is, couldn’t see an ordinary joe bloggs being treated in same way, but hey, I could be wrong.

Maybe my dodgy landings are not so bad after all😁 Mr Ford sets the benchmark, ATC take note when dishing out those violations 😁

Are you surprised? That guy has enough money to buy the state of California.

You can’t blame him, some people just like to live on the edge… A life filled with adventure. I’m sure it was intentional.

I for one am glad he gets to keep his license. A serious mistake yes, but one he admitted to immediately on the radio. His other 2 previous accidents where from mechanical failure, in which he landed successfully without loss of life.