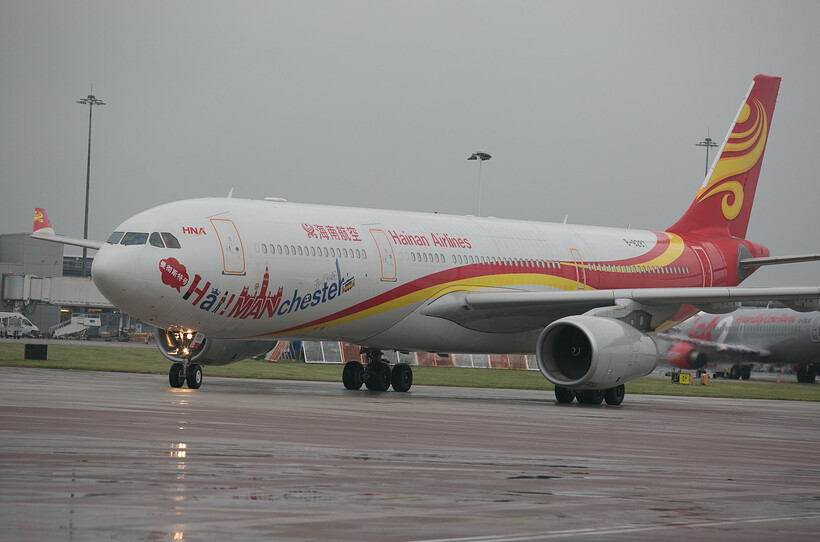 About this line(ZBAA-EGCC) and this aircraft
This aircraft was used for the maiden flight from Beijing to Manchester in June 2016. This line from ZBAA to EGCC is used to compete with the line from Beijing to London Heathrow operated by Air China. Hainan Airlines provide a colorful livery plus this Manchester drawing about Manchester’s famous places of interest and letters written in both English and Chinese. It’s better than the commonly used A330-300 Hainan Airlines livery.

This livery is on very few planes, which makes it special. Registration B-8287, Serial #: 1703, MODE S
780EF8, age: 3 years. This aircraft is mainly on European Routes, such as Beijing-Manchester, Beijing-Brussels, Chongqing/Shenzhen-Rome, etc. and some Chinese domestic routes.

You did part of that upon edit.

Hi,IFC! [%E6%B5%B7%E8%88%AA330] About Hainan Airlines Hainan Airlines Holding Co., Ltd. was founded in January 1993 in Hainan Province in China. It has grown from a small domestic carrier to a global airline, with routes across the world. Hainan Airlines is the fourth largest airline in mainland China. The Hainan Airlines lounges at Beijing Capital International Airport covers a total area of 1,397 square meters, comprising: a lounge for business class passengers, a lounge for Fortune Wings …

Please feel free to reply if anyone has any ideas.

The livery of China Southern B787-8 is their regular livery:)
CSN do not use their traditional livery on 787 Family.
Maybe you are right😄

Definitely want this since EGCC is my hometown airport! I also really like Hainan Airlines livery in general! Cant believe we dont have any of their liveries in yet for the a330 and 787!

Thanks for the support.:)

You are not the boss of him.Or are you?