Good spotting for SFO or any Bay area local airports?

Hey IFC, I was wondering for any of you guys who are out in the bay area know any good plane spotting places for SFO. Personally I have never been but I am getting a nice new camera soon and I hope to go spotting soon and share some shots I get with you guys. Also it does not have to be SFO it could be like OAK or SJC or like half moon bay lol. I would like to hear what you guys know and think. Also feel free to pm me too if you have any additional info. :)

Hey Leo! I’ve gone spotting at SFO a few times and have a couple of my favorite locations.

Bayfront Park and the waterfront are the two best spotting locations I can think of currently. The Westin hotel is a great area too. Those locations are mainly for spotting arrivals on runways 28L and 28R. Great parallel landing viewing!

I’d recommend checking this site out for additional locations: 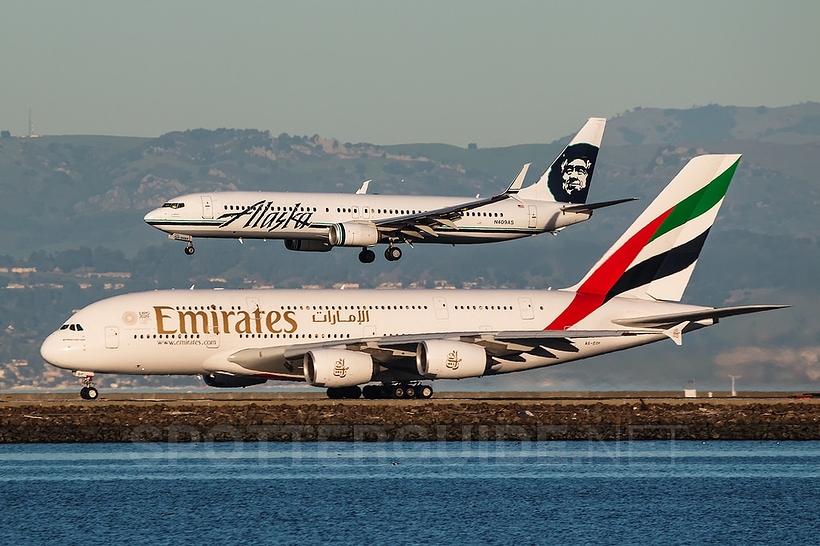 San Francisco´s airport handeld almost 56 Mio passengers in 2017 and is the seventh-busiest in the United States. The commuting area of SFO/KSFO is very huge […]

There are some great parking garages on the north side of the airport to view from too.

I’m sure @ran and @GlobalFlyer1 will be excited to give you their tips and tricks, they spot in the area a lot and have gotten some beautiful shots.

That sounds awesome I will definitely check that out also thanks for sharing that link. When I go I will be sure to share some pictures with yall :)

Oh sounds great, you got me all excited now ahha :) thx

For San Francisco, I believe @GlobalFlyer1 & @N2628P know a lot more places than me.

I suggest that you go to Bayfront Park (as @Lucaviness said). The other place you can go is Level 8 Parking at International Terminal Parking Concourse G. There should be an air train station that gives you direct views of a few gates of Concourse G. (The parking is paid, about $4 for 30 minutes)

If you wait for COVID-19 to subside, then you could potentially head to the Skyterrace at Terminal 2.

For San Jose, there is the Hourly Lot 2 Parking Garage. You can go there, it’s around $4 for 40 minutes. The views are alright, you’ll be able to see the departures & arrivals from 30L & 30R.

Oh that sounds great thank you for sharing, I will be sure to check some of these places out! :)

Bayfront, coyote point (thanks @GlobalFlyer1) and quite a few different parking garages provide great views of arriving, departing, and taxing aircraft. If you would like to check out the United’s tech ops hanger, be sure to check out the north access road!

If you would like, you can pm me tomorrow and we could talk over some locations, and pricing for garages and stuff.

Yea sure, I will be sure to do that. I’ll message you sometime tmr afternoon or night if that works. Take care :)

There are a couple good locations at San Francisco, one is for spotting mainly near the gates so you can see pushbacks, take long exposures, or see some departures, and the other is the Skydeck.

The skydeck was opened in February this year, but is currently closed due to Covid. From there, you can see all aircraft taxiing to the runway from the G gates, terminal 2, and terminal 3, along with departures on the 28s and sometimes even 1s. You will need a lens hood or similar though to avoid reflections, especially at nighttime or sunset.

The other location is the parking garage for the G gates. Currently international terminal concourse A is closed, so it’s pretty useless to try and spot there but go ahead and go there once it reopens. You can see taxiing planes, aircraft that are pushing back, and departures on the 28s. If you’re there, you can also just take the Airtrain around the airport, and spot from one of the stations. The terminal 2 station is perfect for 28 departures and aircraft exiting the runway, and terminal 1 is good for 1 departures.

For SJC, there are also are 4 good locations for spotting, though 2 of them cost money.

One would be the daily lot 6, which does cost some money, but from here you can see all departures and landings on the runways, as well as all aircraft taxiing (except UPS and private planes). Only good time to be here is early morning until about 12 or 1 pm, because otherwise your pictures will be backlit. The other location that costs money is hourly lot 2, it’s a parking garage and you can just walk up to the roof. You’ll see all departures on all runways, and the best time to be here is early morning to 1 pm, since they’ll be backlit otherwise. It’s also good for long exposures of the airport at night once the sun has set.

For landings on the 12s, you can go to this parking lot on Martin Avenue, which is supposedly closed but you can enter and security doesn’t generally care. You can also see takeoffs from the 30s, or aircraft exiting the runway. The last location would be the in-n-out near Avaya Stadium or the designated parking lot next to the “SJC” sign (also near Avaya Stadium). The parking lot is closed currently, but you can park at in-n-out and just walk. You should see all arrivals on the 30s, as well as departures from the 12s in the air already at about 1,000 or 500 feet. Best time for both of these locations is 1 pm to sunset or nighttime, otherwise they’ll be backlit.

Wow I really appreciate the help, I will definitely be checking that sky deck out at SFO when it reopens, sounds so cool! For now I think I will stick to SFO as it is closest to me but now that you gave me some cool places for SJC I will definitely have to check it out one day! Thank you for sharing 🔥