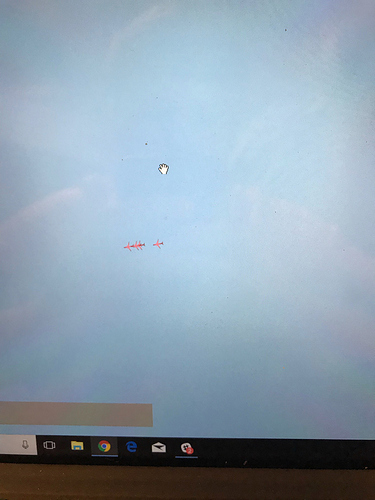 Do you mean you can’t see each other’s airplane model? Or is it on the map?

Right, we cannot see each other aircraft.

In your settings, under live, what setting is “airplane count” at?

Maybe try bumping it up and seeing if it helps.

Also, how far away from each other are you? I can’t tell from your photo.

Yeah I just tried that didn’t work
with in .5 of a mile before we lost each other

That sounds pretty strange, I don’t have an explanation for you.

we had been able to see each other after departing Honolulu

When in the flight specifically did it happen? Do you know the exact location?

Yeah this is a first for me, Probably happened about 4 hours 15 minutes from our airport. We’re on a direct path from KEAHI to BURLE right now

Maybe if you get really close (<.5nm) they will reappear. I don’t know, it’s all speculation tbh.

You will probably have to redo your flight or restart your device. Sorry and good luck 👍

Yeah it’s odd I have never had this happened so ! Thanks for the help!

Were you using WiFi or celular data?

Well glad we aren’t the only one who saw it one of our guys still don’t see us. Hopefully real soon he can!

Other airplanes not visible in-game. Live

I am currently flying from RJTT to PHNL with some other people and we have the same issue. We can’t see each other even though we are pretty close to each other. It happened to every single one so I doubt that this problem is from our devices. We can see ourselves on Liveflight, that makes it a lot more confusing. Is there currently a server problem or something like that? A youtuber is currently streaming that flight (I am flying with him). [Infinite Flight | Heavies In Hawaii @PHNL (…

Made a topic about this some time ago… But as you said, it gets fixed after a certain amount of time. Weird thing is: It happened to us near Honolulu too.