As you may know, or not. At the beginning of this whole coronavirus crisis, circa early March it was announced that EasyJet would be going ahead with the distribution of dividends to the tune of £174 Million to their shareholders, this was clearly met with uproar given everyone knew the dangers all airlines faced even before the lockdown was implemented. Stelios as you may come to be aware of is one of the majority shareholders and founder of EasyJet so these dividend payments would be mostly going to him, the sum being £60 million for his 34% share in the airline.

Anyway, to counter this outrage Stelios released a statement. He clearly has a lot to say and does allude to many scandals going on within the EasyJet management while also suggesting that some could be engaged in corruption.

The statement is to be seen below: 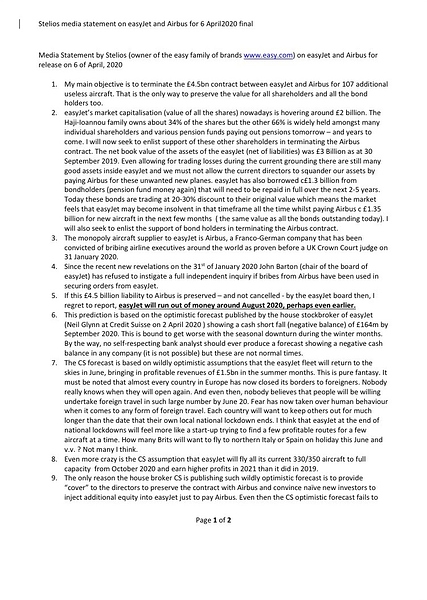 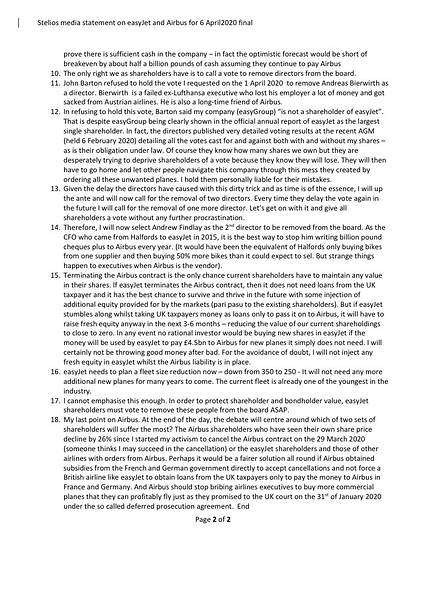 I’m sure you will agree that this is interesting and since then it has been announced that indeed EasyJet has received a £600 million loan from the Treasury and Bank of England’s emergency coronavirus fund ie a bailout. It’s interesting to see what will happen continuing onwards, will there be directors that get removed or orders cancelled? We are yet to find out.

Honestly don’t have time to read the document. Can someone summarise for us simpletons?

My 0.02 cents, btw, you can’t really blame Airbus for bribery, lots of manufactures do this. Like Boeing and Hawaiian, bribing Hawaiian to buy 787’s instead of A330’s.

The letter is just utterly ridiculous. You would expect a businessman to have a bit more seriousness, but that’s probably not his way of life…

Anyways, thanks for bringing this you our attention!

I read that letter in full. I actually find that a lot of the points he makes are very valid and apply to the current situation in easyJet. What exactly do you not find serious, @JulianB?

you can’t really blame Airbus for bribery, lots of manufactures do this

I don’t think this is a credible explanation to explain Airbus’ actions. Your argument in support of Airbus is “Just because someone else is doing it, this means it’s fine if I do it too!”. This is just like saying “Bob here is killing people for no reason, and if he’s doing it, it’s fine if I do it too”. Just because other companies are bribing officials does not mean that it is “okay”.

Overall, I agree with Stelios! I don’t understand why they should honour their deal with Airbus for more aircraft considering that the demand for air travel will not return to normal levels for quite some time. Furthermore, Stelios is a majority shareholder for the company, which means it is in his own best interest to support easyJet during this crisis. I don’t see why he would suggest something that may do otherwise?

I didn’t say it was good to do it.

Almost every manufacture here does it. Like the Boeing example, doubt Easyjet will ever take Boeing, it will be the same thing in bribery, that is why he is trying to get it out of the contract another solution will be the same crap, which is good during this pandemic.

I actually find that a lot of the points he makes are very valid and apply to the current situation in easyJet.

That’s true, yes. I just found the way the points were delivered really odd at times.

Some examples I probably wouldn’t use as an important shareholder:

“By the way, no self-respecting bank analyst”
“This is pure fantasy”
“naive new investors”
“with this dirty trick”