Cool stuff. I can fly it higher but from where I live there is constant arriving and departing air traffic, I don’t like to lose sight of it, unless I’m at my house upstate where there isn’t nearly any air traffic.

i use the p3p, gotta love Black Friday ;)

Nice. My school is having a drone class next fall so I’m taking that to get that certificate

They haven’t, but they could. A drone is roughly the size and weight/mass of a bird (if my calculations are correct), meaning there is the possibility of a bird strike-type event occurring with a drone being sucked into an engine (although improbable). It’s no US1549, but it’s still a serious matter which could (although unlikely) cause an accident, or at least engine damage. Depending on construction, an RC aircraft may have the capability to cause damage to an aircraft, however it depends on the materials involved. For the most part, drones are mostly going to cause material damage to an aircraft (akin to birds hitting planes and breaking windshields, radomes, etc. which is also serious and would require a return to the airport). This is, of course, assuming the drone hits the aircraft at all.

TL;DR: Drones most likely won’t bring down a plane, but they may cause serious damage akin to a bird strike.

I think that you should be able to explore historical areas, but strict restrictions should definitely apply.

Drones are amazing aircraft that can take stunning views of the amazing Earth. However it is not gonna be long before a plane is taking off and sucks up a drone, loosing an engine and the plane has to go around and land, or in worse case, it looses control and crashes.

What they should do is in city areas, all non regulated drones must be below 1000ft. When within 5 miles of an airport, below 500 ft, within 2 miles, banned. Airports should have the technology to see drones within 2 miles of the airport. Then shoot them down with non-interfering inferred weaponry. Or even better, have aircraft able to see on radar, see drones within 3 miles and either avoid or shoot it down with the same weaponry. Definetly put this on the Airforce One fleet incase someone try’s to fly drones into the engine, killing our president.

When Singapore Airlines A350 did a low-pass in Perth several weeks ago, It appears that a drone passed above the plane by 300ft. This case is still investigated by related authorities 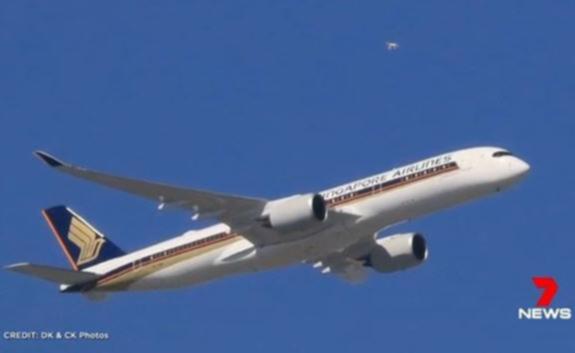 I think these incidents should stop. The authorities should have take an action when they see a drone flying close to a plane by capturing them and detect the owner of the drone

We cannot fly more than 500 feet

Guys, about specified areas for drones, there’s quite a few actually. You can check here. Zoom in towards your location you want to see, and you’ll see little circles, with colors of purple, red, etc. Those are UAS operating areas or drone operating areas.

They can install GPS Tags to block higher-end drones from flying over restricted places but that will be a lot of work. For lower-end drones and all drones in general they can make a program to detect drones and sound an alarm.