The Delta A350 would look absolutely stunning if or when the A350 family is added. Tell me what you think below. 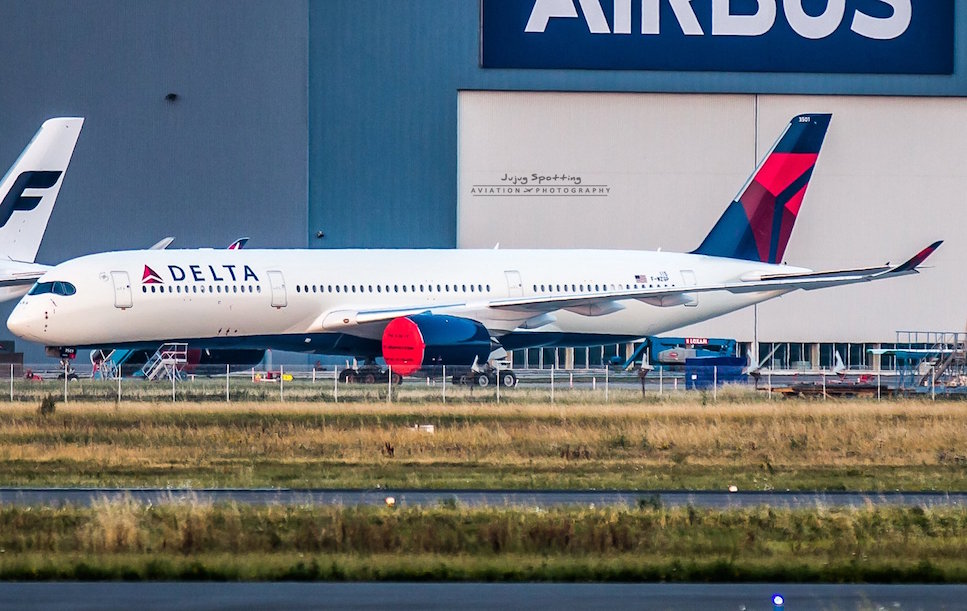 On Wednesday, Delta's first Airbus A350-900XWB emerged from the paint shop near the manufacturer's facility in Toulouse, France dawning the carrier's paint scheme. This is the first of 25 frames that the Atlanta-based airline currently has on...

Yeah because this would just be a copy

You have to wait for a mod close it

Liveries are requested separately, this has no conflict with the already existing A350 family topic.

If that’s correct then the topic is fine

I’m honestly very surprised nobody suggested this yet. If it didn’t have that ugly raccoon colored cockpit windows it would have my vote!

I first didn’t like the paint around the cockpit windows but there sort of growing on me.

I kinda like the A350-900 now. I’m both an Airbus and Boeing fan but the A350 hasn’t been my favorite Airbus aircraft but I’m starting to like it :). I love how the engines spool up during takeoff. It’s cool that the cabin gets quieter after rotation and I believe this happens sometimes. Correct me if I’m wrong. This is why I’m starting to like it ;)

The Delta livery on the A350 is absolutely fantastic! It would be really amazing if FDS added it into Infinite Flight during the development of the Airbus A350. I just wished that the Delta 787 existed in real life but they cancelled their order and replaced it with orders for A350s instead. That’s ok, I’m just getting started to like the A350. :D

I wish I had more votes…

Actually, Someone have requested this feature before. However, it’s already pretty old and I suggest to contact one of the moderators to close this one and keep this one to stay open as this one is newer and equipped with the real picture

Delta ordered 25 of these to start being delivered next year! I love my favorite airline’s livery on my favorite Airbus plane. This is a must have for me if we ever get the A350 in Infinite Flight. [image] What do you think?

I wish I have more votes for this. This livery shouldn’t be forgotten ❤✈

I’d really like to see this beauty along with the A350 in IF one day :)

Well, then vote for it!

If they gave me more votes ;)

Wow! That’s an amazing livery that I would love to see it pass over my house in Atlanta

Nice livery, ran out of votes tho. I think all of delta’s liverys are nice. My favorite liverys come from Delta, Frontier, And any foreighn airline. I think this would be a neat livery to have especially on the 350 with the delta logo’s on the winglets! :)

This, the airbus house colours, Qatar, and British Airways are my favourite a350 liveries. Absolute stunner

If everybody likes it then vote for it!😀

This would be great in IF! I would fly this all the time.