Hello good fellow pilots of the forums, my friend and I got into an argument today about whether or not the conspiracy theories hold any water when looking at my favorite airport in the world, Denver International Airport.
Now most people should be well aware these rumors are nothing but gossip and speculations, but once in a great while people come to be who actually believe them, my friend being one. He refuses to fly through DIA (choosing the less busy KCOS) because he does not “want to support the nazi and New World Order that is evolving in the basements of DIA”.
I thought it would be a useful and educating tool to post the top 4 Conspiracy theories and explore them in depth with all of you. If you have friends or know people believing that this airport is some sort of base, let me help debunk those beliefs. (Sorry for the long read)

Sources:
http://rationalwiki.org/wiki/Denver_Airport_conspiracy_theories (This link here is where I got most of my information. I obviously didn’t stick to one source but this does hold the majority that you’ll see in the paper below.) 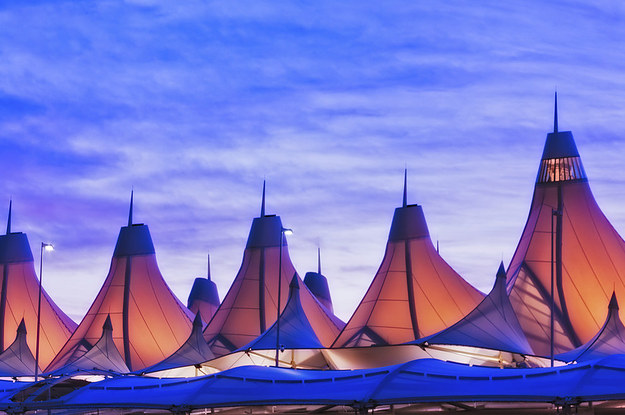 8 Conspiracy Theories About The Denver Airport That'll Freak You Out

The Denver airport is kind of a weird place.

Have you ever been to Colorado? You should go. It has skiing, the pot is free, and my sister lives there. It also has Denver International Airport (DIA) (or DEN), the largest airport in the U.S. and the second largest in the world. The airport is...

Coming in at number 4: The Nazi Swastika Seen In The Runway Formation

Basically what is being said here is that people believe the layout of the runways at DIA as a symbol of the nazi mentality. The infamous swastika from the nazi regime can be seen from aerial footage. Many people use this as confirmation that the New World Nazis are hiding underneath the airport. There is nothing much to be said about the shapes. “That is, if you completely ignore the fact that the shape has an extra arm and it’s not radially symmetrical.” (From the article) as far as theories go this one holds no water. Just because something is shaped like a symbol that used to be associated with evil does not mean it is a representation of the ideals behind it. #CaseClosed

(Coming from the source): Some claim that, in 2007, fourteen commercial aircraft spontaneously shattered windshields as the presumed result of electromagnetic pulses. In order of understand what an electromagnetic pulse is, go ahead and check again the link above. But basically, the pulses themselves can only affect electronic items. That means all glass and plastic would not be damaged. And yet people relate these shattered windshields to an EMP. So,e string theory supporters will jump in that this would still be possible if the pulse was created by a nuclear explosion and the materials, or the windshields, were hit by the blast and after effect.
I hope many many of you can see the issue here. In order for this theory to be legitimized, one would also have to agree that the entire airport and much surrounding land would have been vaporized, and not just damaged fourteen windshields. #CaseClosed

Coming In At Number 2: Underground Bunkers

Probably one of the most popular theories about DIA is that it plays host to the NWO (New World Order) in an underground system of tunnels and rooms. Many people took photos of tunnels and posted them a symbol proof that aliens and the NWO inhabited the basement at DIA. It does not take very much effort to debunk this myth.
Several people, in response to these postings of these tunnels for proof of this theory, shared their own findings. They said that while yes the tunnels were there, there were also large amounts of the converbelts in view, which were a part of a completely automated baggage system DIA had planned on employing. Up until recently, this system had lain dormant due to the amount of money it took to operate it.
Here is a quote from the article above. Please read it carefully:
Statements about DIA being an evil headquarters of the NWO boggles the mind. The Rocky Mountains are about the same distance from downtown Denver as DIA, so why build an underground facility in the middle of a flat plain under just soil? It boggles the mind after a number of nuts, including Jesse Ventura on TruTV,[11] stated the facility was built to survive the 2012 apocalypse.[12]
NORAD’s Cheyenne Mountain nuclear bunker,Wikipedia’s W.svg built to absorb a direct hit by a nuclear weapon, is ~75 miles away in Colorado Springs. If you are looking for a place for your super-villain lair, why not do the same and build a protected bunker under millions of tons of solid granite? Plus you wouldn’t have airplanes taking off over your head, which is not conducive for a good night’s sleep. that last sentence is just pure humor but it does draw a point. #CaseClosed

Hand in hand with its brother theory the “Undergound Bunker”, this theory is one of the most popular, and for good reasons. Throughout DIA, there are reports of very weird looking art. Let’s examine the top three:

The Blue Horse: For people driving to DIA or from it, they will also notice a blue demonic horse which before its final creation had fallen and killed its sculptor (leading the myth that it is a haunted statue).

The Dedication Marker: The dedication marker does contain the Freemasons crest, and there are two Freemason grand lodges in Colorado. They mounted it over a time capsule placed at the airport they organized to fill. The Freemasons are just a local social and charity organization, although the capstone is inscribed with “New World Airport Commission”: a body that does not, in fact, exist. Some locals have wondered if this was just something to drive conspiracy theorists even more bananas than normal. The New World Society named in the plaque is a collection of small businesses that helped promote the airport. The three organizations listed as members of the Commission do, in fact, exist.. For those who drive hard the NWO mention in the plaque, I hope you can now see the fact that it is not to mention some evil government that is plotting to overtake, ahem, the world.

I hope this was helpful for people how have friends or relatives who believe these theories, and realize how silly they are. If you maybe yourself believed them I hope this helps. Any questions feel free to DM me. Also, if you never even heard of these theories, well I just introduced you into one of the most bizarre and wasted gossip subjects in the US aviation world.

I had to put on my tinfoil hat for this one

This made me real damn scared, it’s half past 11PM. Amd I’m going to Denver on Monday. Nice, thanks. 😂

I say no more.

Do you mind making me one? I’m in my room comfy in bed. Just send it too me in the mail. Thanks!

Yeh good some silly theories on this airport can be debunked but their is no denying that whoever privately funded this airport is extremely messed up in the head.

Buzzfeed is not the only place that thinks these. So while yes they are reputable not reliable people, the theories they discuss are similar to other groups.

Sometimes I wonder what goes through peoples heads! All 4 of those are plain dumb. I mean, why are people scared of art? The runway formation is kidda creepy, but really? The electromagnetic pulses are high amounts of electricity going through the air, not some kind of force that can break glass.

Sometimes I think that people just say these things go get the popularity.

I would normally say the same about people doing it for views, but this has been going on way to long to be a simple publicity hack.

lol I told me friend that and all he would say was “you don’t really know that do you.” It was at that point I promptly ended the conversation and proceeded to put my tin foil hat on and pray the alien invasion came swiftly.

I too have a friend that loves conspiracy theories and one he told me was that they store way more jet fuel there than any airport of similar capacity would ever need. What for I asked and his answer was, “NWO”.
Fun stuff to talk about but I’m with the OP and that its just a regular ol airport. Nothing to exciting going on there.

The chem trails must have got you you. RIP and I’ll see on you on planet Xancatrk in 1867, which is where Bob Marley actually is

Thanks! Now I’m terrified! Good thing is I don’t plan to go there soon. That’s kinda creepy, even though I’m trying not to believe it:)

Lol sure it’s scary even though I’ve traveled there many many times ;) nothing to fear my friend. Nothing but bonus jargon