Comac's C919 is Getting Ready for First Flight

First one needs a subscription the second one is free though

So China is getting ready for the C919’S first flight, and it’s supposedly going to compete with Boeing’s 737 and Airbus’s A320. However nobody has ordered the aircraft except some leasing companies. Do you think the C919 will be as good as the 737 or A320? 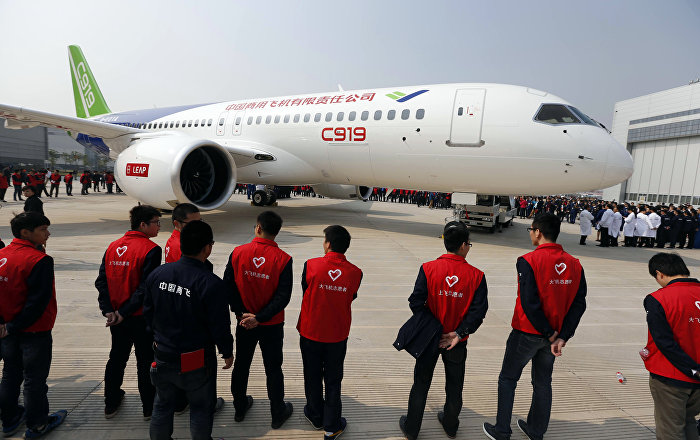 Given that the Chinese are extremely competent at copying things but somewhat behind in the metallurgy and composite engineering. No.

I’m Chinese myself. It’s good seeing more invoation and inventing in china. Right now they are mainly focused on manufacturing 😉👌

already not a fan

Right now they are mainly focused on manufacturing

That is where the problem lies. The advanced materials that are prevalent in many western aircraft aren’t produced yet in China. I’m sure it will only be a matter of time but the core fundamental metallurgy is missing. Whilst the engines are LEAP from CFM and shouldn’t cause a problem the more structural elements of the aircraft will have to pass the stress tests over time.

It’s a nice jet but, like the Chegdu J-20, even if it looks like a stealth jet doesn’t necessarily make it a stealth jet. I think the same goes for this one.

I think it is good to have more competition in the market. I believe the Chinese are going to be able to compete with Boeing and Airbus. They will have a pretty good learning curve though.

Yeah true. Let’s be honest though. The Chinese are known for ripping off other companies. Comic is just basing their planes from Airbus and Boeing. They are also kinda late in the aviation industry too 😂

The major aircraft manufacturering companies known as [Boeing] (http://www.boeing.com/) and [Airbus] (http://www.airbus.com/) are far too ahead in technologically terms for any company in China to compete at all in my own personal opinion.

It’s their first aircraft so I doubt it will be brilliant, however it’s a starting point for China’s civil aviation industry and there will probably be some great aircraft to come from them in the future.

I personally don’t think the C919 looks bad at all, but I doubt it will have many customers due to the competition being better as of now.

Debateable if you ask me. - I’m a fan of Russian aircraft.