I love using the ATC feature of Infinite Flight, and most of you probably do, too. One frequency that I noticed that currently isn’t available is the clearance delivery frequency. I was wondering, could this feature be added some day?

Of course, it couldn’t be too realistic, because if you’re already familiar with this frequency then you know that it’s a required part and could take a long time and some people might want to just fly straight away. It will have to be optimized, so that it’s quicker and easier.

If you’d like to hear my idea for the “optimized” version of the clearance delivery feature, then please let me know in a reply.

I would like to know more about your version of clearance delivery.😄

This could be added in the next update (hopefully). With this we can now prevent ppl from going to small airports if their aircraft is too large for it. ie: A380-EGLC something like that

Okay, I’m not too good at explaining things, but I’ll try my best.

Okay, first let me point something out. You’ve probably noticed that in real life, a lot goes on when making an ATC transmission. You have to thing about different things and it’s basically challenging. In Infinite Flight it’s much easier and less complicated. We need to somehow use this same method when creating the Clearance Delivery frequency ATC options.

Now, another feature that could be added but makes the process a bit more challenging is allowing the pilot to create a flight plan on the in-game map and then send it to the controller. Whenever the controller would tap on that airplane or access the ATC chat menu for that aircraft, the flight plan would appear on the map. This way, the controller actually knows where that are going, instead of simply knowing their cruising altitude, departing airport, and arriving airport.

If you were to use the second method, the controllers response would change. I will use the same pilot example above as pilot transmission in this example.

If you have any questions, please ask!

Yes, we do already have the main frequencies like tower and ground, but this will add more realism to the simulator; however, the pilot will have to be more experienced, so I guess you are correct and incorrect at the same time. You do bring up a good point, though.

No. As far as I know, clearance delivery can be used for both VFR and IFR. Normally, however, people use it for IFR.

Delivery control would be perfect addition to make IF realistic. Don’t you agree? At least all major international airport have a delivery control and IF is missing that.

@Jonathan_Hinson… Jon “Delivery Control”. Not fam with the term accept as it relates to Air Freight. Pls explain…
Max

So basically you want clearance added!

@JGK00 @Rotate I scratched my head on this one… Don’t recall hearing this term except in a military air freight context. Googled and searched the AIM… could not find “Delivery Control” cited any place…
What am I missing? Max

It’s more commonly known as clearance! Generally airlines request clearence to a region before they fly so that ATC know what flights are coming in to the airport!

From my notes, here is a list of ATC positions and each of their roles:

When it comes to exactly what Delivery does here is a typical exchange up to taxi: 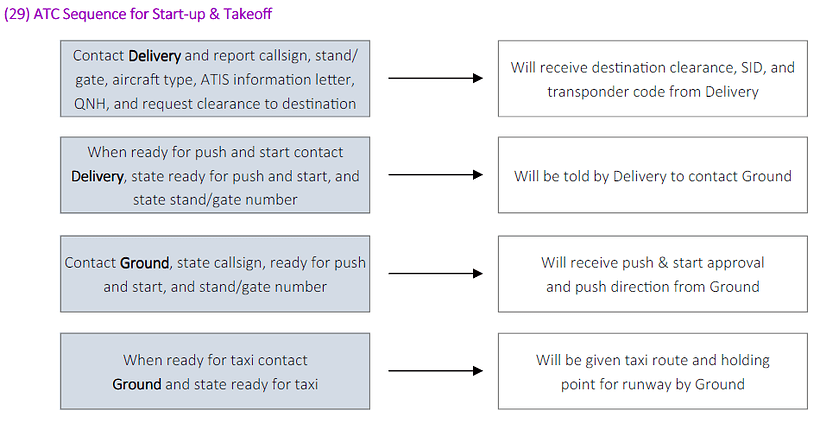 I quite like this but I can’t image 99% of people understanding it yet alone knowing how to use it //: