A China Eastern A330 has just had an engine explosion during takeoff from RWY 34L at Sydney International Airport (YSSY). The aircraft involved in the incident flew incredibly low over my house, and was having issues climbing before the explosion. Following the incident, RWY 34L was closed for 45 minutes as there was engine and wing debris on the northern end of the runway. Fortunately, no-one was injured in this accident.

The failure was not inclusive and the debris badly damaged the engine cowling.

The engine involved in the incident already had several similar failures.

(Damage sustained to the left engine)

Due to this post being based on a first person experience, the text may not be correct. The post will be updated as more information becomes available.

That’s amazing that it was over your house!
That’s a once in a lifetime experience.

Presumably you don’t live in the ocean (well maybe), so I assume the engine blew on the 2nd turn, the one after the initial course turn from YSSY. Then they rest was probably a combination of diagnostics, attempted restart, and then losing altitude to intercept the GS

Quite scary to see a hole that big in the engine of an aircraft. I’m glad that the crew was able to bring the aircraft back safely.

Was there any damage to fuselage? There is hole on engine’s fuselage side.

On the evening of 14th May, an Egypt Air Airbus A330 operating flight MS955 suffered an uncontained engine failure of it’s left hand side Rolls-Royce Trent engine, causing the crew to reject the takeoff. The failure of the engine left a large hole in the forward engine cowling. None of the 211 passengers and crew onboard were injured.

Glad it didn’t hit a different part of the plane. Even though it still hit the engine it could of been way worse. That’s a gigantic hole though!!

I was looking out my balcony when the engine actually exploded, but no engine debris came off the aircraft. I guess it came off when the plane started to bank over the ocean?

Or it for sucked into the main engine and was ripped into dust?

Crazy! Lucky you were there to see it

Mmm, the fan look fine judging from new pictures. What caused the hole? Look like there is no damage to fuselage since there is no picture of fuselage and news reported that there was no injury among the passengers.

I can see a piece jamming into the top portion of cowling, maybe it’s FOD?

Well this certainly is interesting news…

This condition, if not detected and corrected, could lead to the detachment of the engine air intake cowl from the engine, possibly resulting in ingestion of parts by, and consequence damage to, the engine, or injury to persons on the ground.”

In addition, several attachment links were found severely worn, and some became detached. In two cases, the thermal anti- ice (TAI) piccolo tube was found fractured. Investigation results show that the cracks are most likely due to acoustic excitation and vibration.

A broken piccolo tube, if not detected and corrected, in conjunction with forward air intake cowl bulkhead damage, could lead to in-flight detachment of the outer barrel, possibly resulting in damage to the engine or reduced control of the aeroplane.”

And by the sounds of it, not much action was taken? 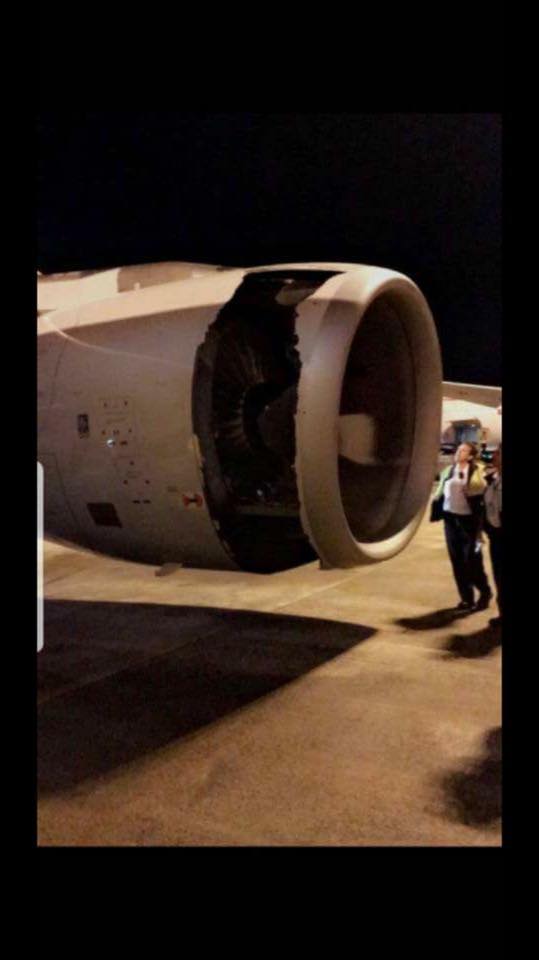 It would be great if that website didn’t keep spamming my phone with fake iPhone offers. If that’s your website, that needs to be fixed pronto.

As for the plane, well that’s going to be one hell of a repair job. Having been on an A332 and experienced engine problems on the flight, I’m not totally surprised this has happened.

Lets hope it’s not becoming a common affair with the A330.

Also, yes, it is my site. I am very sorry you experienced all those spam offers, I have never experienced it myself on any of my devices, which span 3 operating systems.