Cayo Coco (MUCC/CCC) Airport should be able to hold large jets since it does in real life (as you can see below, there are flights with the A332, 772, & IL9), yet when I try in IF, it says that the airport doesn’t have any available start locations for the aircraft. 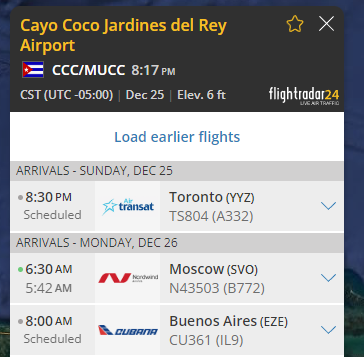 Thank you so much!

No problem. Have a good day

Non-3D airports tend to not be as realistic as the airport irl.

That’s not entirely accurate. Hundreds, maybe even thousands, of 2D-only airports are up-to-par with their real-world counterparts. This is a result of many airports being reworked within a few months to a year prior to the migration to the in-app editor.

Furthermore, some airports, such as MMU and TLV definitely not a plug for two airports I’m working on, will remain 2D-only for the foreseeable future, yet will be of the highest quality in an upcoming my update. We can rework fields without adding any 3D objects. 😎