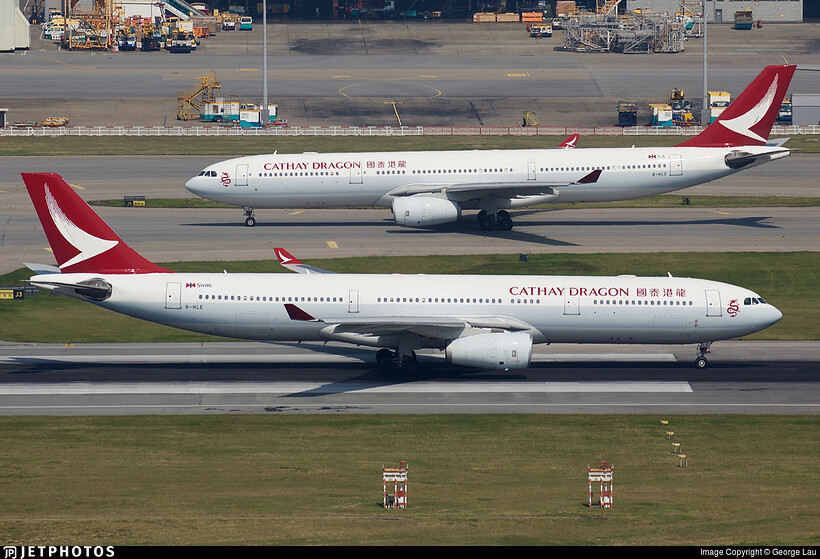 Hong Kong Dragon Airlines Limited (Chinese: 港龍航空有限公司), branded as Cathay Dragon (Chinese: 國泰港龍航空) and previously known as Dragonair, is a Hong Kong-based International Regional Airline with its corporate headquarters, Cathay Dragon House, and Main Hub at Hong Kong International Airport. As of 30 October 2013, the airline operates a scheduled passenger network to 47 destinations in 14 countries and territories across Asia. Additionally, the airline has three codeshares on routes served by partner airlines, one of which is Cathay Pacific.

The airline was established in Hong Kong on May 24, 1985 as Dragonair on the initiative of Kuang-Piu Chao, the airline’s present honorary chairman, as a subsidiary of Hong Kong Macau International Investment Co. It started operations in July 1985 with a Boeing 737-200 service from Kai Tak International Airport to Kota Kinabalu International Airport in Malaysia, after receiving an Air Operator’s Certificate (AOC) from the Hong Kong Government. The airline began services to Phuket, Thailand, as well as six secondary cities in mainland China on a regular charter basis in 1986. In 1987, the airline became the first Hong Kong-based airline to join as an active member of the International Air Transport Association (IATA).

Dragonair was the first local competitor for Hong Kong’s largest airline, Cathay Pacific, for forty years and since the airline’s inception, Cathay Pacific fought vigorously to block the airline’s flight-slot applications. In January 1987, the airline announced its expansion by the order of two long-range McDonnell Douglas MD-11 aircraft. However, after a heated hearing before Hong Kong’s Air Transport Licensing Authority, the Hong Kong Government adopted a one route-one airline policy, which lasted until 2001. The airline was not able to gain the scheduled routes it needed to compete effectively. The airline was disadvantaged in that Hong Kong’s financial secretary back then, Sir John Bremridge, was a former Cathay Pacific chairman.

It has an all Airbus fleet of 48 aircraft, consisting of A320s, A321s and A330s. Cathay Dragon is a wholly owned Subsidiary of Hong Kong’s Flag Carrier Cathay Pacific, and is an affiliate Member of the Oneworld Airline Alliance. Out of the 48 Aircraft, 25 of them are A300-300’s.

The airline’s original livery consists of a thick red-colored horizontal strip along a white-colored fuselage with a red-colored vertical stabiliser . The airline’s traditional Chinese and English name and its logo are in gold color and are painted on the forward fuselage above the red horizontal strip and on the vertical stabiliser, respectively.

The previous livery is in white color with a red dragon on the cowling and on the vertical stabiliser and the airline’s name written in Chinese red lettering and in English black lettering above and below the front passenger windows, respectively. In addition, there is a 30 cm Oneworld logo next to the first left door and a Swire Group logo on the aft of the aircraft. In 2016, Along with the re-branding of Dragonair to Cathay Dragon came the need of adopting a new livery to match the Cathay brand. The new livery is similar to Cathay Pacific’s new livery in the tail logo and font. The major difference is instead of the Cathay Pacific green theme, it has a light maroon theme. The titles say Cathay Dragon along with Chinese lettering reading the name. Dragonair’s Dragon logo has been retained and appears next to the cockpit windows. The new livery first appeared on an Airbus A330-300’s and are as of today in 2019 features across a wide amount of A330’s in their fleet.

To me Asia is a very dear continent, that I love to visit. Hong Kong plays a major role in the world politics and finances. And Cathay Pacific handles the majority of Hong Kong’s annual traffic. Transporting people of all class and purpose from and to their Hub, Hong Kong. As Cathay bought Dragonair and rebranded it as Cathay Dragon, they’ve expanded throughout East Asia, South East Asia and South Asia. With daily flight from their Hub to a wide variety of destinations in China and in Asia as whole. I personally would love to see Cathay Dragon, now as rebranded, fresh and new in Infinite Flight. The route options are endless, where you will be able to fly to numerous destinations with flights to multiple destination withing China but also branching out towards places such as Penang (Malaysia), Phnom Penh (Cambodia), Dhaka (Bangladesh) and Fukuoka (Japan). Many of these destination are ones that Cathay Pacific doesn’t operate to, which they’ve left Cathay Dragon to cover up for, as they’re in the same group.

It’s a brand new fresh rebranding of Dragonair, today Cathay Dragon, which we need in Infinite Flight. Something that is Hong Kong based, shares a lot of similarities with our current well known Cathay Pacific yet offers something new. Not only will you be getting new routes along side old ones to enjoy, you will also get a sprawling new livery to show everyone and with the new livery comes the Pride of Hong Kong.

I’ve done mine, now please do yours. If you also want to see more wide body jet’s used by airlines from Hong Kong other than Cathay Pacific, then Vote for this feature request. Every vote counts and shows that you also want to see Cathay Dragon A330-300, hopefully in the near future in Infinite Flight 🙏

Thank You For Taking Your Time To Read Through What “Cathay Dragon” Stand For. Their Commitment And Influence In Today’s Modern Air Travel, Which Will Surely Leave You Satisfied On Your Flight. Once Again, Please Don’t Forget To Vote, To Give Cathay Dragon’s A330-300, A Chance To See The Day And Night Of Infinite Flight! 🥂

Waaaait, I’m trying to fix this, hold on a sec XD

Thanks for everyone trying to help me, @Nate_Schneller, @Lucas_Piedra, @SimpleWaffles, @Nathan. And also thanks to @Chris_S for being able fix the formatting, I’ve now learned how to properly create them now :)

Is it okay with you if I add the words ‘(New Livery)’,because we already have a feature request for the old one.

Previously it was called Dragonair, which we have a Request for as you said. But now it’s called Cathay Dragon, so I see no reason to add “New Livery” when they changed the name completely. People will be able to tell what is old and new by reading he description on the feature request :)

Cathay Pacific new livery on the 777 and A330 would be amazing. Hopefully in the rework of the A330 they will implement it. Once Cathay Pacific and Cathay Dragon has been updated to the fleet, HKIA will be so beautiful on IF. Honestly can’t wait for it to happen

Yeah it does actually, never though about it before. Nice catch there :)

It would be lovely if you were to spare a vote for this beautiful livery, since it does resemble your national flag carriers livery ;)

I cant vote for that.
Its limited for me

True, but this is getting irrelevant.

With Update 19.1 around the corner in its final testing stage before being pushed out to the App Store / Google Play Store, here’s a late shot at voting for the Cathay Dragon A330-300 Libery, to make its way into the up and coming update that our beloved developers are working on :)

All your support counts, and I would love to see this aircraft making it into 19.1 somehow. The chances are getting slimmer each day, so your words now may make all the difference.

Cathay Dragon - Subsidiary of Cathay Pacific, and based in Hong Kong!

Voted for this to be added, it would be a great addition.

You got my vote! Such a nice suggestion!

Hope this gets added

I do too, fingers crossed that it’ll come one day.

Wow, this is quite possible the most detailed feature request on the forum 😂 I’ll try to free up a vote for this :)

Don’t forget the capital of Malaysia “Kuala Lumpur”. I used to live there and visited Hong Kong 4 times every year for 6 years, and it was almost always flown by a Cathay Dragon A330 (after 2015 at least).

Thanks for the support Vinnie.

Would never forget KL, but added some of the lesser known routes, so if and when this livery gets added, people may find some unsual routes to try ;)

Anyhow flying KL-HKG is a must with Cathay Dragon A330.

Another Cathay Dragon A333 livery (The Spirit of Hong Kong) 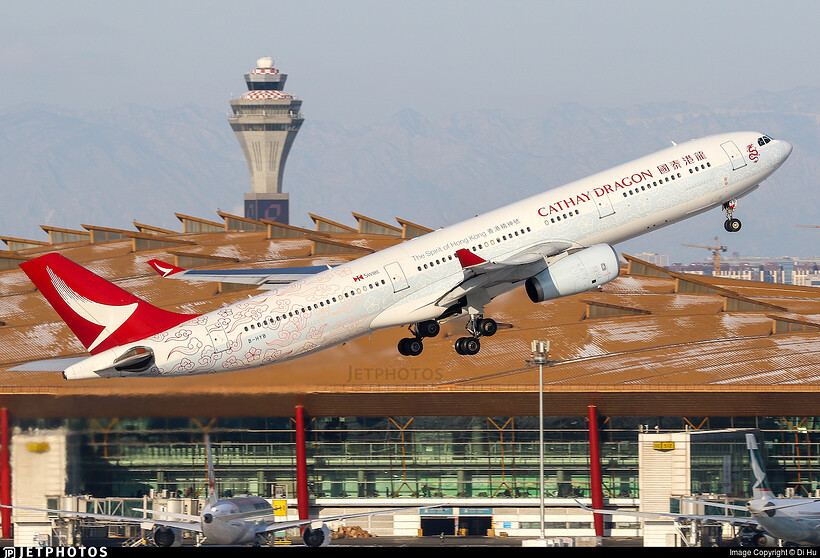 B-HYB. Airbus A330-342. JetPhotos.com is the biggest database of aviation photographs with over 5 million screened photos online!