I’ve been trying to upload screenshots for “Community Members Spotted on Live.” I’ve been doing it the same way I always have and now is says that its an “unauthorized file” and to use .jpg or .jpeg.

My method has been text myself the screenshot from my iPhone using iMessage. I then use iMessage on my MacBook and copy and paste the images from my chat window to the forum itself. The files where .png and they worked fine in the past.

I’ve never had a problem doing it until now.

Does anyone know if something has changed? 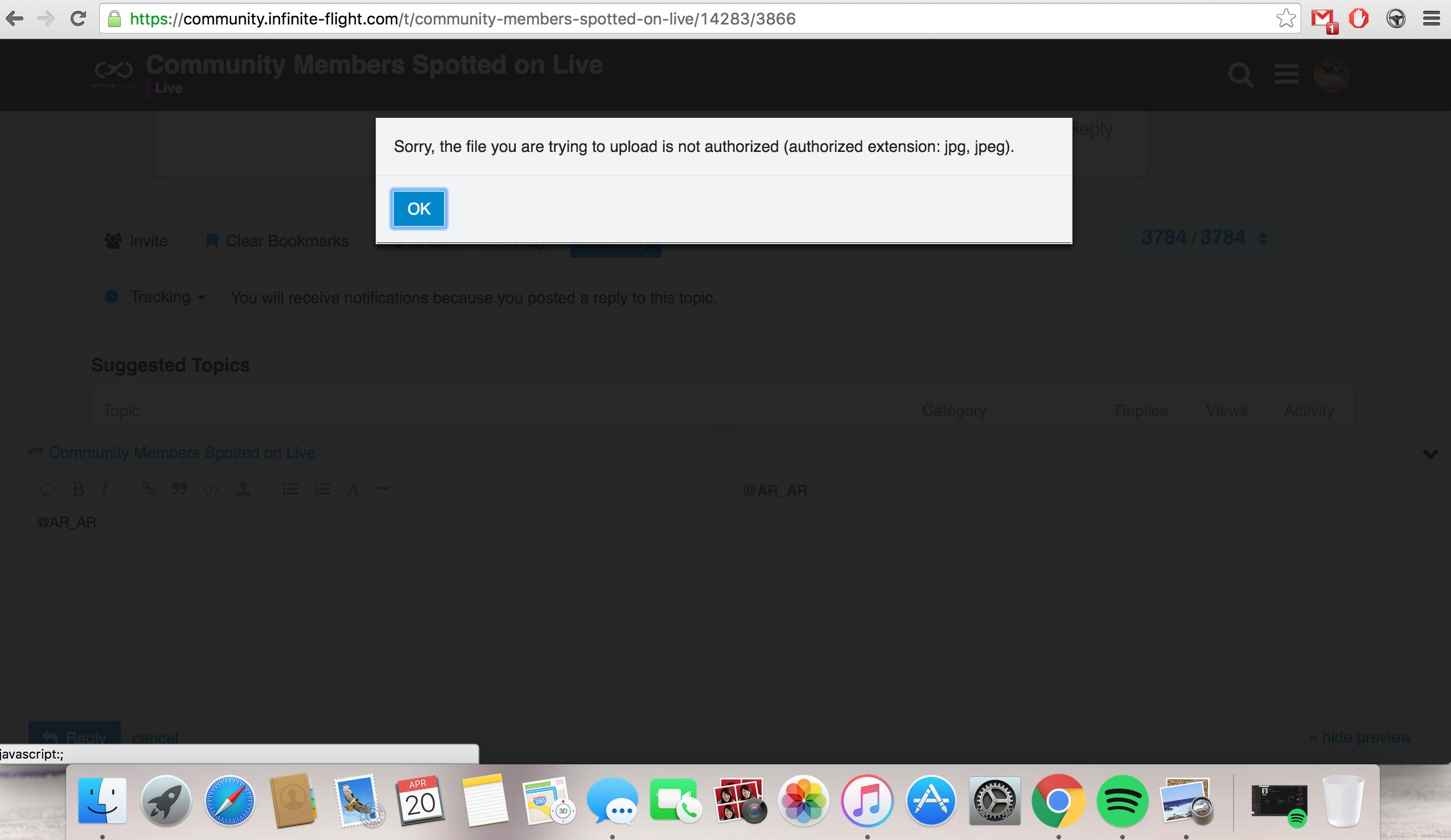 Maybe these could help you out.

Hello guys , I can’t upload any pictures to the community ! It loads al the way to 100% then just stays at 100 and nothing happens Anyone knows what I can do ?

I have this problem too. Try uploading to imgur, then past the link. The forum will automatically show the image.

It’s not a sizing issue. Because I’ve had that problem in the past as well, but I got around it by opening the file in “Preview” and it would work. I believe its a file compatibility issue.

And one of the spotted pictures had you in it too!! Lol

Yeh maybe it is a file issue. Try out Carsons method.

And one of the spotted pictures had you in it too!! Lol

Imgur works. I just wish I didn’t have to go through a third party because they basically own your picture now. I’d prefer my method if possible, but I guess you gotta do what you gotta do.

I added a screenshot of my error message (through imgur). It’s wierd because I converted the files to JPEG, and they’re 1.1MB so I don’t see the problem?

There shouldn´t be problems if they´re JPEG´s and have a 1,1MB size. Maybe you need to reset your browser.

If the problem still persists then maybe create an account on Discourse and create a post stating your problem.

In the meantime I’d say stick with Imgur.

Maybe something on your file gets corrupted with your current method. Take a screenshot and download it directly to your MacBook, then try to upload it here.

I have when I converted the file to .jpeg it saves automatically to my computer. To no avail :(

The problem is right there. You said you were uploading a .png. The pop up says they only support .jpeg and. Jpg

I converted it to .jpeg and re-uploaded again and yet nothing happens. I even went through actual photos I took that were natural .jpeg and they still didn’t upload.

I am running a “silent” test to see if restricting the type of images that can be uploaded would really impact ppl. Our image upload storage is starting to grow rapidly since ppl seems to upload large PNGs very often. Most of the time, JPG/JPEGs are perfectly suited for pictures and screenshot and can take a lot less space than their equivalent PNG.

JPG/JPEG files should upload fine as long as they are less than 3MB in size (hopefully a lot less).

This is not final, might change in the future.

I counsel you to edit them, cut sides a little, I have solved so.

Isn’t there a plugin you could use to automatically convert and resize images?
That would save you a lot of ‘trouble’.

That’s true. I was starting to think about the amount of storage for the forum a couple weeks back because there is a lot of pictures on community spotting and other threads.

Thank you for the explanation.

I found out that Paint helps when you want to resize photos.

So you can no longer upload screenshots? I’m trying to do that and it doesn’t work.

You can, but I think there’s a limit to the size of the image. Try reducing the quality, worked for me.