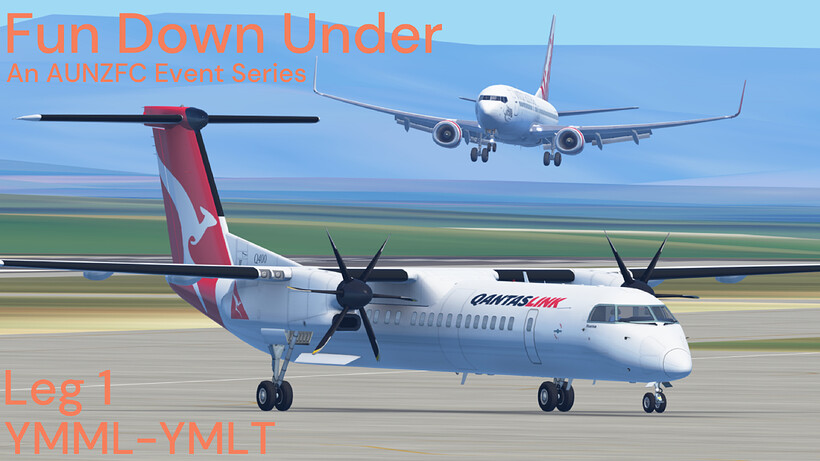 Welcome to Fun Down Under!

As part of our launch, we decided to host an event series, covering Australia & New Zealand in 1 tour. This event series has 21 legs, with aircraft from the tiny SR22, to the C-130 and beyond. Are you ready to embark on this massive adventure?

The airport comprises four terminals: one international terminal, two domestic terminals and one budget domestic terminal. It is 23 kilometres (14 miles) northwest of the city centre, adjacent to the suburb of Tullamarine. The airport has its own suburb and postcode (Melbourne Airport, Victoria, 3045).

Launceston Airport (IATA: LST, ICAO: YMLT) is a regional airport on the outskirts of Launceston, Tasmania. The airport is located in the rural area of Western Junction 15 km (9.3 mi) from Launceston city centre. It is Tasmania’s fastest growing airport, and the second busiest in the state, after Hobart International Airport; it can also run as a curfew free airport. In the 2007/2008 financial year, the airport had a record 1.1 million passengers, up 10% on the previous year; 255,000 passengers passed through the airport in the three months to 30 September, up 7% on the previous year. 309,000 passengers passed through in January – March 2008, the highest ever number in a calendar quarter, up 11% on the previous year. It is currently Australia’s 13th busiest airport, handling 1,126,572 passengers in the 2008–09 financial and 1,124,000 passengers in the 2009–10 financial year. The total number of passenger movements through Launceston Airport is projected to increase annually by 2.7 per cent during the forecast period to 2,000,000 in 2030–31. The expected growth rate reflects slower forecast longer term economic growth in Australia, the maturation of the impact of low-cost carriers on passenger movement growth and an expected increase in domestic airfares.

For this event to run smoothly, we ask all participants to:

~ Maintain at least 10NM of separation at all times

~ Allow all Qantaslink aircraft to depart before anybody else is able to pushback. This is due to the speed of the Q400 compared to the A320 and 737-800.

~ Immediately despawn after you’ve landed in Launceston, and have shut down your engines. This is to make room for other inbound aircraft, as there are only 6 gates in Launceston.

More gates will be added if needed

Those that wish to participate in this event, however are unsure that they will make it, are more than welcome to be placed onto the standby list, until they know if they will be able to make it.

We are the Australia & New Zealand Flying Club. Our mission is to deliver one of Infinite Flight’s top virtual organization experiences, covering all areas of aviation. From the extremely popular commercial sector to the never before seen medical sector, we’ve got something to please everyone. Even better, all our divisions (with the exception of the Military Division) allow you to fly what you want, when you want, where you want.

Sure thing @Luke_L! You’ve got the gate you requested, B26. See you there!

You’ve got it @Ash_Rand! You’ve got the gate you requested, G41. See you there!

No worries @Thunderbolt! You’ve got E02. See you there!

tbh I thought this said Fire down under not Fun down under.

Could I please grab a B gate?

Absolutely @TimR! You’ve got B28. See you there!

The event PM has been sent out to all participants. If you are participating in this event, make sure to check your inboxes.