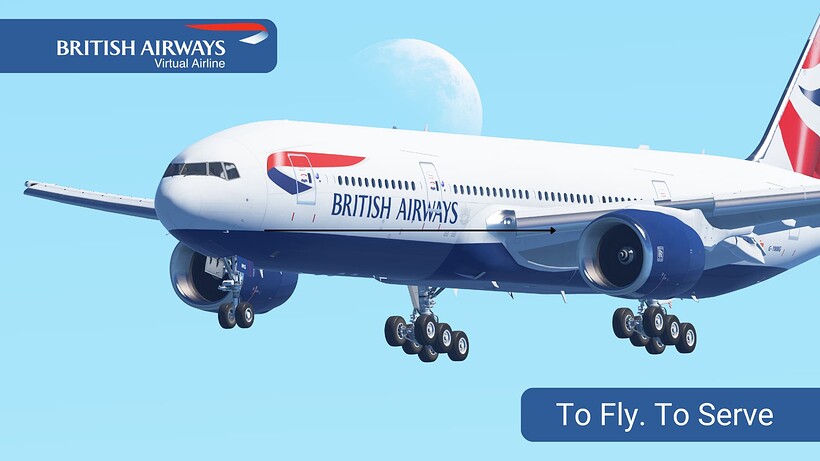 Welcome to British Airways Virtual, a Virtual Airlines dedicated to replicating the professionalism and grandeur of the World’s Favourite Airline; known for more than 100 years history, diverse fleet and for flying more people to more countries than any other airline.

As a well respected Virtual Airline, and one of the earliest VAs to form seven years ago, we boast a large pilot base, partnerships with numerous other VAs, and years of experience in running a successful VA. Our friendly staff members make BAVA an exciting and welcoming environment to further your love of flight, and with our regular events, weekly featured routes and Career Challenge there’s never a dull moment when flying with us.

At BAVA we benefit from a huge variety of in-app aircraft, with nearly every aircraft in the British Airways fleet represented in app, from the miniscule CRJ700 to the majestic DC10, or the unique A318 to the enormity of the A380; we are able to accurately reflect the procedures of British Airways from the early jet-age right up to the present day.

Our Crew Centre is totally designed in house, and has numerous features such as a Career Challenge, personalised logbook and ACARS functionality.

At BAVA we have many opportunties to earn flight time multipliers to make climbing ranks a breeze. If that wasn’t enough, we also offer pilots a wide selection of routes (with multipliers) each week from across the OneWorld Alliance, as well as annually partnering with a different Virtual Airline to offer pilots special routes from outside our partner network.

With BAVA, when you unlock an aircraft, you unlock all available routes that it offers. At Rank 2, you’ll have the choice of commuter hops from Miami to Tampa on American Airlines, or transatlantic services out of Shannon on Aer Lingus; just think, with BAVA you’ll be able to operate Long Haul services at just Rank 2!

We also offer one of the most diverse route networks of any Virtual Airlines, with British Airways routes stretching from the Azores to the Falkland Islands, and from Bishkek to Brunei. After all, British Airways carried more people to more places than any other airline.

Our codeshare network is equally extensive, from short Vueling hops across Europe, Fiji Airways transpacifics to ultra long hauls from the Middle East to New Zealand on Qatar Airways; we have codeshares with over 20 airlines, and through partnerships are able to offer Pilots routes to fly on even more.

At BAVA, we reward pilots for their commitment to the VA and therefore only promote from within our VA. Our staff team includes:

The joining process for British Airways Virtual is simple. We ask that you fill out our application form, and our Recruitment Manager or another member of our staff team will make contact with you to proceed with your application. We have a 20 question test and require a pass mark of 80%, however, you are welcome to retake this test if you don’t succeed on your first attempt. Our test requires a basic knowledge of flight and ATC principles and some awareness of British Airways’ operations. On completion we invite you to join our busy Discord server.

On joining you will immediately gain access to a wide range of aircraft, with seven different airlines represented. You will be able to fly British Airways Cityflyer routes out of London City, Edinburgh, Southampton and other regional UK bases, as well as access to British Airways’ historic network out of Birmingham and in France. 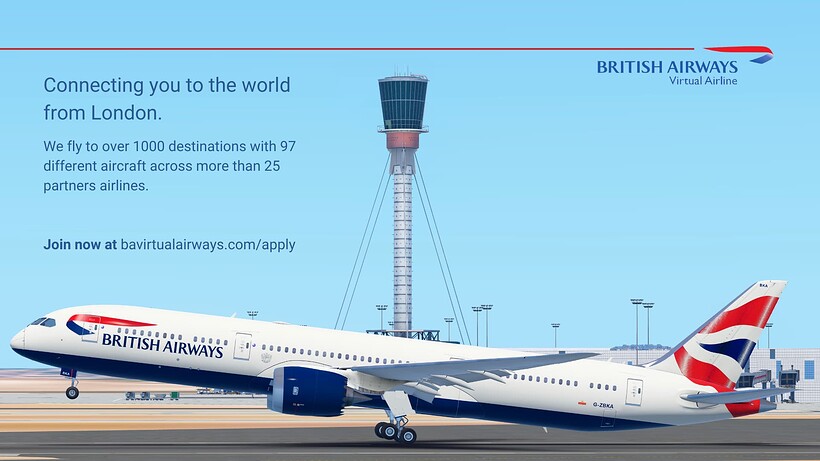 Brilliant VA and well worth joining!

Brilliant VA and well worth joining!

Thank you! Glad to have you in our VA.

Beautiful thread! We can’t wait to see the future of this successful VA.

We appreciate the feedback!

Thank you! Glad you liked it

@BritishAirwaysVA this is a wonderful thread. Continue the great work. The future hold great things for this VA.

I love this VA, one of the Best For Sure!

@BritishAirwaysVA this is a wonderful thread. Continue the great work. The future hold great things for this VA.

Thank you, appreciate the kind words! Wishing you the same.

I love this VA, one of the Best For Sure!

Thank you for being a part of the BAVA family!

This thread is amazing!

This thread is amazing!

Thanks so much for the kind words. We appreciate it!

Lovely thread BAVA team, if I do say so myself. Great VA to be apart of and I’m grateful for the opportunity to assist as Co-Recruitment Manager.

Lovely thread BAVA team, if I do say so myself. Great VA to be apart of and I’m grateful for the opportunity to assist as Co-Recruitment Manager.

Thanks for being a part of our leadership team and believing in us! Cheers Declan!

Thank you for choosing to fly for BAVA! 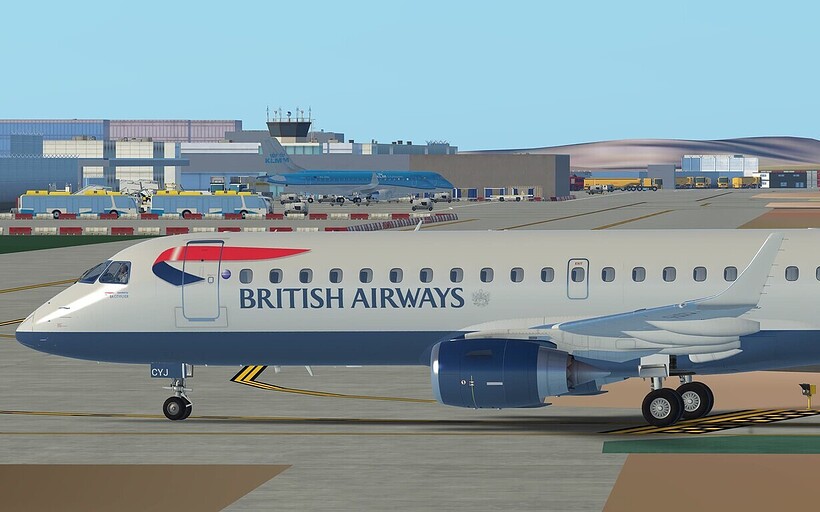 The reworked E190 will come in our BA CityFlyer livery. We can’t wait to fly this from London City and our other sessional bases!

To celebrate the release of the E190, we will be hosting an open recruitment weekend. If you apply until 2022-12-11T23:59:00Z you will not be required to take our entrance exam and will be invite straight in to the VA.* 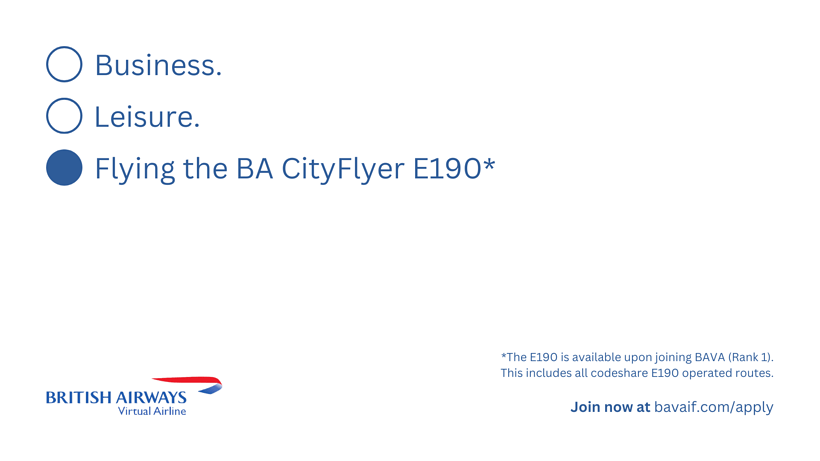 Hello, I can’t apply (the website doesn’t work) is that normal ?