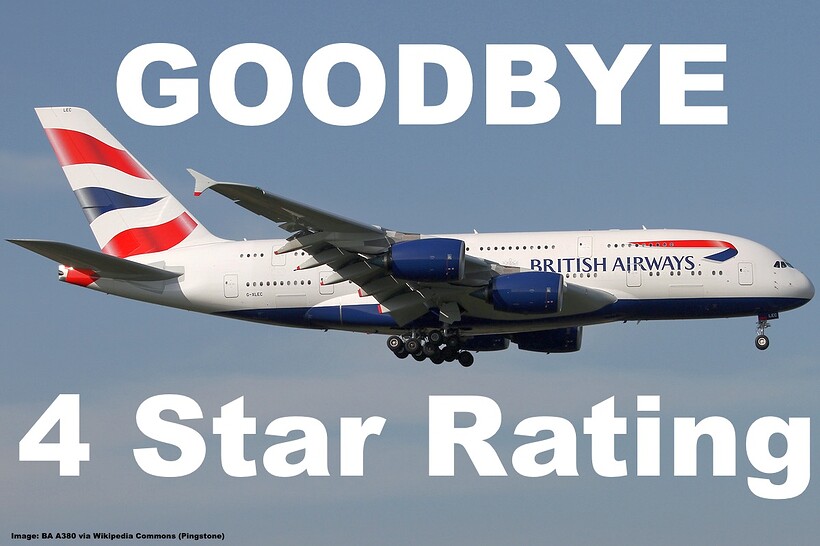 BA to be downgraded to 3 star carrier.

Read the link that British airways is being rated down to a 3 star airline even worse than Aeroflot.

Oh, that can’t be good for such a good airline… truly not that good 😐🙁

Hey, they are losing it because of their own performance.

I have to agree with @emil, BA’s customer satisfaction has drastically deteriorated over the few years

Staff are always lovely on the aircraft. Everything else lets them down. Seats are cramped, you now have to pay for food, entertainment is really poor and you have to pay for seat reservation and so forth. You also can’t bring checked bags on short flights with many fares.

If they’re going to copy budget airlines I really don’t know what they expect.

I am with Misha on this. They are trying to turn themselves into a budget airline but expect people to pay more.

I think British Airways should differentiate themselves from LCCs in order to compete by improving their service quality (Target Higher Class market). But not turning themselves into LCCs instead.

I think this is one of the disadvantages if a former LCC CEO becomes a CEO of a Full Service Carrier. They should’ve known that FSC’s strategy is different than LCCs

If they want to cut costs then it’s okay. As long as the price for the customers is still reasonable to pay. I meant I won’t buy a $500 ticket from LHR-CDG if you are only offered a 2 Star Airline service + You have to pay for everything

@SingaporeAirlines No, for $500 you would get a Business Class fare there and back and have some money for Duty Free.

In my opinion the prices for BA are quite cheap. Business Class to Larnaca and back is only $700. That’s very cheap considering a 5hr flight there and back.

If they’re going to copy budget airlines I really don’t know what they expect.

And lots of legacy carrier are thinking about doing the same thing smh. Haha, U2 will be considered a premium airline in 5 years.

Just an illustration as I’m not sure the exact price between CDG and LHR. But at least, you got my point right? 😉

I ve been in three flights of them (long Haul) and the service was terrible, the FA’s were really Unfriendly, and this was 3 years ago.
The only thing that saves the airline is their other aspects, like the IFE or the pilots

What is BA doing? Why are they going down. I remembered they used to be part of the KLM, Air France and Lufthansa group. If they don’t fix themselves BA will go down under.

Probably is the customer incidents that are happening recently. For example when a time all the airplanes stopped flying to destinations

I really hope this happens, they offer nothing more then nicer crew but that’s because of how they are trained, as others have said they operate basically like a low costs airline so they deserve to have their rating dropped and have you seen how dirty some of their planes are and outdated? We Brits should be ashamed our flag carrier is so 💩

What would you prefer then? Easy jet? A company that isn’t even able to fly to America. Or perhaps RyanAir which isn’t even British. The only realistic competition is TUI - but even on a bad day, British Airways has better staff, facilities and aircraft than them. And don’t even get me started on Thomas Cook. Please do not make such outlandish comments, when people work very hard to maintain Biriths Airways.

British Airways’ product has always been consistent for me and I have flown with them all my life. I for one am not “ashamed” or embarrassed to call a really great company and airline my national carrier. So please do not generalise a race, either

Well try fly another airline and you will see the difference, British airways offers much less then Qatar or Emirates. Not to mention they have cheaper prices, I can have my own opinion and you can have yours but the general consensus is people don’t like BA.

Well try fly another airline and you will see the difference, British airways offers much less then Qatar or Emirates.

Well I don’t see any reason to make up stuff, I don’t see anything you are saying as offensive but I don’t like BA for many reasons and first class? Most normal people use economy so I base my arguments on that, either way the middle eastern carriers are cheaper, have newer aircraft and offer a far better hard product onboard their aircraft. Try flying them and you will see how different it is. Obviously there is no alternative to British airways as a flag carrier but the point is as a flag carrier they aren’t very good.

I must disagree! A lot of “normal” as you say, people can afford Bussines or First. My English teacher went Club World with his family to Miami these Easter holidays when there was a massive offer. He said he got it for nearly half price. I sometimes get to upgrade my flights to bussines to European countries for as low as £40. Everyone, pretty much, can afford that.