If I were to try and become a commercial pilot, what universities have the best flight school programs for that?

Schools and degrees listed in this document will grant you entry into the airlines for as low as 1000hrs instead of the standard 1500hrs.

University of Oklahoma is ranked no.1 in the country right now

I can’t tell you which program is right for you, but I can tell you a few things that ended up being important in my search, and in some cases knocked a school out on the spot.

I feel like those are some of the main points I took away from my own search, start with the list @DeerCrusher provided and then start digging. A lot of people in the aviation world will recommend a lot of different paths, go find data on those paths and work out which one is best for you. What works for you won’t necessarily work for someone else because of many reasons like financials, goals, region, etc. so go take everyone’s advice and then make the best choice for you.

Also know that there will always be issues, or there will always be things a school is missing. There is no “perfect program” but if you have as much data going in then you can be confident that regardless of what may annoy you about the school you chose it would have been a worse issue elsewhere.

I, like many I have meet on the IFC, are enrolled in some of these programs. I transferred from one university with aviation to another where I am no set. Had I known exactly what to look for, my second decision was clear as day. Scheduling is by far the most major issue for me. It can be an extreme pain when no getting scheduled. Just because it is the biggest program definitely doesn’t mean it is the best.

If you have any question, feel free to reach out! I’d be happy to share my experiences and how I interpreted other universities.

Scheduling is by far the most major issue for me.

100% agree on this. This effectively made my choice for me. I was coming in with my ppl and several programs basically wanted to hold me back till everyone else caught up, or they were out of flight slots already even though incoming freshman hadn’t registered yet meaning incoming freshman basically didn’t fly. Suffices to say the school was not forthcoming about this. They didn’t lie or try to hide it to be clear, but they didn’t put it in the brochure lmao

If you have any questions I’ll echo the same sentiment as @AviationReports, feel free to reach out anytime.

New one to add to the list that I just thought of, distance to the airport and how you will get there. Aside from dedicated aviation schools the airport isn’t on campus or within walking distance usually. If you plan to have a car then this is a relative non factor, but if you won’t have a car consider what the schools transport options are if there are even transport options.

if you are in a cloudy city or somewhere with lots of winds or storms then you may not fly for weeks at a time. Literally

Where is the Best Weather for Flight Training (In the United States) | JasonBlair.net 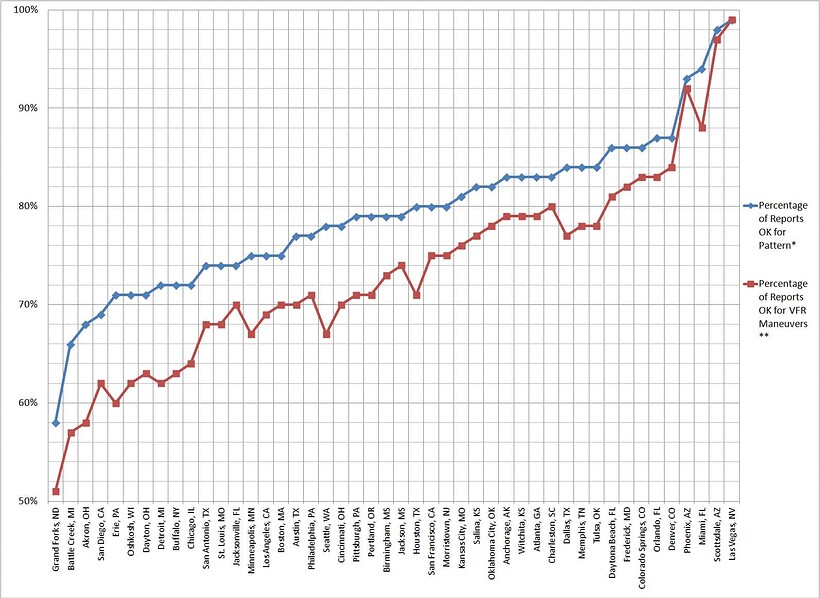 Based on this graph you would be interested to learn that UND tried to play their weather off as an advantage.

If you’re referring to an airline pilot, ATP Flight School is awesome, and you don’t have to do all the crap, debt, and extra classes and everything with a (nowadays) useless college, plus they align you with a job with one of their several partner airlines once you graduate their program.

I’m going to ATP Flight School in Dallas. It’s approx $80,000 which is the price of a single semester of college, it’s fast, I can learn what I actually need to learn, and they’ll set me up with a job interview when I graduate.

Out of curiosity, anyone know any good ones for the UK? Well, the company and applications based in the UK obviously the flying will be in another country due to slight weather issues…

$80,000 which is the price of a single semester of college

Where are you going to college?

ATP has a lot of pros, but it does have downsides, all your eggs are in one basket to name a big one. A lot of airlines do still want to see a college degree on the resume but the number that require that is dwindling.

Where are you going to college?

I’m not. Why should I? Extra money, extra classes, extra stress, extra lifetime debt, extra indoctrination, and overall not worth it.

I know what I want to do with my life, so yeah, I’ll focus on this path and have a backup or two that I’d also like to do.

Delta totally dropped any requirements or preferences about a degree, and all I’ve ever seen is “preferred but not required”

All I meant was it’s better for me to not take the college route. I did a lot of research of what ATP is like and the benefits and everything and I don’t see it being worth it. 👌

Scheduling is by far the most major issue for me.

UND no fly november had me switch majors fr. Make sure you go somewhere reasonable.

R-ATP is a big one. The reduced hour requirement is fantastic. Also networking is huge and the pipelines, yea you get a couple of programs through ATP, but the airlines place a large emphasis on their college pipelines. I think you’d be surprised, yes airlines like Delta will say they don’t require college degrees, however, airlines these days are now able to be somewhat picky, especially with an over abundance of FOs (ex recent hiring freezes). Delta’s employee culture is also incredibly conservative (mentality, not politically) as with many other airlines, they like the education. When you go through these interviews you’ll be placed in a pool of applicants and when they decide class dates, they go top to bottom. Who’s going to be at the top? College kids. They like to see that.

That was a bit rhetorical, I was just commenting on the fact that $80,000 is considerably more then I will be paying for a full year at a school that is generally considered relatively expensive. Unless you are looking at some ivy leagues $80,000 a semester is way too much even factoring in housing and stuff.

Sure, but I think there are advantages I will get to in a second. You also save time with an R-ATP which pretty directly correlates to money.

I’d view that as a pro tbh. You will come out more well rounded and with a greater depth of understanding. I learned more in my introductory meteorology class than I did in all of my weather theory units in flight ground school thus far combined, and I am going for a full minor in that so there is a lot more I will add to that. Not to mention a better understanding of topics like physics, math, communication, business, etc. that may not be strictly required to be a pilot but will almost certainly make you a better pilot, and more well rounded individual generally.

Honestly not sure about that one. I have heard the accelerated pace of ATP can make it extremely stressful. Plus the vast majority of stress in college students imo comes down to how you manage it. Not saying it’s easy or that I am good at it, but stress isn’t some inevitable certainty of being in college more so than anything with deadlines and tests.

Sort of goes back to my first point with money. This may be true but depends on the financials of the individual and what aid they can get. Not to mention that as I already said to some degree this may be worth it.

Not so sure about this one chief

and have a backup or two that I’d also like to do.

My point is not so much that you don’t have backup plans but that you are less prepared to execute them that someone who went to college. Not in all cases, but depending on your degree and what your backup plans are that could be a huge boost.

Delta totally dropped any requirements or preferences about a degree, and all I’ve ever seen is “preferred but not required”

Yeah it is definitely changing, but all the sentiment I have heard from airline reps is that they still like to see it. Two people with the same hours, same standing, identical twins even, but one has a college degree and the other doesn’t, who do you think is getting the job?

I don’t mean to say that ATP has no benefits or that it is not the right thing for anyone, nor do I mean to come off as attacking you or your path, I just want to throw out there that a more traditional university path isn’t all doom and gloom in my opinion.

Something which I’ll add from my personal experience and what I’ve noticed as of now. I’m doing flight school in Europe, however America is what I called home up until I moved. In Europe, the flight training is a lot more theoretical focused, so it isn’t valuable to have someone sit through a college course, and then through a flight school course. Sort of contradicts each other. In the United States, flight school is much more focused on the flying part. Since there isn’t as much classroom time, that’s why the college degree is so good to see. It’s more of how each system is structured, and what works where

I will admit that America is too focused on the “you have to go to college or else you won’t succeed” motive, but America is also structured in a way which leaves little wiggle room for opportunity if you don’t have a college degree

I would say on the America side that there is a big difference between doing your training part 61 and 141, part 61 can have almost zero classroom time but part 141 has a lot, like some of my classes have attendance monitored by the FAA so they take the classroom time seriously. I can’t speak to the European side and how that compares though.

In Europe, the requirement is 75% attendance of classes for the flight school to issue the certificate of completion of the theoretical course. The theoretical exams are quite hard though, so realistically, you don’t want to miss any classes