Has anyone else encountered this issue before? I’ve been witnessing these a lot lately where an aircraft goes unknown and white and we simply have no way of communicating with them even they are able to communicate with us. 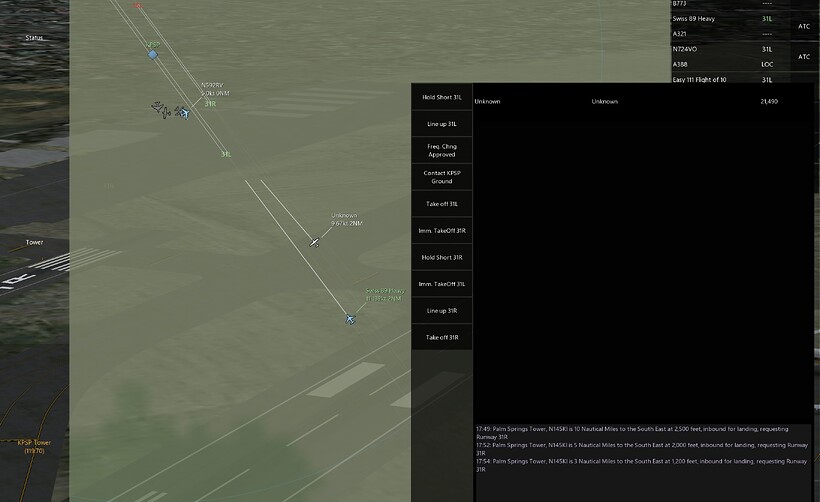 I’ve also been noticing a lot of connection drops on TS1 where all flight strips go orange and then everyone on the map disappears only to return a few seconds or a few minutes later as a new tower session.

Just had that occur to me as I was controlling KSWF.

Yes! Very frequently all comm cuts out. I commented this on an earlier post but others just said to get better WiFi. There’s got to be more to it than that. I’ve had the same WiFi for a while and this has only been happening for about the last week and a half or so. Even on cell data.

I’ve had this on TS1. If this happens, then I’ve found exiting and rejoining at the same airport works.

It’s usually caused by an error somewhere between the user’s device and yours. Could be that it didn’t register their info properly when they started the session, causing it to return data as unknown. Most likely connection issues. If a developer/tester’s aircraft type displays as unknown (and everything else is shown properly), then it’s just meaning that the other user is using something you don’t have (new plane for example). :)

Today I have control ~25min at KPSP. But I’ve stop controlling because I could not contact some aircraft on my frequency. [image] That was happend from ground to tower frequency. I have request these aircraft to contact tower, and I hear a "request take-off but see nothing :( Sorry aircrafts on frequency.

I can resonate, it’s been happening to me since the last week as well, and I’m 100% sure this isn’t because of my wifi but rather a server problem or something of that sort because I don’t experience this issue with anything else except while using IF.

I have also experienced this issue whilst controlling on TS1, the last time I experienced it was today.

It happened to me today during a ATC session on TS1 at EGBB.
I could see all,aircrafts but one, as unknown, I could not communicate with him.

It happened to me yesterday during my EHAM-EDDL flight. I couldn’t recieve answers from the ATC. Now I know the reason is that I was shown as ‘Unknown’ for the controller. Well, even largest software corporations have bugs in their products, and as for me, this small bug in IF is not significant at all! )
For the pilots (if you don’t recieve any answers from the ATC for 5-10 minutes) I think turning to some less busy and uncontrolled airport would be the best descision… After landing you can restart the app.
For the ATCs (if ‘unknown’ plane continues his approach to your area) just imagine that it is a plane in an emergeny and let him land! :)))

it seems like the server crashes few times this week

I controlled KPSP earlier today and it was crashing every 2-3 mins before restoring and then crashing again. I guess it’s time for a server reset.

@BaldEagle and I have both been having this issue on the Expert Server.

I’ve experienced this many many times before, I can still communicate with the pilot but that happens most of the time to me when the pilot is switching from ground to tower or tower to ground or tower to departure/approach/centre.

Just to add to this, our problem is very similar but slightly different, as in when the plane is white, they still communicate with ATC and the ATC menu still appears and ATC can communicate back. The purple bubble around the plane doesn’t appear (like in the original post) but all information about the aircraft is still visible (it is not shown as unknown). Maybe this topic should be in Support?

This is due to your selecting the aircraft before they are on your frequency, if you swipe right and then tap on them, it should go away. If it doesn’t, it’s most likely a connection issue

No that’s not the case, because I’ve had aircraft contact me while they were white and I never touched on them. Also, I touch on many aircraft in the airspace to check stats and also to give on guard message and they don’t turn white when they contact me. It’s 1 out of many aircraft that may turn white and stay white during atc communication. It does make it a bit difficult to operate especially when busy, as the ATC menu behaves differently when this happens.

I have also swipped them right and then clicked on them again and they stay white but communicating with them always works.