Brand new iPad 9th gen and still it will crash on final… this has happened about 4 times in the last week now and all on long haul flights. All that time wasted. What’s the point of flying if the game itself can’t handle the most exciting part?

Sometimes the demand of a long haul flight on a device can cause a memory issue or potentially the device could overheat and it will end up crashing. To avoid this you can try restarting the device frequently, and use the low power modes available on the device and in the app.

Try reseting the scenery cache. This clears it up and makes it run smoother. Just remember to keep doing this every so often.

I’ve got a 11 Pro Max iPhone, considered more than capable to handle max settings on IF, yet I’ve just had the app crash on final into LFPG mere minutes ago. And I’ve tried ALL the fixes. Cleared cache more time than I care to count, deleted/re-installed, erased most all replays, fly with a sky-facing camera, nothing. App keeps randomly crashing after long-hauls. This particular time I’d been in flight clearing 10 hours.

If you are running the app with all all the textures/rendering/3D density on high, This can lead to crashes happening on final.

Researched this round these parts a while back, my device is rated capable of taking all these aforementioned whilst running the sim. Yet, this is twice now -in span of I’d say couple weeks- the app’s crashed.

Yeah I have the iPhone 13 which is the latest one with the 13 pro and pro max and my IF crashed yesterday just after landing. Pretty weird for a brand new iPhone capable of max graphics and very high airplane count to be crashing just after landing. It also happened a few days ago

I thought it was just my iPad. Always crashes on landing:(

It is quite common for Infinite Flight to crash in mid-flight because the simulator requires a lot of resources that the device sometimes cannot provide.

To prevent this from happening:

I hope not to have forgotten anything and help to solve this problem which is very frequent I recognize it!

The thing is my device is more than capable of running on the highest settings. No lag or anything. If no device is able to run high settings without crashing then what’s the point of having the options?

I get annoyed because I’m paying for this app but I’m having this problem.

I know this has been happening for some time. So based on the previous feedback about iOS issues, I thought with the new update released yesterday these issues will be resolved. Guess what, my app just crashed as I was about to touch down at VHHH.
So I guess there hasn’t been a fix for these crashes on iPads as yet.
Until we get a fix I will have to fly out of the controlled airport az opposed to fly in. @VirgilMapleYM & @RyderK, I understand your pain.

It’s no longer as exciting as it was to fly anymore not knowing whether your 14/16/18hrs flight will land without any glitches.

Hope this gets fixed soonest

What iOS are you running?

I couldn’t have said it better myself. Good to know the pain is shared amongst even fellow ETVA members.

Echoing @Emmanuel_Mgilane sentiments, I too hope this gets a fix (soon).

One thing I miss seeing here;

When was the last time the ones who are having issues restarted their devices?
All devices have a limited amount of system resources, RAM. The longer the device is running, the smaller it becomes over time unless you restart.

iOS is pretty aggressive on this, and always have a rather small amount available. If you’re running 3-4 apps actively in the background, all graphics maxed, haven’t restarted in a couple of days, been flying for 8hrs+ and are approaching a 3D airport - it’s not unlikely your device will run out of resources and terminate the app using the most recourses which would be Infinite Flight.

@schyllberg I restart the device prior to every flight. That along with a RAM reset, sky-facing camera for the entirety of any and every flight. Using three third party apps in the background. Max graphic settings, max plane count. I thought of listing all the other conditions/states when the app’s crashed, but I’ve done just that in prior posts on two separate threads relating to this.

@schyllberg thanks for the response on the matter.
I know you have always been my favorite person to go to whenever I experienced issues with the app. I appreciate that very much.

In this case I am not sure what the real cause of the app crash is. And yes after 4 days the app is restarted. I now leave my device off for a maximum of about 8hrs to 24hrs after every flight. I have even gotten to the habit of deleting my replays.
I don’t have any 3rd party apps running concurrently with IF, except IF Assistance. My device is solely for IF.

I restart before every flight, no background apps running at all only IF.

What iOS are you using ?

Just to give an update on the issue. I have seen different topics on the app crashes with speculations on what the cause may be. I have just read a topic about storage and airplane counts etc. with everyone trying to get the app crash issue resolved.

After my previous post I decided to delete the app “again” and re-installed it. Changed everything to low mode with the exception of the TEXTURE QUALITY option left on high.

I did an overnighter from LTFM-SBGR on the A350 Turkish Livery. After being cleared to land with about 3nm my app crashed. I was so sure this time around that there will not be an issue. I even counted the number of aircrafts on the ground, 2 at parking bays 1 on the runway taking off. In the air about 4 on approach with 1 landing.

Armed with this info, I had my spirits high, only to be crushed. (Well… it’s safe to say that my aircraft dissappeared with everyone on board and never landed)

I believe there’s is an elusive bug that is affecting iOs that causes the random app crashes on iPads/iPhones, irrespective of the device model (am basing this on what I have read where the devices are not the same)

Just to support my statements above I have attached 2pics (not great quality az I took these from my iPad using a different device) but will kinda give an indication of what I mean.

Thanks in advance for your assistance in resolving this matter. 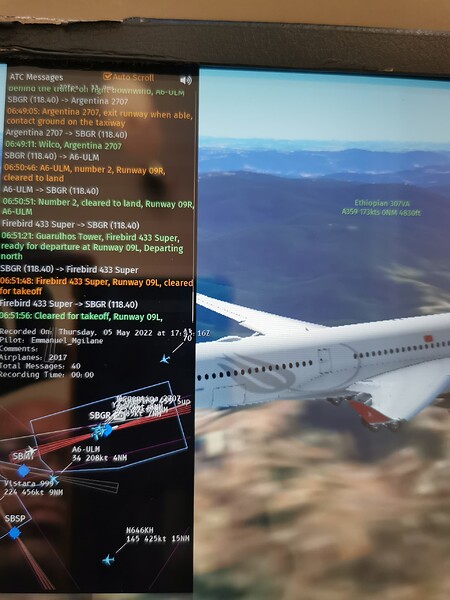 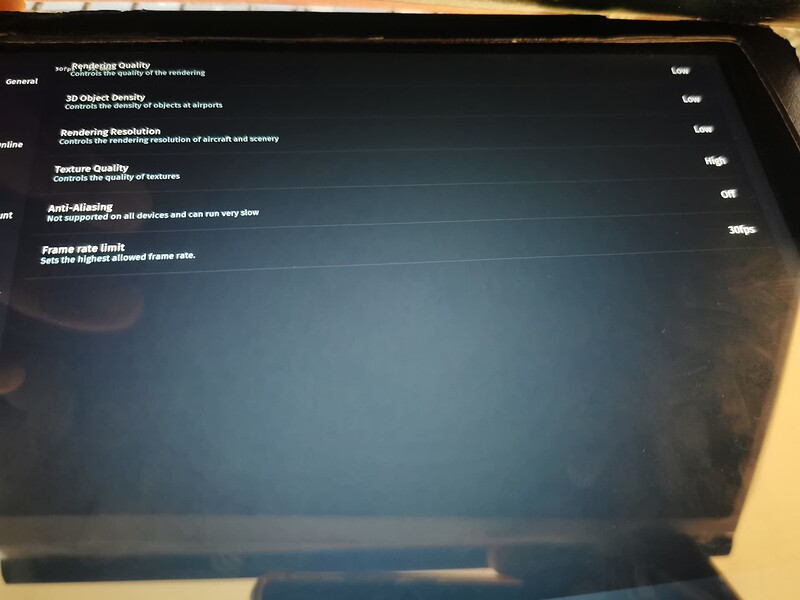 Damn even with all that it still crashed. I think you’re right there has to be a bug that’s been flying under the radar somehow.

Appreciate you taking the time to test it.