Simple flying just released pictures of ANA’s final a380!
Here is the article:

ANA’s Final Airbus A380 Shows Off Its Brand New Livery

All Nippon’s third and final Airbus A380 has rolled out of the paint show. The giant turtle of an aircraft sports an impressive Sunset Orange livery. The aircraft, named Ka La, is the final piece in the puzzle that is ANA’s Airbus A380 order. 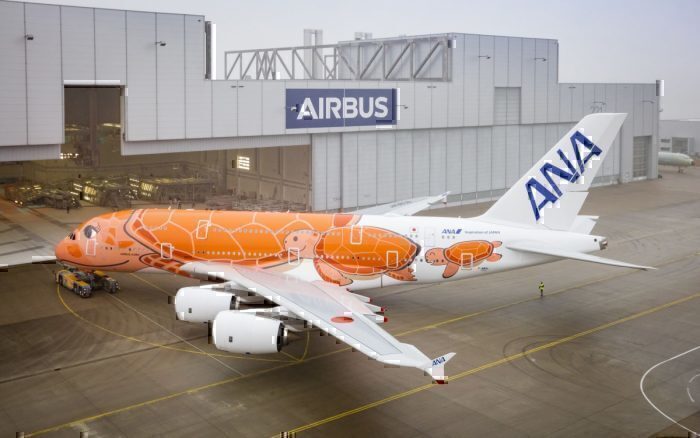 All Nippon Airways’ third and final Airbus A380 has rolled out of the paint shop. Photo: Airbus

All Nippon Airways has been slightly behind the rush when it comes to Airbus A380 deliveries. The airline placed the smallest order of any airline for just three of the aircraft. In fact, ANA received its first Airbus A380 after the end of the program was announced last February. 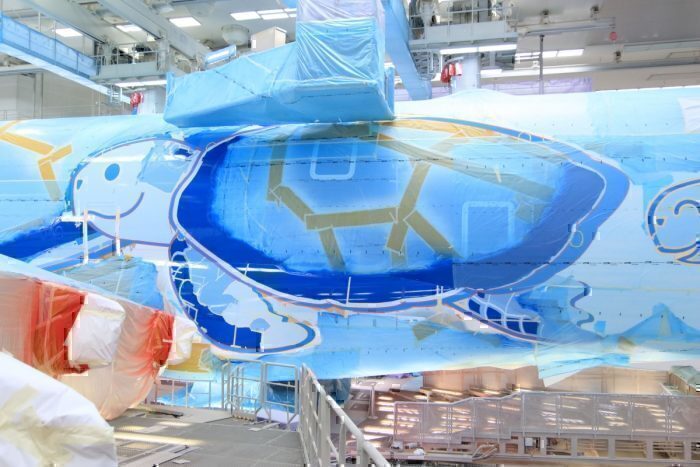 Each Airbus A380 has an elaborate paint scheme. Photo: Airbus

Having just three Airbus A380s may seem like an odd strategy for an airline. However, it is a strategy which ANA has spent a lot of time thinking through. They are using the A380 exclusively on flights to and from Hawaii. With the arrival of Ka La, the Asian carrier will be able to boost its Tokyo-Honolulu frequency to twice per day with the A380.

ANA has put an awful lot of work into branding the Honolulu route as the A380 route and it shows. That is actually the reason why each Airbus A380 is painted to look like a Hawaiian sea turtle.

There are currently no plans for the All Nippon Airways Airbus A380 to fly anywhere other than Hawaii. When the Airbus A380 goes twice daily on the route, it will be the only aircraft the airline uses to Honolulu. Currently, the Boeing 777 operates a handful of services to Honolulu.

The first ANA Airbus A380 is painted in an ANA blue paint scheme to represent the Hawaiian Sky. Photo: Airbus

Hawaii is a huge focus destination for ANA right now. The airline has pumped a number of resources into renovating its gate in Honolulu. In fact, the gate sounds more like an entire departure lounge with Areas for children and a separate lounge. Business and First passengers can board the upper deck directly from the lounge.

When all three of the Airbus A380s are in operation, ANA believes it will hold a market share of 25% of all of the seats between Honolulu and Tokyo. This sat at just 15% before the first A380 was delivered.

Have you seen ANA’s A380 yet? Which colour is your favourite? Let us know your thoughts in the comments!

I remember seeing this plane in Hawaii departing from Honolulu

I was on Maui at the time, I tried to get a flight to Oahu to see it arrive but I ran out of time

That’s crazy! I didn’t even know they few the a380 lol. Kinda surprised their only 380 market is in Hawaii though. Why not LA or something?

There is a huge amount of people that come from Japan to Hawaii, so I’m guessing it’s cause of the passenger capacity of the A380

Ahaha 😂😂 this definitely has my vote. The state of these 😂😂😂😂 love it

Edit: I’m dumb I thought it was a feature request… ☹️😐

Also would you rather go to LA or Hawaii? I would imagine that Hawaii Is a bigger tourist destination

Beautiful livery, especially in the orange!

Looks like an orange with a face on wheels 🤣

ANA delays receipt of Hawaii-bound Airbus A380 for 6 months