An American Eagle ERJ-175 operates by Republic Airlines reported a “runway trim” on departure from Atlanta. The crew reportedly had no pitch control for the duration of the flight. They managed to turn around, and make a safe landing back in Atlanta. The four crew, and six passengers are all safe, and were re booked on different flights, the aircraft is still on the ground in Atlanta.

Yikes, glad everyone was okay. Only 6 pax wow 😂

Ya, it’s unclear wether there was some sort of special circumstances like a repositioning flight, or if it was just that empty…

6 passengers? There was almost more crew members than passengers.

That happened to me in IF last month. That’s what happens when you try to compete against Delta at their largest hub lmao.

Has the ERJ ever suffered from a crash? I dont think it has

Here’s the most recent crash. 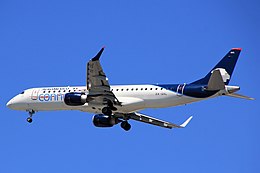 Pages for logged out editors learn more Aeroméxico Connect Flight 2431 (SLI2431/5D2431) was a Mexican domestic scheduled passenger flight bound for Mexico City that crashed on takeoff from Durango International Airport on July 31, 2018. Shortly after becoming airborne, the plane encountered sudden wind shear caused by a microburst. The plane rapidly lost speed and altitude and impacted the runway, detaching the engines and skidding to a halt about 1,000 feet (300 m) beyond the runway...

Uh, there are no pitch failures in IF…

Not 6 pax. The article is wrong. In the video you can hear the crew tell ATC they have 6 souls on board, which also includes 4 crewmembers. If there were any passengers, it would be just 2.
It could have been a repo flight.

Wow, I caught an in-progress emergency.
Thank goodness no injuries.

Uh, there are no pitch failures in IF…

If you disconnect AP in the E-Jets and haven’t recalibrated, it can nose dive or climb you unexpectedly. I wouldn’t call it a “failure” so much as the old model style-but I digress he may be correct in the fact that he had a “runaway pitch” sort of moment

My pitch somehow got unbinded so i count that as a failure.

That’s not just in the E-Jets, but I guess I see what your saying…

"The aircraft rose up and down multiple times as the crew struggled to gain control, claiming that they had been ‘fighting’ with the controls. "

That’s not just in the E-Jets,

I fly mostly A32X/A330, B73X etc. I honestly don’t have that issue with the newer aircraft models at all.