An airplane caught fire on the runway at Chicago’s O’Hare International Airport on Friday afternoon, according to reports.

O’hare Fire & Rescue teams conducted a fire drill earlier today, just for the real thing to happen a couple hours later. What a coincidence. I would drive down there and take pictures, but traffic is horrible around this time.

Reporting it was a blown tire. Nice to see people made it out with their luggage. WTF people.

And this is why you should stay alert during takeoff and landing. At least listen to the safety instruction even though you may have heard it a million times.

The dude says he’s never flying again. Lol. The odds of it happening are low enough but for it to happen twice? I wanna be on all the planes he’s on from now on lol.

I hope everyone is okay

Here’s a link to a video of the other side.
Pretty black! 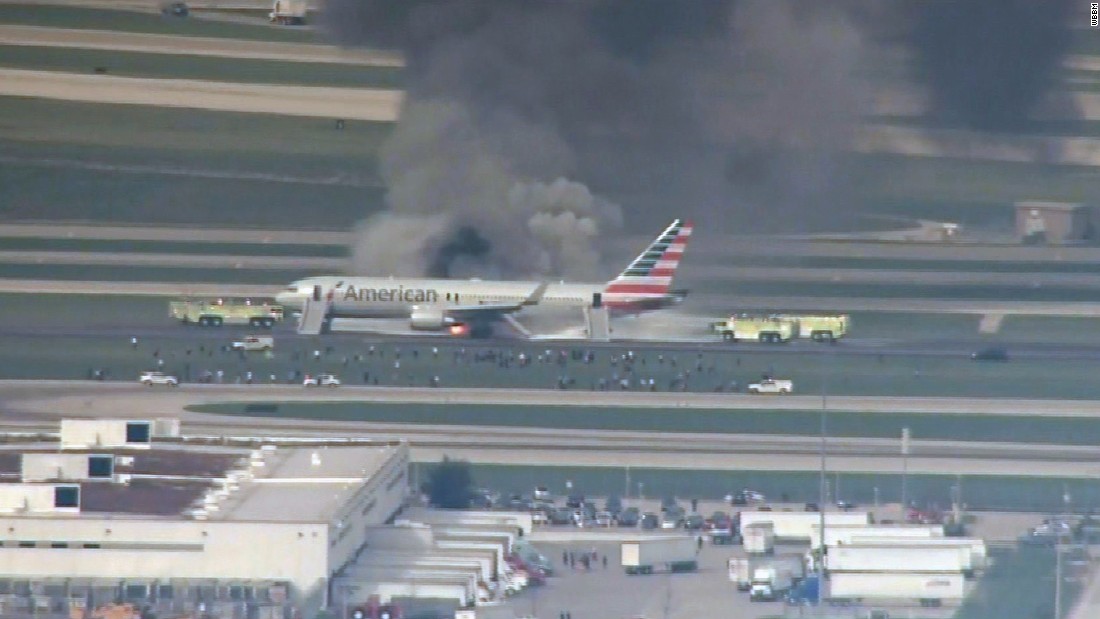 The right-side engine of an American Airlines Boeing 767 failed Friday during an attempted takeoff, sending debris as far as a half mile and passengers hurriedly down emergency slides onto a runway at Chicago's O'Hare International Airport.

Maybe the reason he won’t even flying again isn’t because of the plane on fire, but the stupidity of the people for collecting their luggage during the evacuation.

Looking from the video you can see something is not right

Never again? Dudes just in shock. If I ever said such a terrible thing, let my mother slap me in the face and call me Shirley. That was a very horrible statement, how dare he disrespect all the aviators like that 😡 lol.

This is what I hate:

It was unclear how the fire started.
The National Transportation Safety Board will investigate.
Other Boeing jets have been involved in runway incidents in the 13 months.
A Boeing 777 taxiing for takeoff at Las Vegas International Airport in September 2015 aborted its takeoff roll to London when one of its two engines failed. The following month, passengers aboard a Dynamic Airways 767-200 were forced to evacuate because of a fuel leak that caused a fire while the aircraft was taxiing in Fort Lauderdale. Both incidents are still under investigation by the NTSB.

This is an excerpt from the CNN website. I hate how american news broadcasts try to strike fear into the american people. “Other boeing jets have been involved in incidents” . Trying to relate a freak accident to more and scare people off flying. SMH

Thats why I prefer seeing videos or pictures. The media is fascinated by any sort of accident and need to exaggerate there stories to get views.

I bet some of the lessons learned with the Concorde may be why that wing is still there. Sad when it happens but as long as lessons are learned it may save someone else in the future.

Its a good thing they did not hit V1 as I don’t see that wing creating any lift. You can also see that vertical stabiliser has pieces hanging off.

Right but what are the odds of that happening to him again. It has to be insanely improbable

What is it with people risking their lives for luggage?!

Well that thing is going to be written off now. The whole wing is melted.

american airlines. no offence but they are a pretty bad airline but happy everyone is okay. fire maybe down to poor maintenance procedure. I hate how the media portray aviation after incidents like this happen all of a sudden all aviation is dangerous and that something needs to change. I hate how someone said i am never flying again this is a extremely rare occurrence. I think this is very bad for Americans Airlines image as many people who dont understand aviation will now think of them as dangerous after one incident.